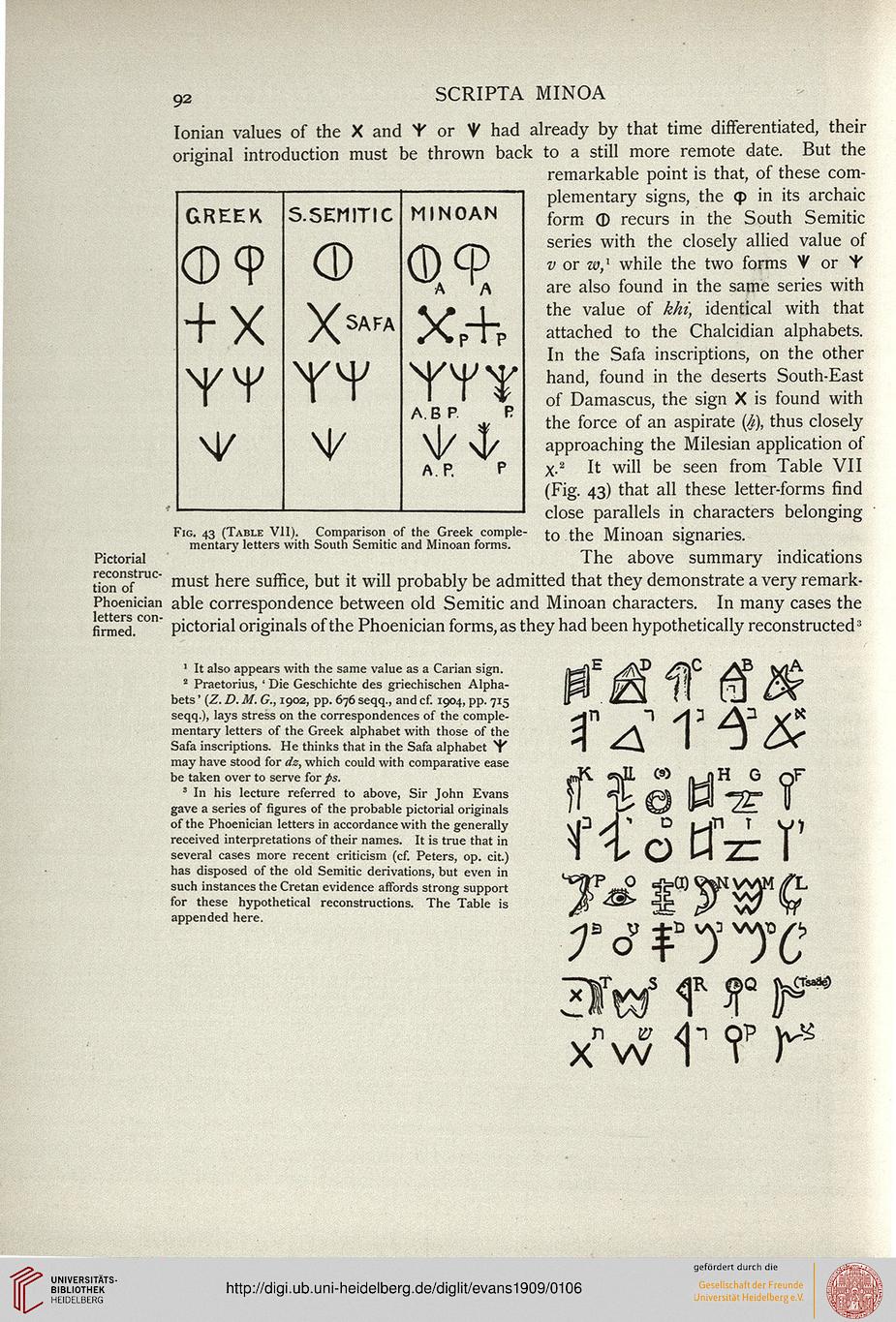 Ionian values of the X and t or V had already by that time differentiated, their
original introduction must be thrown back to a still more remote date. But the

remarkable point is that, of these com-
plementary signs, the <p in its archaic
form (D recurs in the South Semitic
series with the closely allied value of
j or ai,1 while the two forms V or f
are also found in the same series with
the value of kht, identical with that
attached to the Chalcidian alphabets.
In the Safa inscriptions, on the other
hand, found in the deserts South-East
of Damascus, the sign X is found with
the force of an aspirate (h), thus closely
approaching the Milesian application of
X.2 It will be seen from Table VII
(Fig. 43) that all these letter-forms find
close parallels in characters belonging
to the Minoan signaries.

The above summary indications

must here suffice, but it will probably be admitted that they demonstrate a very remark-
Phoenician able correspondence between old Semitic and Minoan characters. In many cases the
pictorial originals of the Phoenician forms, as they had been hypothetically reconstructed -

1 It also appears with the same value as a Carian sign.

1 Praetorius, ' Die Geschiehte des griechisehen Alpha-
bets ' (Z. D. M. C, 1902, pp. 676 seqq., and cf. 1904, pp. 715
seqq.), lays stress on the correspondences of the comple-
mentary letters of the Greek alphabet with those of the
Safa inscriptions. He thinks that in the Safa alphabet Y
may have stood for <fe, which could with comparative ease
be taken over to serve for ps.

' In his lecture referred to above, Sir John Evans
gave a series of figures of the probable pictorial originals
of the Phoenician letters in accordance with the generally
received interpretations of their names. It is true that in
several cases more recent criticism (cf. Peters, op. cit.)
has disposed of the old Semitic derivations, but even in
such instances the Cretan evidence affords strong support
for these hypothetical reconstructions. The Table is
appended here.