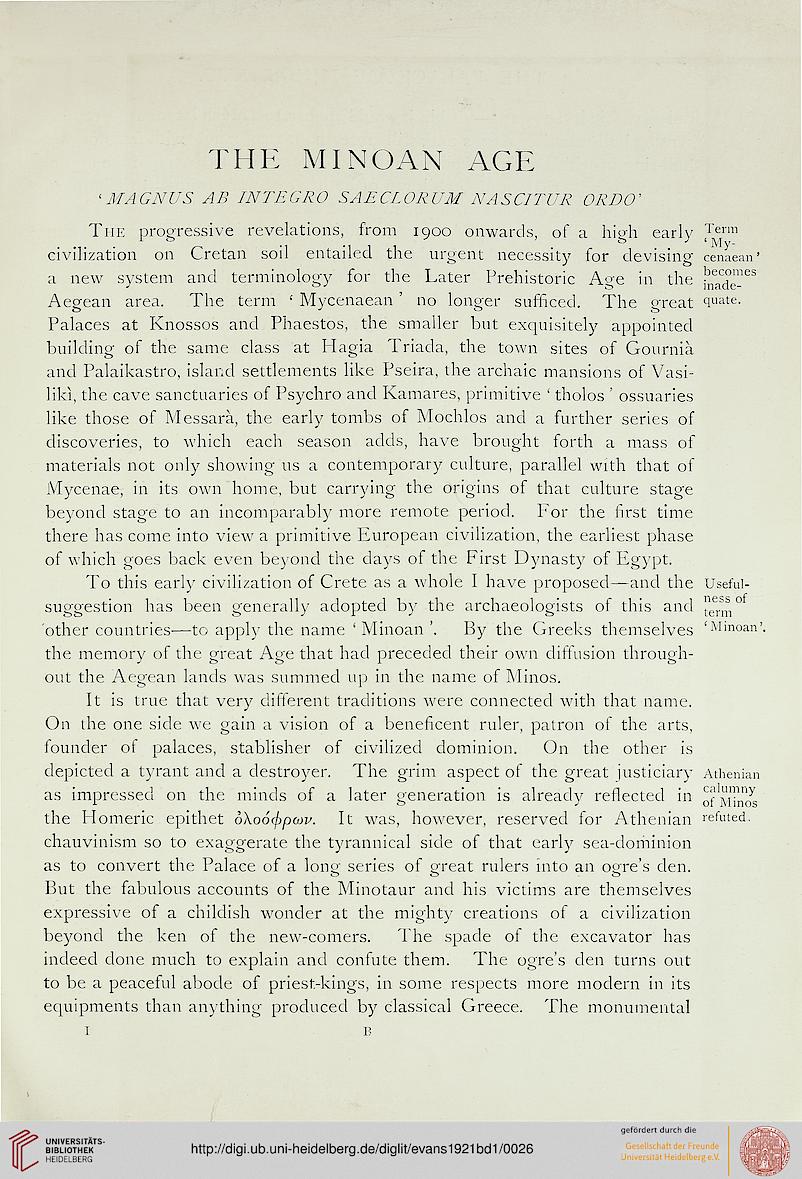 The progressive revelations, from 1900 onwards, of a high early Term
civilization on Cretan soil entailed the urgent necessity for devising cenaean'
a new system and terminology for the Later Prehistoric Age in the ^eac<}™es
Aegean area. The term ! Mycenaean' no longer sufficed. The great ciuate-
Palaces at Knossos and Phaestos, the smaller but exquisitely appointed
building of the same class at Hagia Triada, the town sites of Gournia
and Palaikastro, island settlements like Pseira, the archaic mansions of Vasi-
liki, the cave sanctuaries of Psychro and Kamares, primitive ' tholos ' ossuaries
like those of Messara, the early tombs of Mochlos and a further series of
discoveries, to which each season adds, have brought forth a mass of
materials not only showing us a contemporary culture, parallel with that of
Mycenae, in its own home, but carrying the origins of that culture stage
beyond stage to an incomparably more remote period. For the first time
there has come into view a primitive European civilization, the earliest phase
of which goes back even beyond the days of the First Dynasty of Egypt.

To this early civilization of Crete as a whole I have proposed—and the Useful-
suggestion has been generally adopted by the archaeologists of this and "eerSm°
other countries—to apply the name ' Minoan '. By the Greeks themselves 'Minoan'
the memory of the great Age that had preceded their own diffusion through-
out the Aegean lands was summed up in the name of Minos.

It is true that very different traditions were connected with that name.
On the one side we gain a vision of a beneficent ruler, patron of the arts,
founder of palaces, stablisher of civilized dominion. On the other is
depicted a tyrant and a destroyer. The grim aspect of the great justiciary Athenian
as impressed on the minds of a later generation is already reflected in ofM^os
the Homeric epithet 6\o6(f)pa>v. It was, however, reserved for Athenian refuted
chauvinism so to exaggerate the tyrannical side of that early sea-dominion
as to convert the Palace of a long series of great rulers into an ogre's den.
But the fabulous accounts of the Minotaur and his victims are themselves
expressive of a childish wonder at the mighty creations of a civilization
beyond the ken of the new-comers. The spade of the excavator has
indeed done much to explain and confute them. The ogre's den turns out
to be a peaceful abode of priest-kings, in some respects more modern in its
equipments than anything produced by classical Greece. The monumental