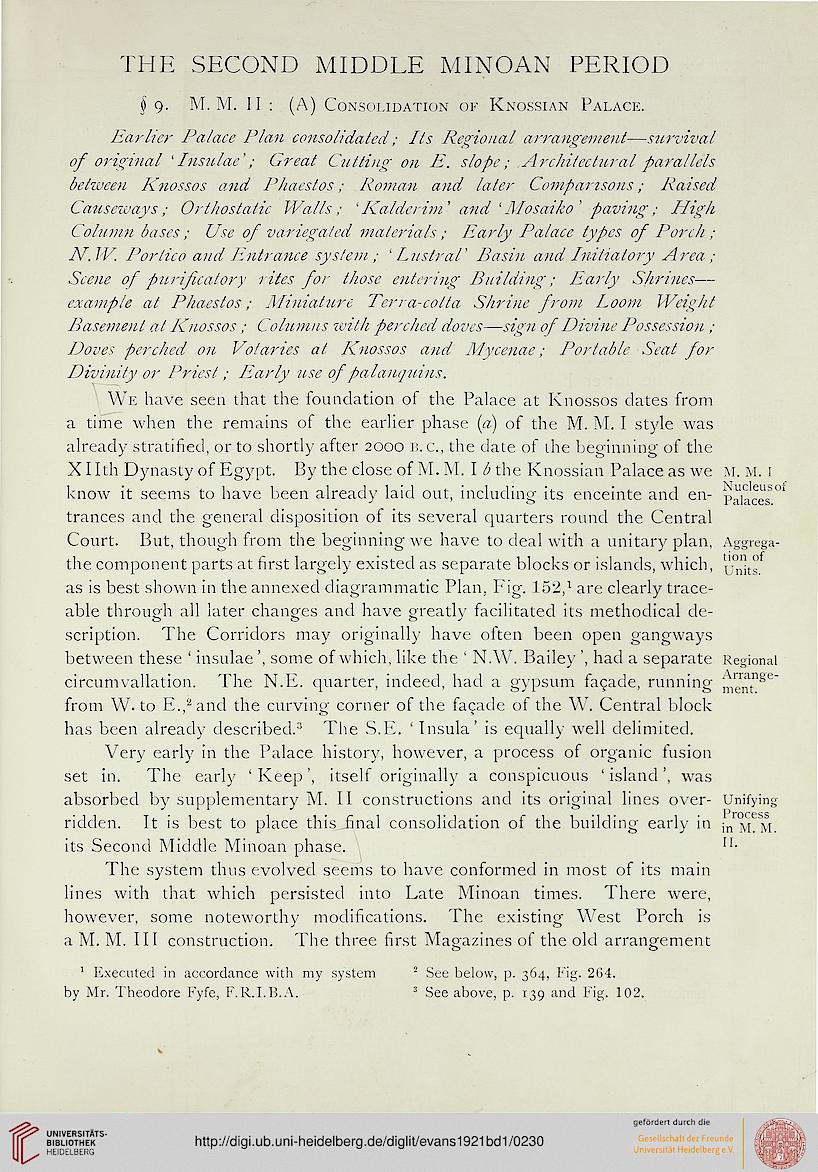 We have seen that the foundation of the Palace at Knossos dates from
a time when the remains of the earlier phase (a) of the M. M. I style was
already stratified, or to shortly after 2000 b. c, the date of the beginning" of the
XI Ith Dynasty of Egypt. By the close of M.M. I b the Knossian Palace as we m. m. 1
know it seems to have been already laid out, including- its enceinte and en- PaiacesS.°*
trances and the general disposition of its several quarters round the Central
Court. But, though from the beginning we have to deal with a unitary plan, Aggrega-
the component parts at first largely existed as separate blocks or islands, which, units
as is best shown in the annexed diagrammatic Plan, Fig. 152,1 are clearly trace-
able through all later changes and have greatly facilitated its methodical de-
scription. The Corridors may originally have often been open gangways
between these ' insulae ', some of which, like the ' N.W. Bailey ', had a separate Regional
circumvallation. The N.E. quarter, indeed, had a gypsum facade, running ^em^'
from W. to E.,2and the curving corner of the facade of the W. Central block
has been already described.3 The S.E. ' Insula' is equally well delimited.

Very early in the Palace history, however, a process of organic fusion
set in. The early ' Keep', itself originally a conspicuous ' island ', was
absorbed by supplementary M. II constructions and its original lines over- Unifying
ridden. It is best to place this final consolidation of the building early in j^m^m.
its Second Middle Minoan phase. n-

The system thus evolved seems to have conformed in most of its main
lines with that which persisted into Late Minoan times. There were,
however, some noteworthy modifications. The existing West Porch is
a M. M. Ill construction. The three first Magazines of the old arrangement