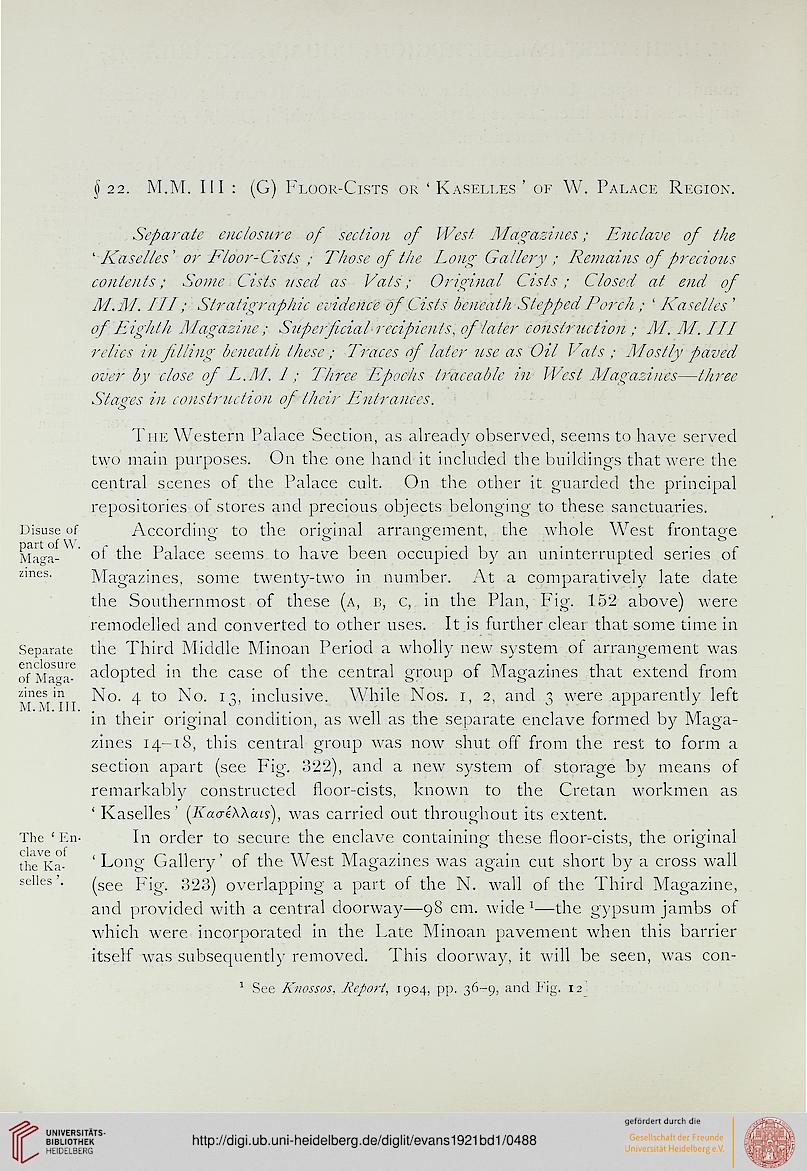 Separate enclosure of section of West. Magazines; Enclave of the
' Kaselles' or Floor-Cists ; Those of the Long Gallery ; Remains of precious
contents; Sonic Cists used as Vats; Original Cists; Closed at end of
M.M. Ill; Stratigraphic evidence of Cists beneath Stepped Porch ; ' Kaselles '
of Eighth Magazine ; Superficial recipients, of later construction ; M, M. Ill
relics in filling beneath these ; Traces nf later use as Oil Vats ; Mostly paved
over by close of L.M. 1; Three Epochs traceable in West Magazines—three
Stapes in construction of their Entrances.

The Western Palace Section, as already observed, seems to have served
two main purposes. On the one hand it included the buildings that were the
central scenes of the Palace cult. On the other it guarded the principal
repositories of stores and precious objects belonging to these sanctuaries.
Disuse of According to the original arrangement, the whole West frontage

Maga- ' °t the Palace seems to have been occupied by an uninterrupted series of
zmes. Magazines, some twenty-two in number. At a comparatively late date
the Southernmost of these (a, b, c, in the Plan, Fig. 152 above) were
remodelled and converted to other uses. It is further clear that some time in
Separate the Third Middle Minoan Period a wholly new system of arrangement was
of Maga- adopted in the case of the central group of Magazines that extend from
I^m'hi ^ tC> ^T°' inclusive. While Nos. i, 2, and 3 were apparently left

in their original condition, as well as the separate enclave formed by Maga-
zines 14-18, this central group was now shut off from the rest to form a
section apart (see Fig. 322), and a new system of storage by means of
remarkably constructed floor-cists, known to the Cretan workmen as
' Kaselles' {KaaiXXais), was carried out throughout its extent.
The 'En- In order to secure the enclave containing these floor-cists, the original
theKa- ' Long Gallery' of the West Magazines was again cut short by a cross wall
selles'. ^see pjg. 323) overlapping a part of the N. wall of the Third Magazine,
and provided with a central doorway—98 cm. wide 1—the gypsum jambs of
which were incorporated in the Late Minoan pavement when this barrier
itself was subsequently removed. This doorway, it will be seen, was con-