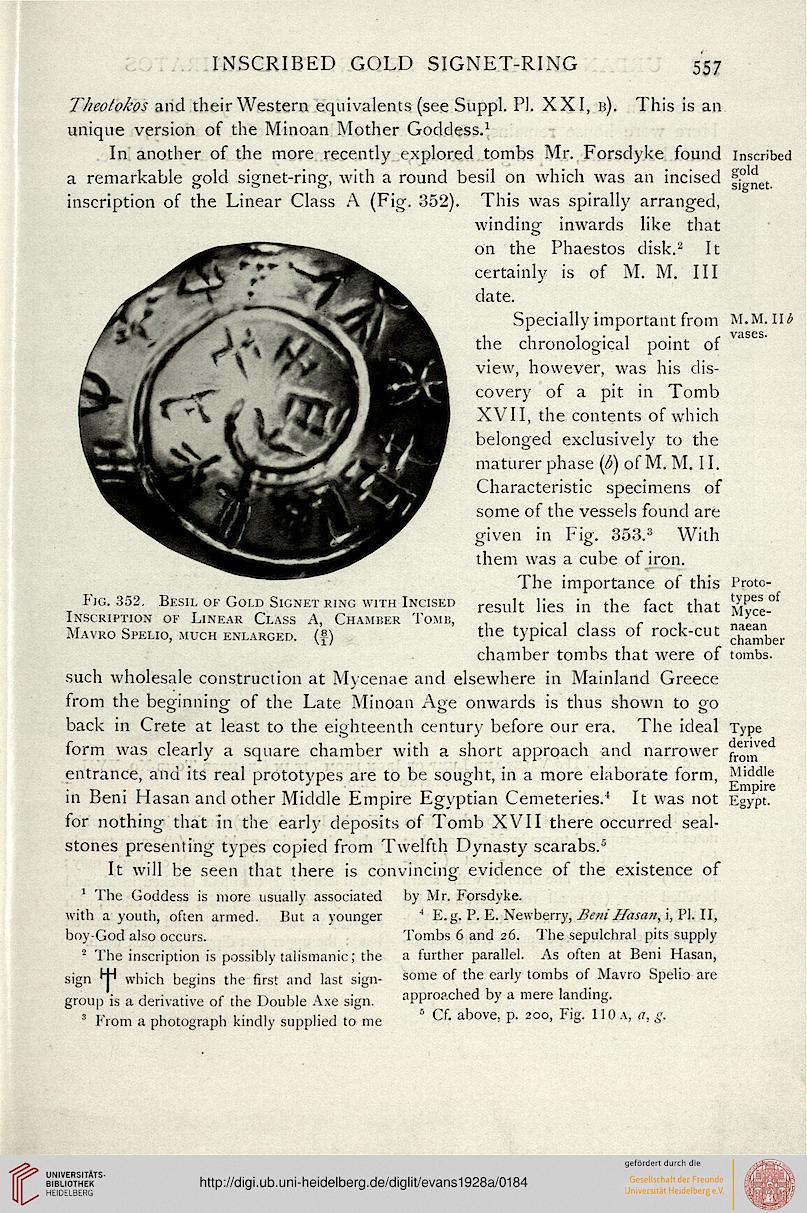 Theolokos and their Western equivalents (see Suppl. PI. XXI, u). This is an
unique version of the Minoan Mother Goddess.1

In another of the more recently explored tombs Mr. Forsdyke found
a remarkable gold signet-ring, with a round besil on which was an incised
inscription of the Linear Class A (Fig. 352). This was spirally arranged,

winding inwards like that
on the Phaestos disk.- It
certainly is of M. M. Ill
date.

Specially important from
the chronological point of
view, however, was his dis-
covery of a pit in Tomb
XVII, the contents of which
belonged exclusively to the
maturer phase (b) of M. M. II.
Characteristic specimens of
some of the vessels found are
given in Pig. 353.3 With
them was a cube of iron.

The importance of this
result lies in the fact that
the typical class of rock-cut
chamber tombs that were of
such wholesale construction at Mycenae and elsewhere in Mainland Greece
from the beginning of the Late Minoan Age onwards is thus shown to go
back in Crete at least to the eighteenth century before our era. The ideal
form was clearly a square chamber with a short approach and narrower
entrance, and its real prototypes are to be sought, in a more elaborate form,
in Beni Hasan and other Middle Empire Egyptian Cemeteries.4 It was not
for nothing that in the early deposits of Tomb XVII there occurred seal-
stones presenting types copied from Twelfth Dynasty scarabs.5

1 The Goddess is more usually associated by Mr. Forsdyke.

2 The inscription is possibly talismanic; the a further parallel. As often at Beni Hasan,
sign *f which begins the first and last sign- some of the early tombs of Mavro Spelio are
group is a derivative of the Double Axe sign.

3 From a photograph kindly supplied to me