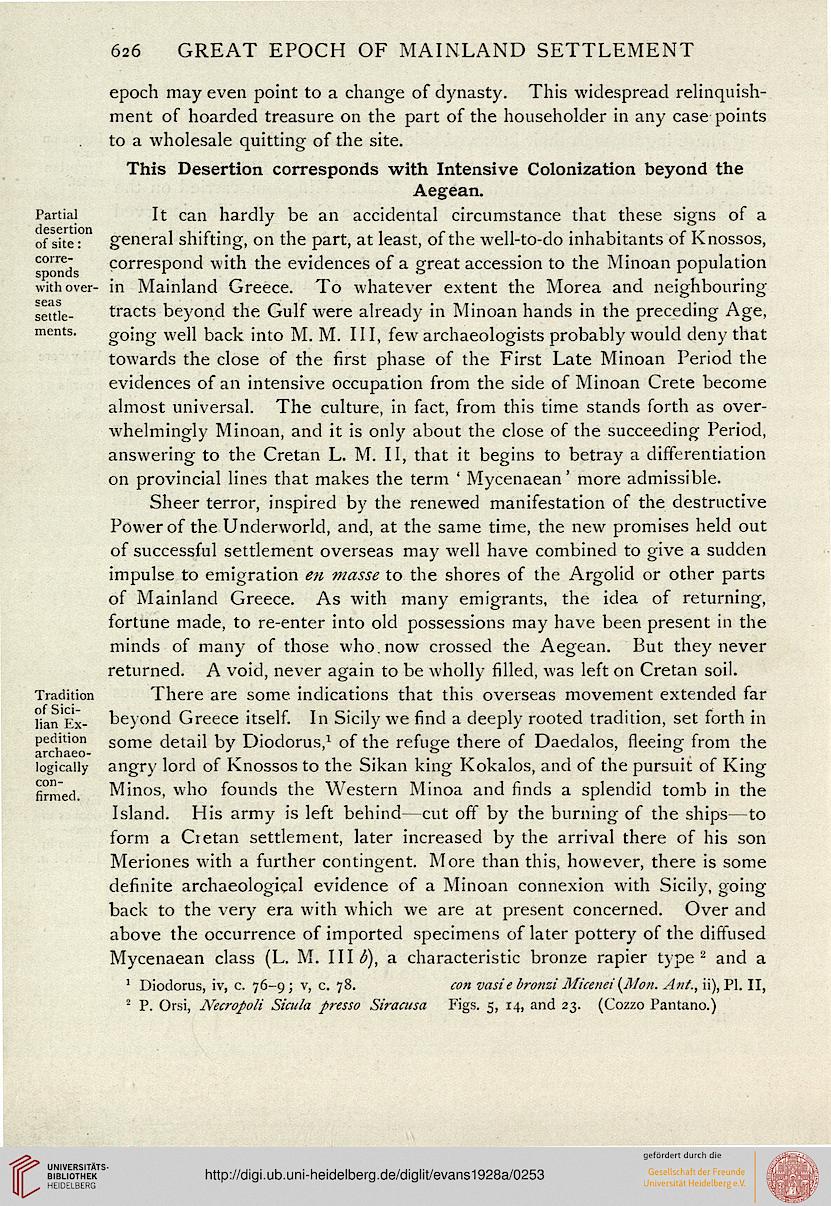 epoch may even point to a change of dynasty. This widespread relinquish-
ment of hoarded treasure on the part of the householder in any case points
to a wholesale quitting of the site.

This Desertion corresponds with Intensive Colonization beyond the

It can hardly be an accidental circumstance that these signs of a
general shifting, on the part, at least, of the well-to-do inhabitants of Knossos,
correspond with the evidences of a great accession to the Minoan population
in Mainland Greece. To whatever extent the Morea and neighbouring
tracts beyond the Gulf were already in Minoan hands in the preceding Age,
going well back into M. M. Ill, few archaeologists probably would deny that
towards the close of the first phase of the First Late Minoan Period the
evidences of an intensive occupation from the side of Minoan Crete become
almost universal. The culture, in fact, from this time stands forth as over-
whelmingly Minoan, and it is only about the close of the succeeding Period,
answering to the Cretan L. M. II, that it begins to betray a differentiation
on provincial lines that makes the term ' Mycenaean' more admissible.

Sheer terror, inspired by the renewed manifestation of the destructive
Power of the Underworld, and, at the same time, the new promises held out
of successful settlement overseas may well have combined to give a sudden
impulse to emigration en masse to the shores of the Argolid or other parts
of Mainland Greece. As with many emigrants, the idea of returning,
fortune made, to re-enter into old possessions may have been present in the
minds of many of those who. now crossed the Aegean. But they never
returned. A void, never again to be wholly filled, was left on Cretan soil.

There are some indications that this overseas movement extended far
beyond Greece itself. In Sicily we find a deeply rooted tradition, set forth in
some detail by Diodorus,1 of the refuge there of Daedalos, fleeing from the
angry lord of Knossos to the Sikan king Kokalos, and of the pursuit of King
Minos, who founds the Western Minoa and finds a splendid tomb in the
Island. His army is left behind—cut off by the burning of the ships—to
form a Cretan settlement, later increased by the arrival there of his son
Meriones with a further contingent. More than this, however, there is some
definite archaeological evidence of a Minoan connexion with Sicily, going
back to the very era with which we are at present concerned. Over and
above the occurrence of imported specimens of later pottery of the diffused
Mycenaean class (L. M. \\\B), a characteristic bronze rapier type2 and a