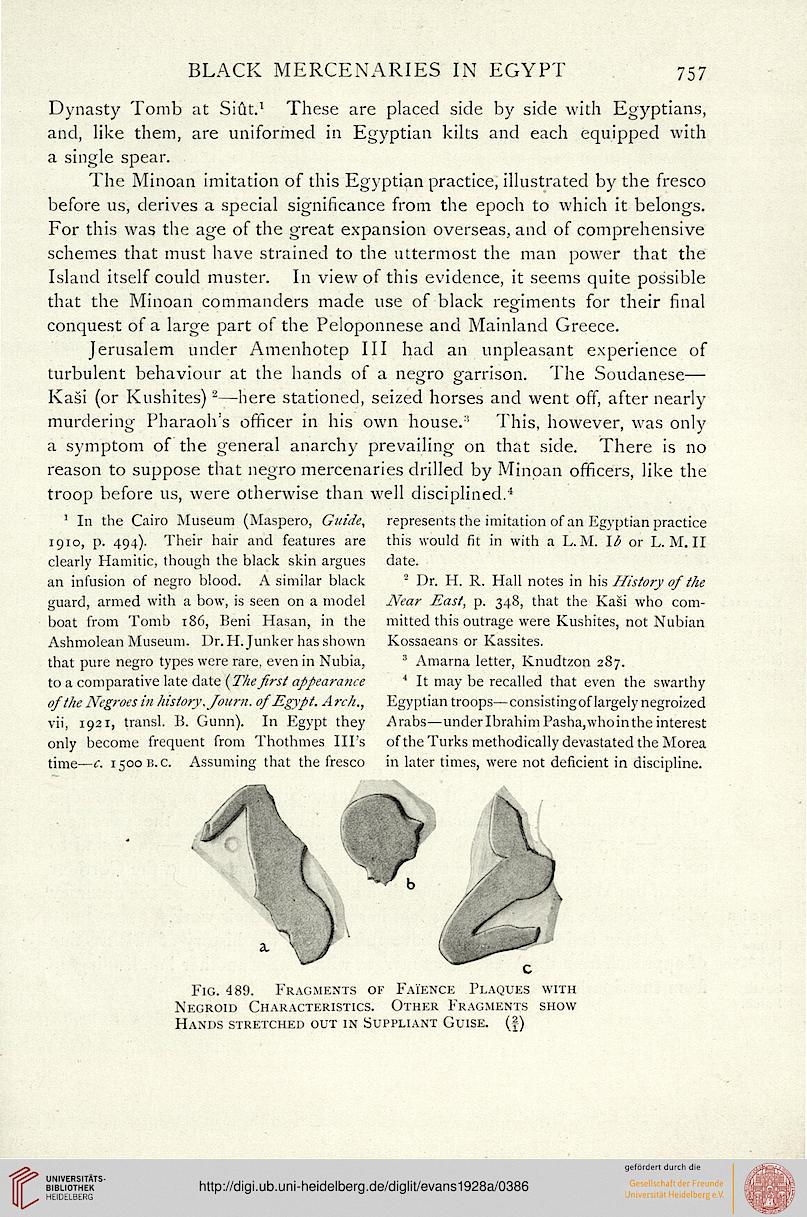 Dynasty Tomb at Siut.1 These are placed side by side with Egyptians,
and, like them, are uniformed in Egyptian kilts and each equipped with
a single spear.

The Minoan imitation of this Egyptian practice, illustrated by the fresco
before us, derives a special significance from the epoch to which it belongs.
For this was the age of the great expansion overseas, and of comprehensive
schemes that must have strained to the uttermost the man power that the
Island itself could muster. In view of this evidence, it seems quite possible
that the Minoan commanders made use of black regiments for their final
conquest of a large part of the Peloponnese and Mainland Greece.

Jerusalem under Amenhotep III had an unpleasant experience of
turbulent behaviour at the hands of a negro garrison. The Soudanese—
Kasi (or Kushites)2—here stationed, seized horses and went off, after nearly
murdering Pharaoh's officer in his own house.11 This, however, was only
a symptom of the general anarchy prevailing on that side. There is no
reason to suppose that negro mercenaries drilled by Minoan officers, like the
troop before us, were otherwise than well disciplined.4

1 In the Cairo Museum (Maspero, Guide, represents the imitation of an Egyptian practice

an infusion of negro blood. A similar black 2 Dr. H. R. Hall notes in his History of the
guard, armed with a bow, is seen on a model Near East, p. 348, that the Kasi who corn-
boat from Tomb 186, Beni Hasan, in the mitted this outrage were Kushites, not Nubian
Ashmolean Museum. Dr. H. Junker has shown Kossaeans or Kassites.
that pure negro types were rare, even in Nubia, 3 Amarna letter, Knudtzon 287.
to a comparative late date (Thefirst appearance 4 It may be recalled that even the swarthy
of the Negroes in history, Journ. of Egypt. Arch., Egyptian troops—consistingof largely negroized
vii, 1921, transl. 15. Gunn). In Egypt they Arabs—under Ibrahim Pasha, whoin the interest
only become frequent from Thothmes Ill's of the Turks methodically devastated the Morea
time—c. 1500 B.C. Assuming that the fresco in later times, were not deficient in discipline.