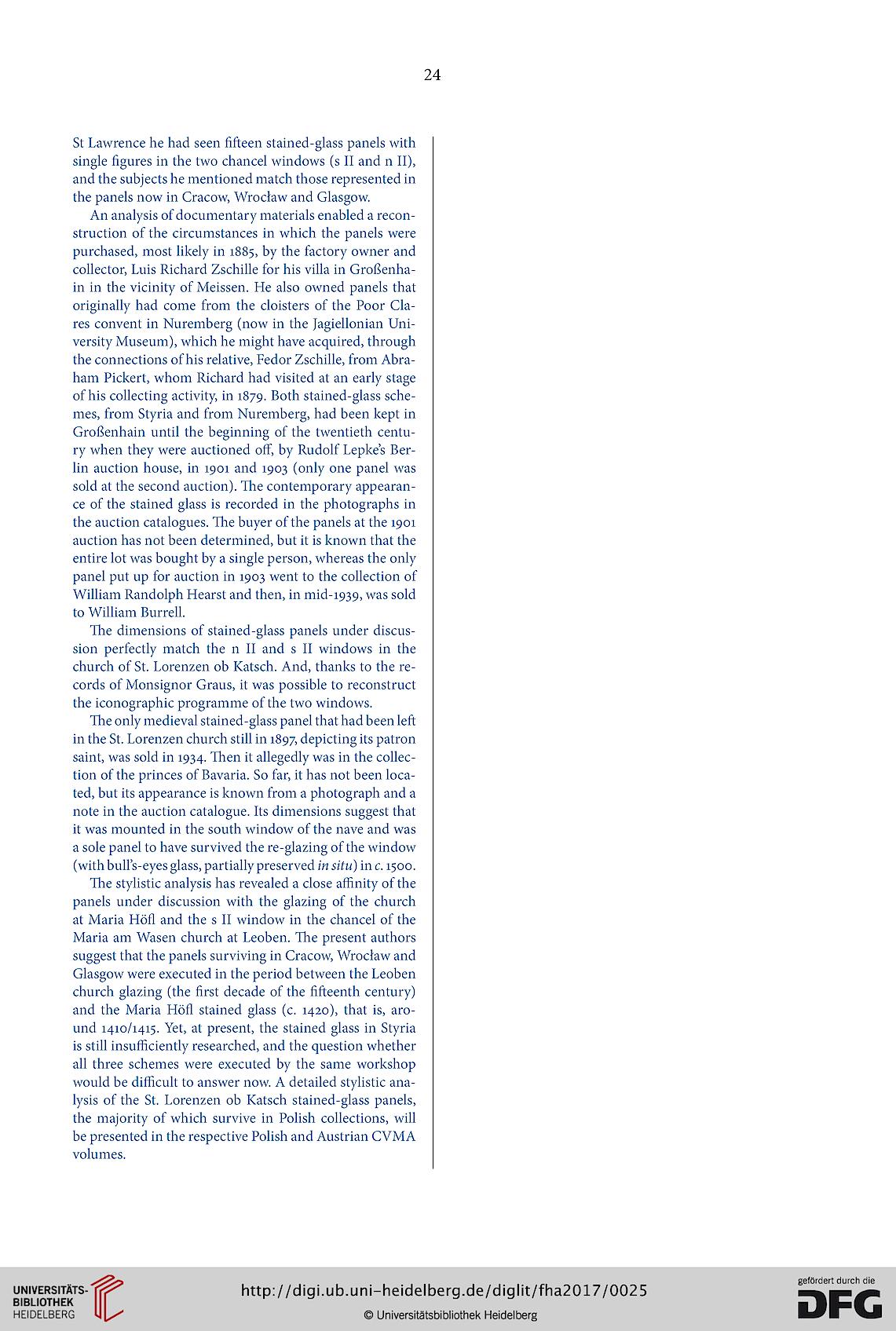 St Lawrence he had seen fifteen stained-glass panels with
single figures in the two chancel windows (s II and n II),
and the subjects he mentioned match those represented in
the panels now in Cracow, Wroclaw and Glasgow.
An analysis of documentary materials enabled a recon-
struction of the circumstances in which the panels were
purchased, most likely in 1885, by the factory owner and
collector, Luis Richard Zschille for his villa in Großenha-
in in the vicinity of Meissen. He also owned panels that
originally had come from the cloisters of the Poor Cla-
res convent in Nuremberg (now in the Jagiellonian Uni-
versity Museum), which he might have acquired, through
the connections of his relative, Fedor Zschille, from Abra-
ham Piekert, whom Richard had visited at an early stage
of his collecting activity, in 1879. Both stained-glass sche-
mes, from Styria and from Nuremberg, had been kept in
Großenhain until the beginning of the twentieth centu-
ry when they were auctioned off, by Rudolf Lepkes Ber-
lin auction house, in 1901 and 1903 (only one panel was
sold at the second auction). The contemporary appearan-
ce of the stained glass is recorded in the photographs in
the auction catalogues. The buyer of the panels at the 1901
auction has not been determined, but it is known that the
entire lot was bought by a single person, whereas the only
panel put up for auction in 1903 went to the collection of
William Randolph Hearst and then, in mid-1939, was sold
to William Burrell.
The dimensions of stained-glass panels under discus-
sion perfectly match the n II and s II windows in the
church of St. Lorenzen ob Katsch. And, thanks to the re-
cords of Monsignor Graus, it was possible to reconstruct
the iconographie programme of the two windows.
The only medieval stained-glass panel that had been left
in the St. Lorenzen church still in 1897, depicting its patron
saint, was sold in 1934. Then it allegedly was in the collec-
tion of the princes of Bavaria. So far, it has not been loca-
ted, but its appearance is known from a photograph and a
note in the auction catalogue. Its dimensions suggest that
it was mounted in the south window of the nave and was
a sole panel to have survived the re-glazing of the window
(with bull’s-eyes glass, partially preserved in situ) in c. 1500.
The stylistic analysis has revealed a close affinity of the
panels under discussion with the glazing of the church
at Maria Höfl and the s II window in the chancel of the
Maria am Wasen church at Leoben. The present authors
suggest that the panels surviving in Cracow, Wroclaw and
Glasgow were executed in the period between the Leoben
church glazing (the first decade of the fifteenth century)
and the Maria Höfl stained glass (c. 1420), that is, aro-
und 1410/1415. Yet, at present, the stained glass in Styria
is still insufficiently researched, and the question whether
all three schemes were executed by the same workshop
would be difficult to answer now. A detailed stylistic ana-
lysis of the St. Lorenzen ob Katsch stained-glass panels,
the majority of which survive in Polish collections, will
be presented in the respective Polish and Austrian CVMA
volumes.