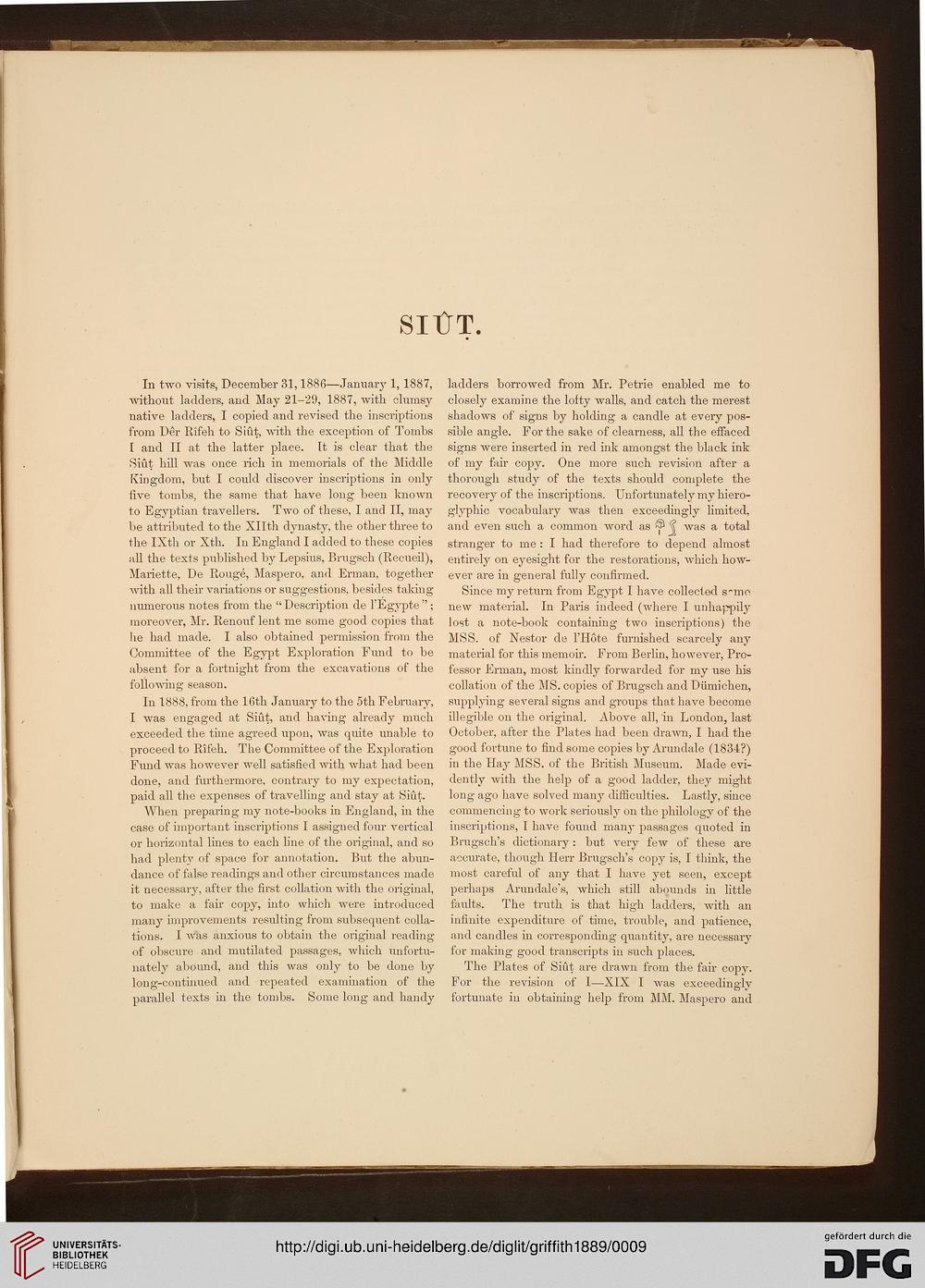 1 In two visits, December 31,1886—January 1, 1887,
•without ladders, and May 21-29, 1887, with clumsy
native ladders, I copied and revised the inscriptions
from Der Rifeh to Siut, with the exception of Tombs
I and II at the latter place. It is clear that the
Siut hill was once rich in memorials of the Middle
Kingdom, but I could discover inscriptions in only
five tombs, the same that have long been known
to Egyptian travellers. Two of these, I and II, may
be attributed to the Xllth dynasty, the other three to
the IXth or Xth. In England I added to these copies
all the texts published by Lepsius, Brugsch (Recueil),
Mariette, De Rouge, Maspero, and Erman, together
with all their variations or suggestions, besides taking
numerous notes from the " Description de l'Egypte " ;
moreover, Mr. Renouf lent me some good copies that
he had made. I also obtained permission from the
Committee of the Egypt Exploration Fund to be
absent for a fortnight from the excavations of the
following season.

In 1888, from the 16th January to the 5th February,
I was engaged at Siut, and having already much
exceeded the time agreed upon, was quite unable to
proceed to Rifeh. The Committee of the Exploration
Fund was however well satisfied with what had been
done, and furthermore, contrary to my expectation,
paid all the expenses of travelling and stay at Siut.

When preparing my note-books in England, in the
case of important inscriptions I assigned four vertical
or horizontal lines to each line of the original, and so
had plenty of space for annotation. But the abun-
dance of false readings and other circumstances made
it necessary, after the first collation with the original,
to make a fair copy, into which were introduced
many improvements resulting from subsequent colla-
tions. I was anxious to obtain the original reading
of obscure and mutilated passages, which unfortu-
nately abound, and this was only to be done by
long-continued and repeated examination of the
parallel texts in the tombs. Some long and handy

ladders borrowed from Mr. Petrie enabled me to
closely examine the lofty walls, and catch the merest
shadows of signs by holding a candle at every pos-
sible angle. For the sake of clearness, all the effaced
signs were inserted in red ink amongst the black ink
of my fair copy. One more such revision after a
thorough study of the texts should complete the
recovery of the inscriptions. Unfortunately my hiero-
glyphic vocabulary was then exceedingly limited,
and even such a common word as ® € was a total
stranger to me : I had therefore to depend almost
entirely on eyesight for the restorations, which how-
ever are in general fully confirmed.

Since my return from Egypt I have collected s~mo
new material. In Paris indeed (where I unhappily
lost a note-book containing two inscriptions) the
MSS. of Nestor de l'Hote furnished scarcely any
material for this memoir. From Berlin, however, Pro-
fessor Erman, most kindly forwarded for my use his
collation of the MS. copies of Brugsch and Dumichen,
supplying several signs and groups that have become
illegible on the original. Above all, in London, last
October, after the Plates had been drawn, I had the
good fortune to find some copies by Arundale (1834?)
in the Hay MSS. of the British Museum. Made evi-
dently with the help of a good ladder, they might
long ago have solved many difficulties. Lastly, since
commencing to work seriously on the philology of the
inscriptions, I have found many passages quoted in
Brugsch's dictionary: but very few of these are
accurate, though Herr Brugsch's copy is, I think, the
most careful of any that I have yet seen, except
perhaps Arundale's, which still abounds in little
faults. The truth is that high ladders, with an
infinite expenditure of time, trouble, and patience,
and candles in corresponding quantity, are necessary
for making good transcripts in such places.

The Plates of Siut are drawn from the fair copy.
For the revision of I—XIX I was exceedingly
fortunate in obtaining help from MM. Maspero and