Hamilton, William [Editor]; Tischbein, Johann Heinrich Wilhelm [Editor]
Collection Of Engravings From Ancient Vases Of Greek Workmanship: Discoverd In Sepulchres In The Kingdom Of The Two Sicilies But Chiefly In The Neighbourhood Of Naples During The Course Of The Years MDCCLXXXIX and MDCCLXXXX Now In The Possession Of Sir Wm. Hamilton, His Britannic Maiesty's Envoy Extry. And Plenipotentiary At The Court Of Naples (Band 1) — Neapel, 1791 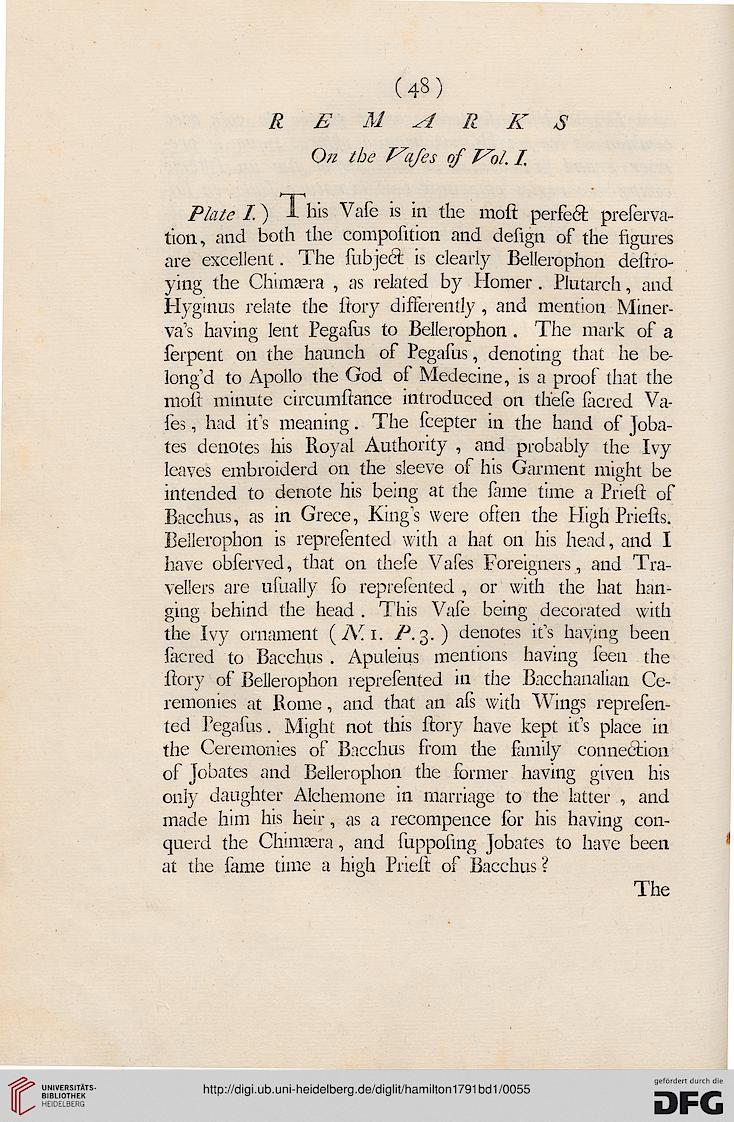 Information about OCR text
(43)
R E M M R K S
On the F^afes of Pol. /
Plate I. ) A his Vase is in the moll perfe6£ prefer va-
tion, and both the composition and design of the figures
are excellent. The subjeft is clearly Bellerophon destro-
ying the Chimsera , as related by Homer . Plutarch, and
Hyginus relate the story difserently , and mention Miner-
va's having lent Pegasus to Bellerophon, The mark of a
serpent on the haunch of Pegasus, denoting that he be-
longed to Apollo the God of Medecine, is a proof that the
molt minute circumstance introduced on th'ese sacred Va-
ses, had it's meaning. The scepter in the hand of Joba-
tes denotes his Royal Authority , and probably the Ivy
leaves embroiderd on the sleeve of his Garment might be
intended to denote his being at the same time a Priest of
Bacchus, as in Grece, King's were often the High Priests.
Bellerophon is represented with a hat on his head, and I
have observed, that on these Vases Foreigners, and Tra-
vellers are usually so represented , or with the hat han-
ging behind the head . This Vase being decorated with
the Ivy ornament (iVi. P. 3.) denotes it's haying been
sacred to Bacchus . Apuleius mentions having seen the
story of Bellerophon represented in the Bacchanalian Ce-
remonies at Rome, and that an ass with Wings represen-
ted Pegasus. Might not this story have kept it's place in
the Ceremonies of Bacchus from the family connexion
of Jobates and Bellerophon the former having given his
only daughter Alchemone in marriage to the latter , and
made him his heir, as a recompence sor his having con-
querd the Chimera, and supposing Jobates to have been
at the same time a high Priest of Bacchus?
The