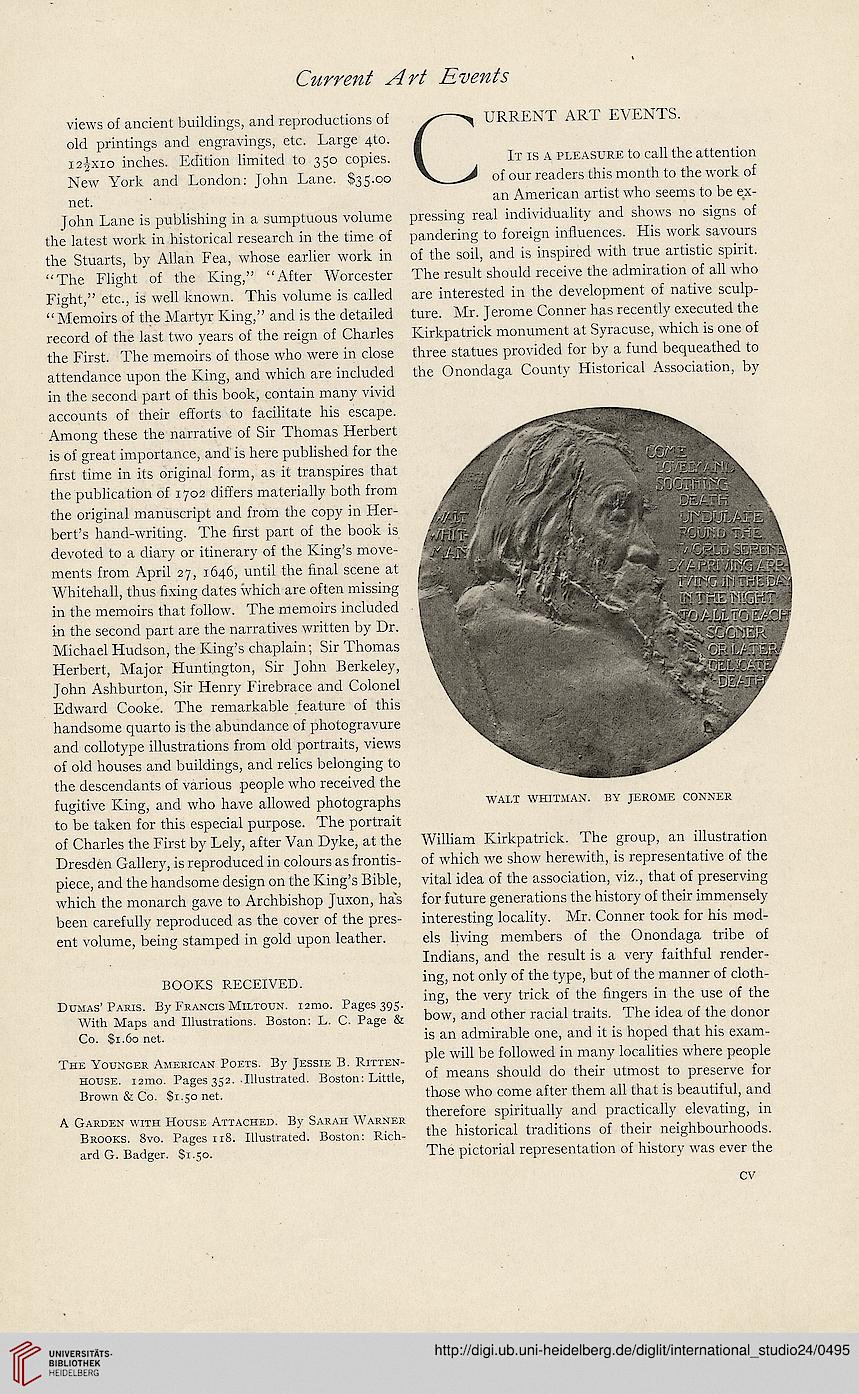 views of ancient buildings, and reproductions of
old printings and engravings, etc. Large 4to.
12JX10 inches. Edition limited to 350 copies.
New York and London: John Lane. $35.00
net.
John Lane is publishing in a sumptuous volume
the latest work in historical research in the time of
the Stuarts, by Allan Fea, whose earlier work in
“The Flight of the King,” “After Worcester
Fight,” etc., is well known. This volume is called
“Memoirs of the Martyr King,” and is the detailed
record of the last two years of the reign of Charles
the First. The memoirs of those who were in close
attendance upon the King, and which are included
in the second part of this book, contain many vivid
accounts of their efforts to facilitate his escape.
Among these the narrative of Sir Thomas Herbert
is of great importance, and is here published for the
first time in its original form, as it transpires that
the publication of 1702 differs materially both from
the original manuscript and from the copy in Her-
bert’s hand-writing. The first part of the book is
devoted to a diary or itinerary of the King’s move-
ments from April 27, 1646, until the final scene at
Whitehall, thus fixing dates which are often missing
in the memoirs that follow. The memoirs included
in the second part are the narratives written by Dr.
Michael Hudson, the King’s chaplain; Sir Thomas
Herbert, Major Huntington, Sir John Berkeley,
John Ashburton, Sir Henry Firebrace and Colonel
Edward Cooke. The remarkable feature of this
handsome quarto is the abundance of photogravure
and collotype illustrations from old portraits, views
of old houses and buildings, and relics belonging to
the descendants of various people who received the
fugitive King, and who have allowed photographs
to be taken for this especial purpose. The portrait
of Charles the First by Lely, after Van Dyke, at the
Dresden Gallery, is reproduced in colours as frontis-
piece, and the handsome design on the King’s Bible,
which the monarch gave to Archbishop Juxon, has
been carefully reproduced as the cover of the pres-
ent volume, being stamped in gold upon leather.


URRENT ART EVENTS.
It is a pleasure to call the attention
of our readers this month to the work of
an American artist who seems to be ex-

pressing real individuality and shows no signs of
pandering to foreign influences. His work savours
of the soil, and is inspired with true artistic spirit.
The result should receive the admiration of all who
are interested in the development of native sculp-
ture. Mr. Jerome Conner has recently executed the
Kirkpatrick monument at Syracuse, which is one of
three statues provided for by a fund bequeathed to
the Onondaga County Historical Association, by

William Kirkpatrick. The group, an illustration
of which we show herewith, is representative of the
vital idea of the association, viz., that of preserving
for future generations the history of their immensely
interesting locality. Mr. Conner took for his mod-
els living members of the Onondaga tribe of
Indians, and the result is a very faithful render-
ing, not only of the type, but of the manner of cloth-
ing, the very trick of the fingers in the use of the
bow, and other racial traits. The idea of the donor
is an admirable one, and it is hoped that his exam-
ple will be followed in many localities where people
of means should do their utmost to preserve for
those who come after them all that is beautiful, and
therefore spiritually and practically elevating, in
the historical traditions of their neighbourhoods.
The pictorial representation of history was ever the