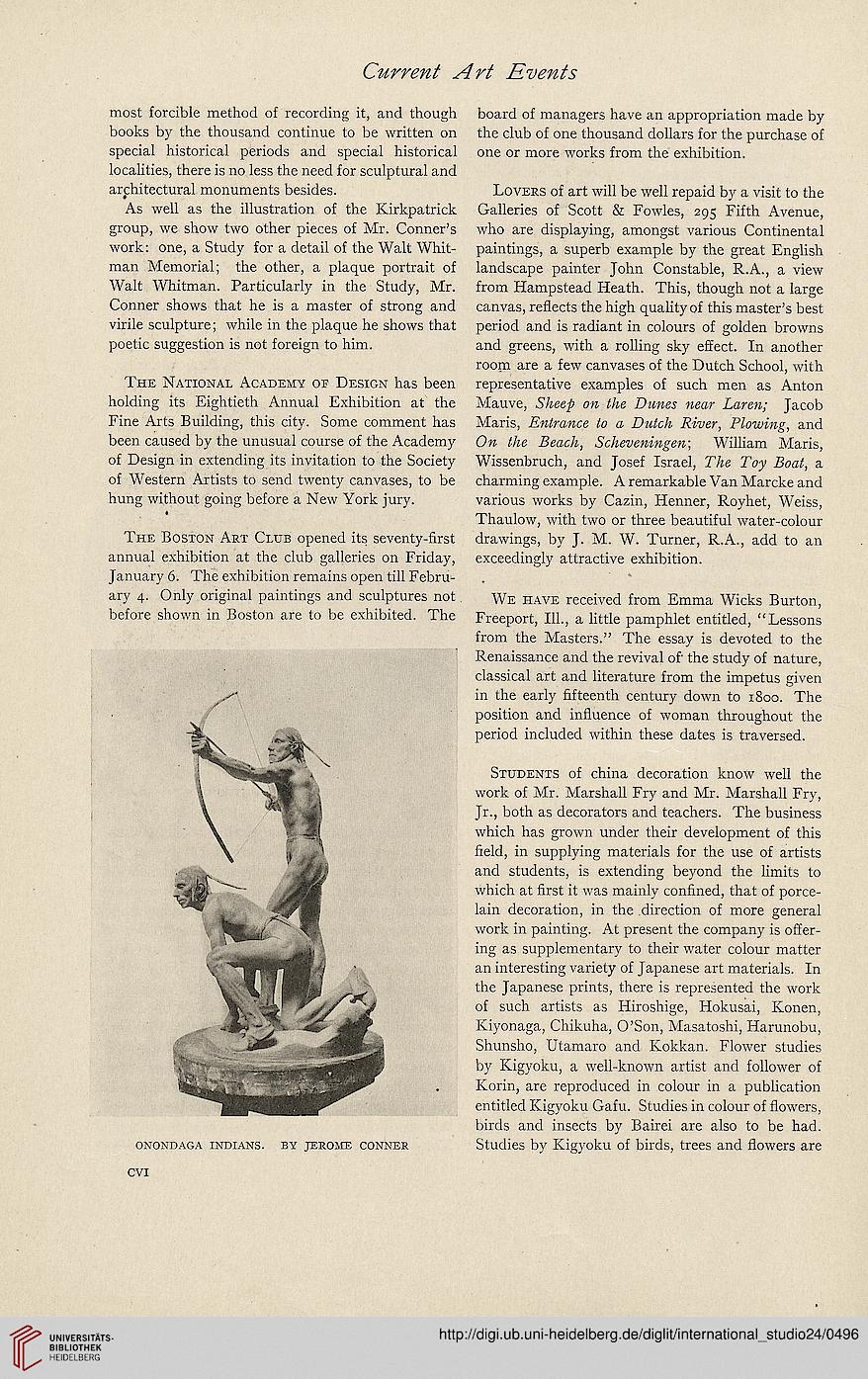 most forcible method of recording it, and though
books by the thousand continue to be written on
special historical periods and special historical
localities, there is no less the need for sculptural and
architectural monuments besides.
*
As well as the illustration of the Kirkpatrick
group, we show two other pieces of Mr. Conner’s
work: one, a Study for a detail of the Walt Whit-
man Memorial; the other, a plaque portrait of
Walt Whitman. Particularly in the Study, Mr.
Conner shows that he is a master of strong and
virile sculpture; while in the plaque he shows that
poetic suggestion is not foreign to him.
The National Academy of Design has been
holding its Eightieth Annual Exhibition at the
Fine Arts Building, this city. Some comment has
been caused by the unusual course of the Academy
of Design in extending its invitation to the Society
of Western Artists to send twenty canvases, to be
hung without going before a New York jury.
The Boston Art Club opened its seventy-first
annual exhibition at the club galleries on Friday,
January 6. The exhibition remains open till Febru-
ary 4. Only original paintings and sculptures not
before shown in Boston are to be exhibited. The

board of managers have an appropriation made by
the club of one thousand dollars for the purchase of
one or more works from the exhibition.
Lovers of art will be well repaid by a visit to the
Galleries of Scott & Fowles, 295 Fifth Avenue,
who are displaying, amongst various Continental
paintings, a superb example by the great English
landscape painter John Constable, R.A., a view
from Hampstead Heath. This, though not a large
canvas, reflects the high quality of this master’s best
period and is radiant in colours of golden browns
and greens, with a rolling sky effect. In another
room are a few canvases of the Dutch School, with
representative examples of such men as Anton
Mauve, Sheep on the Dunes near Laren; Jacob
Maris, Entrance to a Dutch River, Plowing, and
On the Beach, Scheveningeiv, William Maris,
Wissenbruch, and Josef Israel, The Toy Boat, a
charming example. A remarkable Van Marcke and
various works by Cazin, Henner, Royhet, Weiss,
Thaulow, with two or three beautiful water-colour
drawings, by J. M. W. Turner, R.A., add to an
exceedingly attractive exhibition.
We have received from Emma Wicks Burton,
Freeport, Ill., a little pamphlet entitled, “Lessons
from the Masters.” The essay is devoted to the
Renaissance and the revival of' the study of nature,
classical art and literature from the impetus given
in the early fifteenth century down to 1800. The
position and influence of woman throughout the
period included within these dates is traversed.
Students of china decoration know well the
work of Mr. Marshall Fry and Mr. Marshall Fry,
Jr., both as decorators and teachers. The business
which has grown under their development of this
field, in supplying materials for the use of artists
and students, is extending beyond the limits to
which at first it was mainly confined, that of porce-
lain decoration, in the direction of more general
work in painting. At present the company is offer-
ing as supplementary to their water colour matter
an interesting variety of Japanese art materials. In
the Japanese prints, there is represented the work
of such artists as Hiroshige, Hokusai, Konen,
Kiyonaga, Chikuha, O’Son, Masatoshi, Harunobu,
Shunsho, Utamaro and Kokkan. Flower studies
by Kigyoku, a well-known artist and follower of
Korin, are reproduced in colour in a publication
entitled Kigyoku Gafu. Studies in colour of flowers,
birds and insects by Bairei are also to be had.
Studies by Kigyoku of birds, trees and flowers are