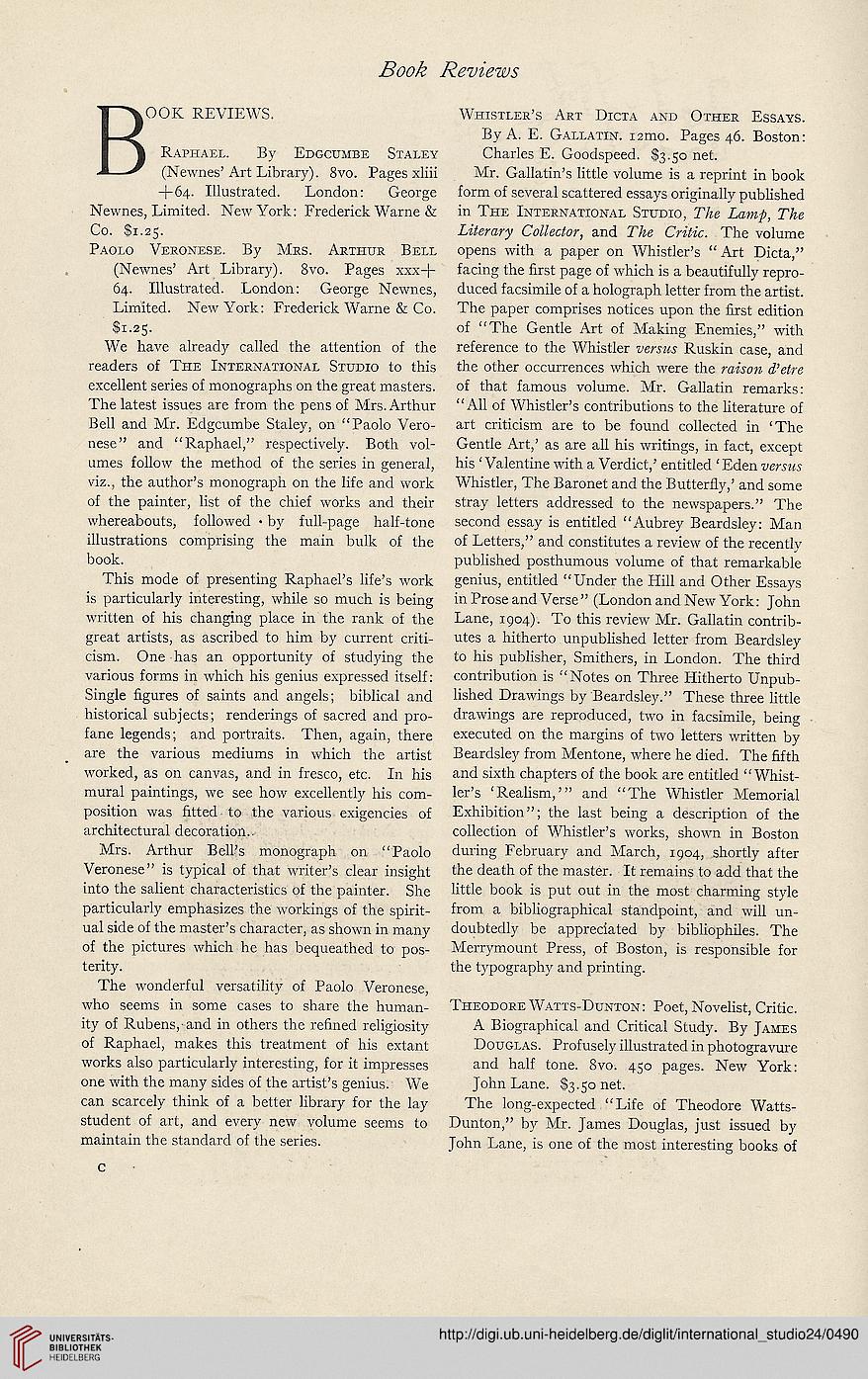 $1.25.
We have already called the attention of the
readers of The International Studio to this
excellent series of monographs on the great masters.
The latest issues are from the pens of Mrs. Arthur
Bell and Mr. Edgcumbe Staley, on “Paolo Vero-
nese” and “Raphael,” respectively. Both vol-
umes follow the method of the series in general,
viz., the author’s monograph on the life and work
of the painter, list of the chief works and their
whereabouts, followed • by full-page half-tone
illustrations comprising the main bulk of the
book.
This mode of presenting Raphael’s life’s work
is particularly interesting, while so much is being
written of his changing place in the rank of the
great artists, as ascribed to him by current criti-
cism. One has an opportunity of studying the
various forms in which his genius expressed itself:
Single figures of saints and angels; biblical and
historical subjects; renderings of sacred and pro-
fane legends; and portraits. Then, again, there
are the various mediums in which the artist
worked, as on canvas, and in fresco, etc. In his
mural paintings, we see how excellently his com-
position was fitted to the various exigencies of
architectural decoration.
Mrs. Arthur Bell’s monograph on “Paolo
Veronese” is typical of that writer’s clear insight
into the salient characteristics of the painter. She
particularly emphasizes the workings of the spirit-
ual side of the master’s character, as shown in many
of the pictures which he has bequeathed to pos-
terity.
The wonderful versatility of Paolo Veronese,
who seems in some cases to share the human-
ity of Rubens, and in others the refined religiosity
of Raphael, makes this treatment of his extant
works also particularly interesting, for it impresses
one with the many sides of the artist’s genius. We
can scarcely think of a better library for the lay
student of art, and every new volume seems to
maintain the standard of the series.

Whistler’s Art Dicta and Other Essays.
By A. E. Gallatin. i2mo. Pages 46. Boston:
Charles E. Goodspeed. $3.50 net.
Mr. Gallatin’s little volume is a reprint in book
form of several scattered essays originally published
in The International Studio, The Lamp, The
Literary Collector, and The Critic. The volume
opens with a paper on Whistler’s “ Art Dicta,”
facing the first page of which is a beautifully repro-
duced facsimile of a holograph letter from the artist.
The paper comprises notices upon the first edition
of “The Gentle Art of Making Enemies,” with
reference to the Whistler versus Ruskin case, and
the other occurrences which were the raison d’etre
of that famous volume. Mr. Gallatin remarks:
“All of Whistler’s contributions to the literature of
art criticism are to be found collected in ‘The
Gentle Art,’ as are all his writings, in fact, except
his ‘Valentine with a Verdict,’ entitled ‘Eden versus
Whistler, The Baronet and the Butterfly,’ and some
stray letters addressed to the newspapers.” The
second essay is entitled “Aubrey Beardsley: Man
of Letters,” and constitutes a review of the recently
published posthumous volume of that remarkable
genius, entitled “Under the Hill and Other Essays
in Prose and Verse” (London and New York: John
Lane, 1904). To this review Mr. Gallatin contrib-
utes a hitherto unpublished letter from Beardsley
to his publisher, Smithers, in London. The third
contribution is “Notes on Three Hitherto Unpub-
lished Drawings by Beardsley.” These three little
drawings are reproduced, two in facsimile, being
executed on the margins of two letters written by
Beardsley from Mentone, where he died. The fifth
and sixth chapters of the book are entitled “Whist-
ler’s ‘Realism,’” and “The Whistler Memorial
Exhibition”; the last being a description of the
collection of Whistler’s works, shown in Boston
during February and March, 1904, shortly after
the death of the master. It remains to add that the
little book is put out in the most charming style
from a bibliographical standpoint, and will un-
doubtedly be appreciated by bibliophiles. The
Merrymount Press, of Boston, is responsible for
the typography and printing.
Theodore Watts-Dunton : Poet, Novelist, Critic.
A Biographical and Critical Study. By James
Douglas. Profusely illustrated in photogravure
and half tone. 8vo. 450 pages. New York:
John Lane. $3.50 net.
The long-expected “Life of Theodore Watts-
Dunton,” by Mr. James Douglas, just issued by
John Lane, is one of the most interesting books of