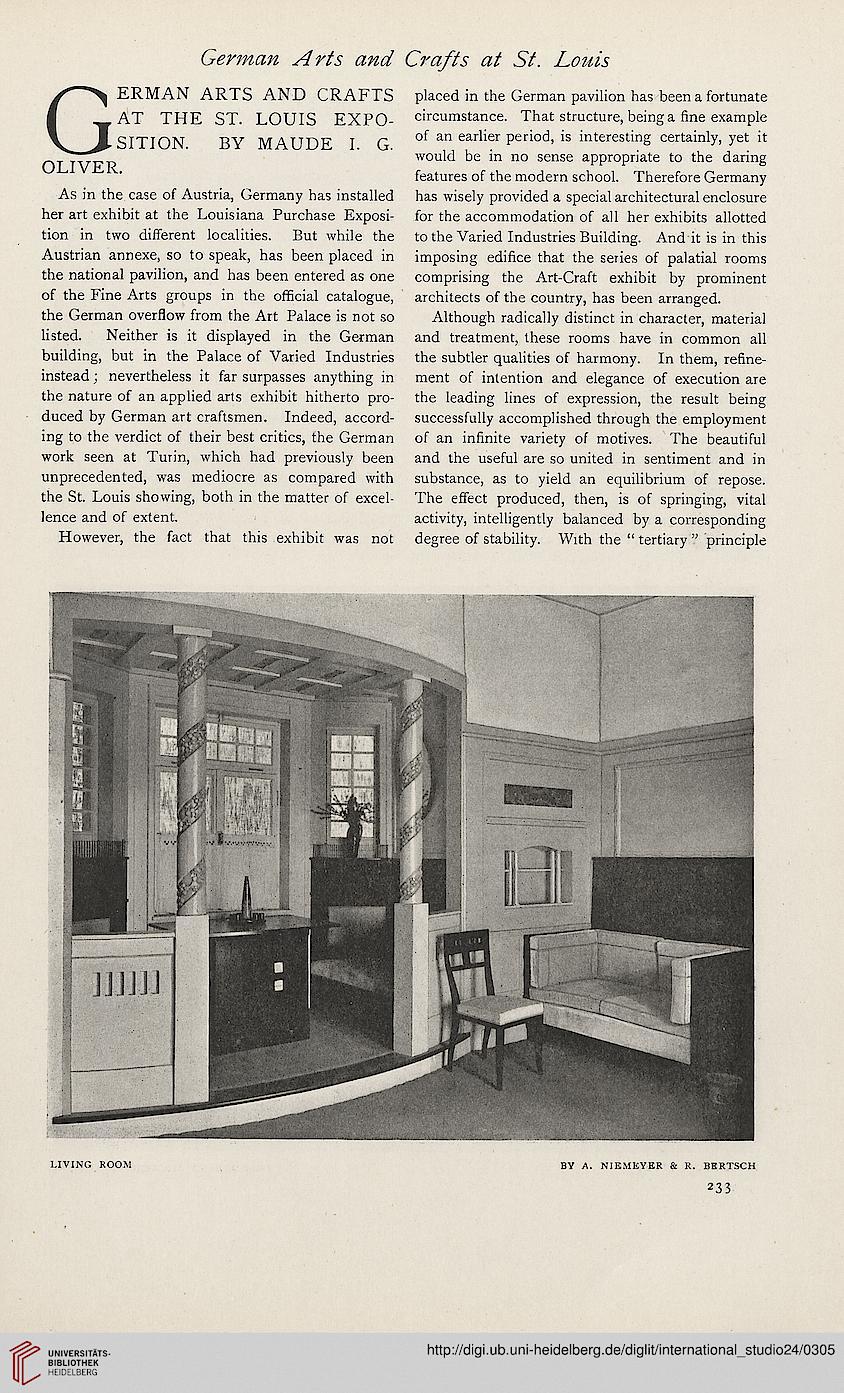 German arts and crafts
AT THE ST. LOUIS EXPO-
SITION. BY MAUDE I. G.
OLIVER.
As in the case of Austria, Germany has installed
her art exhibit at the Louisiana Purchase Exposi-
tion in two different localities. But while the
Austrian annexe, so to speak, has been placed in
the national pavilion, and has been entered as one
of the Fine Arts groups in the official catalogue,
the German overflow from the Art Palace is not so
listed. Neither is it displayed in the German
building, but in the Palace of Varied Industries
instead; nevertheless it far surpasses anything in
the nature of an applied arts exhibit hitherto pro-
duced by German art craftsmen. Indeed, accord-
ing to the verdict of their best critics, the German
work seen at Turin, which had previously been
unprecedented, was mediocre as compared with
the St. Louis showing, both in the matter of excel-
lence and of extent.
However, the fact that this exhibit was not

placed in the German pavilion has been a fortunate
circumstance. That structure, being a fine example
of an earlier period, is interesting certainly, yet it
would be in no sense appropriate to the daring
features of the modern school. Therefore Germany
has wisely provided a special architectural enclosure
for the accommodation of all her exhibits allotted
to the Varied Industries Building. And it is in this
imposing edifice that the series of palatial rooms
comprising the Art-Craft exhibit by prominent
architects of the country, has been arranged.
Although radically distinct in character, material
and treatment, these rooms have in common all
the subtler qualities of harmony. In them, refine-
ment of intention and elegance of execution are
the leading lines of expression, the result being
successfully accomplished through the employment
of an infinite variety of motives. The beautiful
and the useful are so united in sentiment and in
substance, as to yield an equilibrium of repose.
The effect produced, then, is of springing, vital
activity, intelligently balanced by a corresponding
degree of stability. With the “ tertiary ” principle

BY A. NIBMKYER & R. BERTSCH