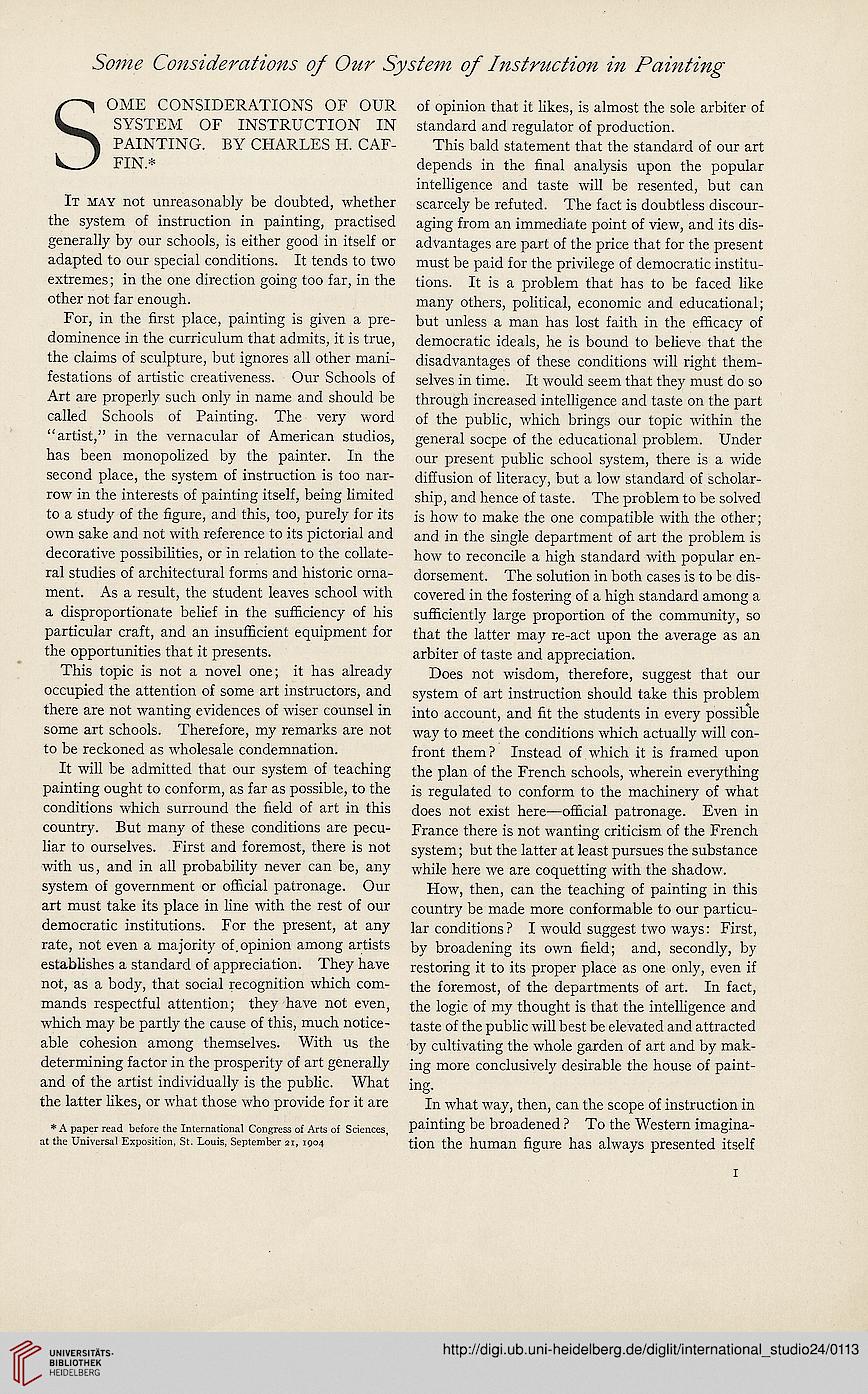 SOME CONSIDERATIONS OF OUR
SYSTEM OF INSTRUCTION IN
PAINTING. BY CHARLES H. CAF-
FIN*
It may not unreasonably be doubted, whether
the system of instruction in painting, practised
generally by our schools, is either good in itself or
adapted to our special conditions. It tends to two
extremes; in the one direction going too far, in the
other not far enough.
For, in the first place, painting is given a pre-
dominence in the curriculum that admits, it is true,
the claims of sculpture, but ignores all other mani-
festations of artistic creativeness. Our Schools of
Art are properly such only in name and should be
called Schools of Painting. The very word
“artist,” in the vernacular of American studios,
has been monopolized by the painter. In the
second place, the system of instruction is too nar-
row in the interests of painting itself, being limited
to a study of the figure, and this, too, purely for its
own sake and not with reference to its pictorial and
decorative possibilities, or in relation to the collate-
ral studies of architectural forms and historic orna-
ment. As a result, the student leaves school with
a disproportionate belief in the sufficiency of his
particular craft, and an insufficient equipment for
the opportunities that it presents.
This topic is not a novel one; it has already
occupied the attention of some art instructors, and
there are not wanting evidences of wiser counsel in
some art schools. Therefore, my remarks are not
to be reckoned as wholesale condemnation.
It will be admitted that our system of teaching
painting ought to conform, as far as possible, to the
conditions which surround the field of art in this
country. But many of these conditions are pecu-
liar to ourselves. First and foremost, there is not
with us, and in all probability never can be, any
system of government or official patronage. Our
art must take its place in line with the rest of our
democratic institutions. For the present, at any
rate, not even a majority of.opinion among artists
establishes a standard of appreciation. They have
not, as a body, that social recognition which com-
mands respectful attention; they have not even,
which may be partly the cause of this, much notice-
able cohesion among themselves. With us the
determining factor in the prosperity of art generally
and of the artist individually is the public. What
the latter likes, or what those who provide for it are
* A paper read before the International Congress of Arts of Sciences,
at the Universal Exposition, St. Louis, September 21, 1904

of opinion that it likes, is almost the sole arbiter of
standard and regulator of production.
This bald statement that the standard of our art
depends in the final analysis upon the popular
intelligence and taste will be resented, but can
scarcely be refuted. The fact is doubtless discour-
aging from an immediate point of view, and its dis-
advantages are part of the price that for the present
must be paid for the privilege of democratic institu-
tions. It is a problem that has to be faced like
many others, political, economic and educational;
but unless a man has lost faith in the efficacy of
democratic ideals, he is bound to believe that the
disadvantages of these conditions will right them-
selves in time. It would seem that they must do so
through increased intelligence and taste on the part
of the public, which brings our topic within the
general socpe of the educational problem. Under
our present public school system, there is a wide
diffusion of literacy, but a low standard of scholar-
ship, and hence of taste. The problem to be solved
is how to make the one compatible with the other;
and in the single department of art the problem is
how to reconcile a high standard with popular en-
dorsement. The solution in both cases is to be dis-
covered in the fostering of a high standard among a
sufficiently large proportion of the community, so
that the latter may re-act upon the average as an
arbiter of taste and appreciation.
Does not wisdom, therefore, suggest that our
system of art instruction should take this problem
into account, and fit the students in every possible
way to meet the conditions which actually will con-
front them? Instead of which it is framed upon
the plan of the French schools, wherein everything
is regulated to conform to the machinery of what
does not exist here—official patronage. Even in
France there is not wanting criticism of the French
system; but the latter at least pursues the substance
while here we are coquetting with the shadow.
How, then, can the teaching of painting in this
country be made more conformable to our particu-
lar conditions ? I would suggest two ways: First,
by broadening its own field; and, secondly, by
restoring it to its proper place as one only, even if
the foremost, of the departments of art. In fact,
the logic of my thought is that the intelligence and
taste of the public will best be elevated and attracted
by cultivating the whole garden of art and by mak-
ing more conclusively desirable the house of paint-
ing.
In what way, then, can the scope of instruction in
painting be broadened ? To the Western imagina-
tion the human figure has always presented itself