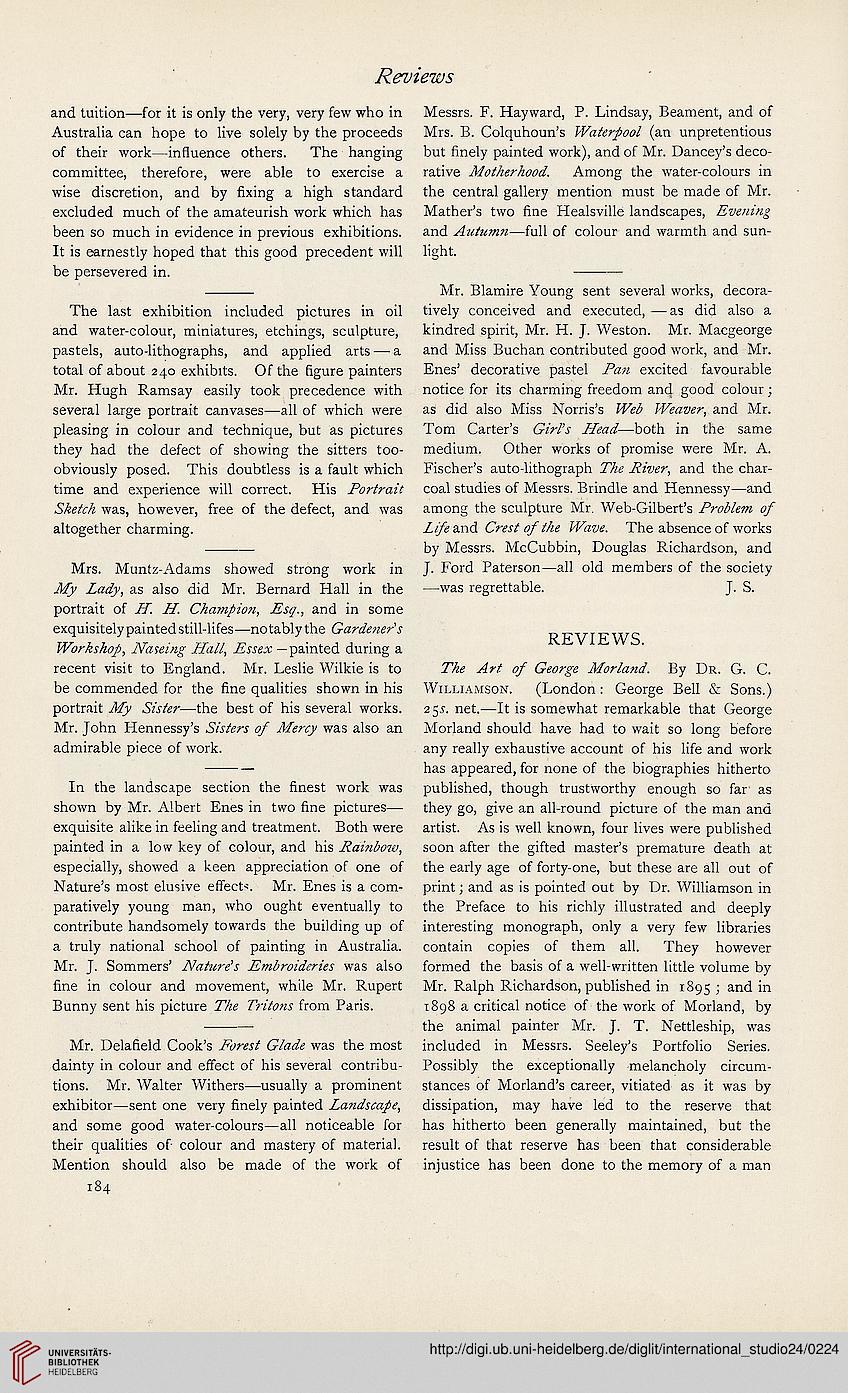 and tuition—for it is only the very, very few who in
Australia can hope to live solely by the proceeds
of their work—influence others. The hanging
committee, therefore, were able to exercise a
wise discretion, and by fixing a high standard
excluded much of the amateurish work which has
been so much in evidence in previous exhibitions.
It is earnestly hoped that this good precedent will
be persevered in.

The last exhibition included pictures in oil
and water-colour, miniatures, etchings, sculpture,
pastels, auto-lithographs, and applied arts — a
total of about 240 exhibits. Of the figure painters
Mr. Hugh Ramsay easily took precedence with
several large portrait canvases—all of which were
pleasing in colour and technique, but as pictures
they had the defect of showing the sitters too-
obviously posed. This doubtless is a fault which
time and experience will correct. His Portrait
Sketch was, however, free of the defect, and was
altogether charming.

Mrs. Muntz-Adams showed strong work in
My Lady, as also did Mr. Bernard Hall in the
portrait of IT. H. Champion, Esq., and in some
exquisitely painted still-lifes—notably the Gardener's
Workshop, Naseing Hall, Essex — painted during a
recent visit to England. Mr. Leslie Wilkie is to
be commended for the fine qualities shown in his
portrait My Sister—the best of his several works.
Mr. John Hennessy’s Sisters of Mercy was also an
admirable piece of work.

In the landscape section the finest work was
shown by Mr. Albert Enes in two fine pictures—
exquisite alike in feeling and treatment. Both were
painted in a low key of colour, and his Rainbow,
especially, showed a keen appreciation of one of
Nature’s most elusive effect*. Mr. Enes is a com-
paratively young man, who ought eventually to
contribute handsomely towards the building up of
a truly national school of painting in Australia.
Mr. J. Sommers’ Nature's Embroideries was also
fine in colour and movement, while Mr. Rupert
Bunny sent his picture The Tritons from Paris.

Mr. Delafield Cook’s Forest Glade was the most
dainty in colour and effect of his several contribu-
tions. Mr. Walter Withers—usually a prominent
exhibitor—sent one very finely painted Landscape,
and some good water-colours—all noticeable for
their qualities of colour and mastery of material.
Mention should also be made of the work of
184

Messrs. F. Hayward, P. Lindsay, Beament, and of
Mrs. B. Colquhoun’s Waterpool (an unpretentious
but finely painted work), and of Mr. Dancey’s deco-
rative Motherhood. Among the water-colours in
the central gallery mention must be made of Mr.
Mather’s two fine Healsville landscapes, Evening
and Autumn—full of colour and warmth and sun-
light.

Mr. Blamire Young sent several works, decora-
tively conceived and executed, —as did also a
kindred spirit, Mr. H. J. Weston. Mr. Macgeorge
and Miss Buchan contributed good work, and Mr.
Enes’ decorative pastel Pan excited favourable
notice for its charming freedom and good colour;
as did also Miss Norris’s Web Weaver, and Mr.
Tom Carter’s Girl’s Head—both in the same
medium. Other works of promise were Mr. A.
Fischer’s auto-lithograph The River, and the char-
coal studies of Messrs. Brindle and Hennessy—and
among the sculpture Mr. Web-Gilbert’s Problem of
Life and Crest of the Wave. The absence of works
by Messrs. McCubbin, Douglas Richardson, and
J. Ford Paterson—all old members of the society
—was regrettable. J. S.
REVIEWS.
The Art of George Morland. By Dr. G. C.
Williamson. (London: George Bell & Sons.)
25s. net.—It is somewhat remarkable that George
Morland should have had to wait so long before
any really exhaustive account of his life and work
has appeared, for none of the biographies hitherto
published, though trustworthy enough so far as
they go, give an all-round picture of the man and
artist. As is well known, four lives were published
soon after the gifted master’s premature death at
the early age of forty-one, but these are all out of
print; and as is pointed out by Dr. Williamson in
the Preface to his richly illustrated and deeply
interesting monograph, only a very few libraries
contain copies of them all. They however
formed the basis of a well-written little volume by
Mr. Ralph Richardson, published in 1895 ; and in
1898 a critical notice of the work of Morland, by
the animal painter Mr. J. T. Nettleship, was
included in Messrs. Seeley’s Portfolio Series.
Possibly the exceptionally melancholy circum-
stances of Morland’s career, vitiated as it was by
dissipation, may have led to the reserve that
has hitherto been generally maintained, but the
result of that reserve has been that considerable
injustice has been done to the memory of a man