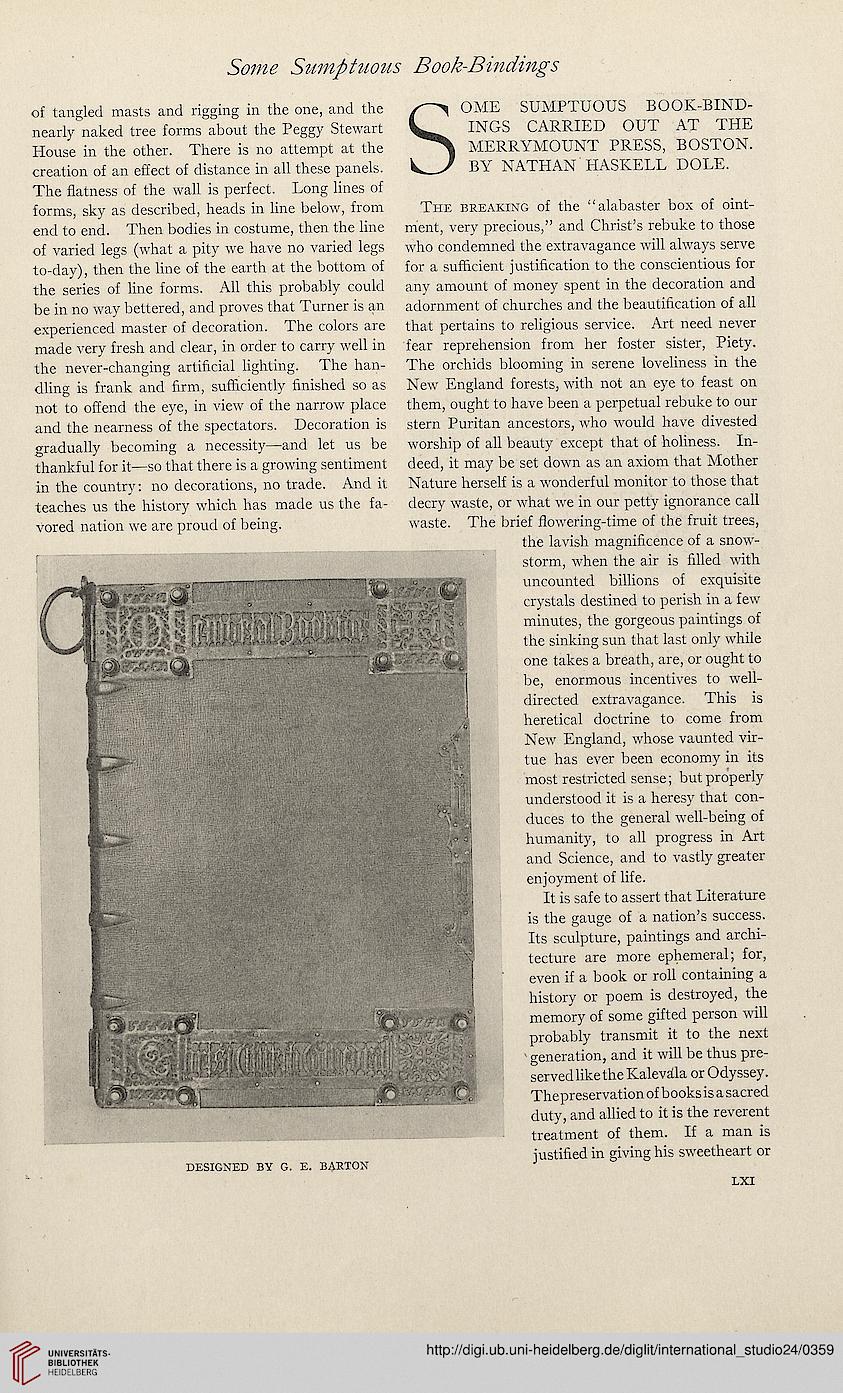 of tangled masts and rigging in the one, and the
nearly naked tree forms about the Peggy Stewart
House in the other. There is no attempt at the
creation of an effect of distance in all these panels.
The flatness of the wall is perfect. Long lines of
forms, sky as described, heads in line below, from
end to end. Then bodies in costume, then the line
of varied legs (what a pity we have no varied legs
to-day), then the line of the earth at the bottom of
the series of line forms. All this probably could
be in no way bettered, and proves that Turner is an
experienced master of decoration. The colors are
made very fresh and clear, in order to carry well in
the never-changing artificial lighting. The han-
dling is frank and firm, sufficiently finished so as
not to offend the eye, in view of the narrow place
and the nearness of the spectators. Decoration is
gradually becoming a necessity—and let us be
thankful for it—so that there is a growing sentiment
in the country: no decorations, no trade. And it
teaches us the history which has made us the fa-
vored nation we are proud of being.

SOME SUMPTUOUS BOOK-BIND-
INGS CARRIED OUT AT THE
MERRYMOUNT PRESS, BOSTON.
BY NATHAN HASKELL DOLE.
The breaking of the “alabaster box of oint-
ment, very precious,” and Christ’s rebuke to those
who condemned the extravagance will always serve
for a sufficient justification to the conscientious for
any amount of money spent in the decoration and
adornment of churches and the beautification of all
that pertains to religious service. Art need never
fear reprehension from her foster sister, Piety.
The orchids blooming in serene loveliness in the
New England forests, with not an eye to feast on
them, ought to have been a perpetual rebuke to our
stern Puritan ancestors, who would have divested
worship of all beauty except that of holiness. In-
deed, it may be set down as an axiom that Mother
Nature herself is a wonderful monitor to those that
decry waste, or what we in our petty ignorance call
waste. The brief flowering-time of the fruit trees,
the lavish magnificence of a snow-
storm, when the air is filled with
uncounted billions of exquisite
crystals destined to perish in a few
minutes, the gorgeous paintings of
the sinking sun that last only while
one takes a breath, are, or ought to
be, enormous incentives to well-
directed extravagance. This is
heretical doctrine to come from
New England, whose vaunted vir-
tue has ever been economy in its
most restricted sense; but properly
understood it is a heresy that con-
duces to the general well-being of
humanity, to all progress in Art
and Science, and to vastly greater
enjoyment of life.
It is safe to assert that Literature
is the gauge of a nation’s success.
Its sculpture, paintings and archi-
tecture are more ephemeral; for,
even if a book or roll containing a
history or poem is destroyed, the
memory of some gifted person will
probably transmit it to the next
' generation, and it will be thus pre-
served like the Kalevhla or Odyssey.
Thepreservation of books is a sacred
duty, and allied to it is the reverent
treatment of them. If a man is
justified in giving his sweetheart or