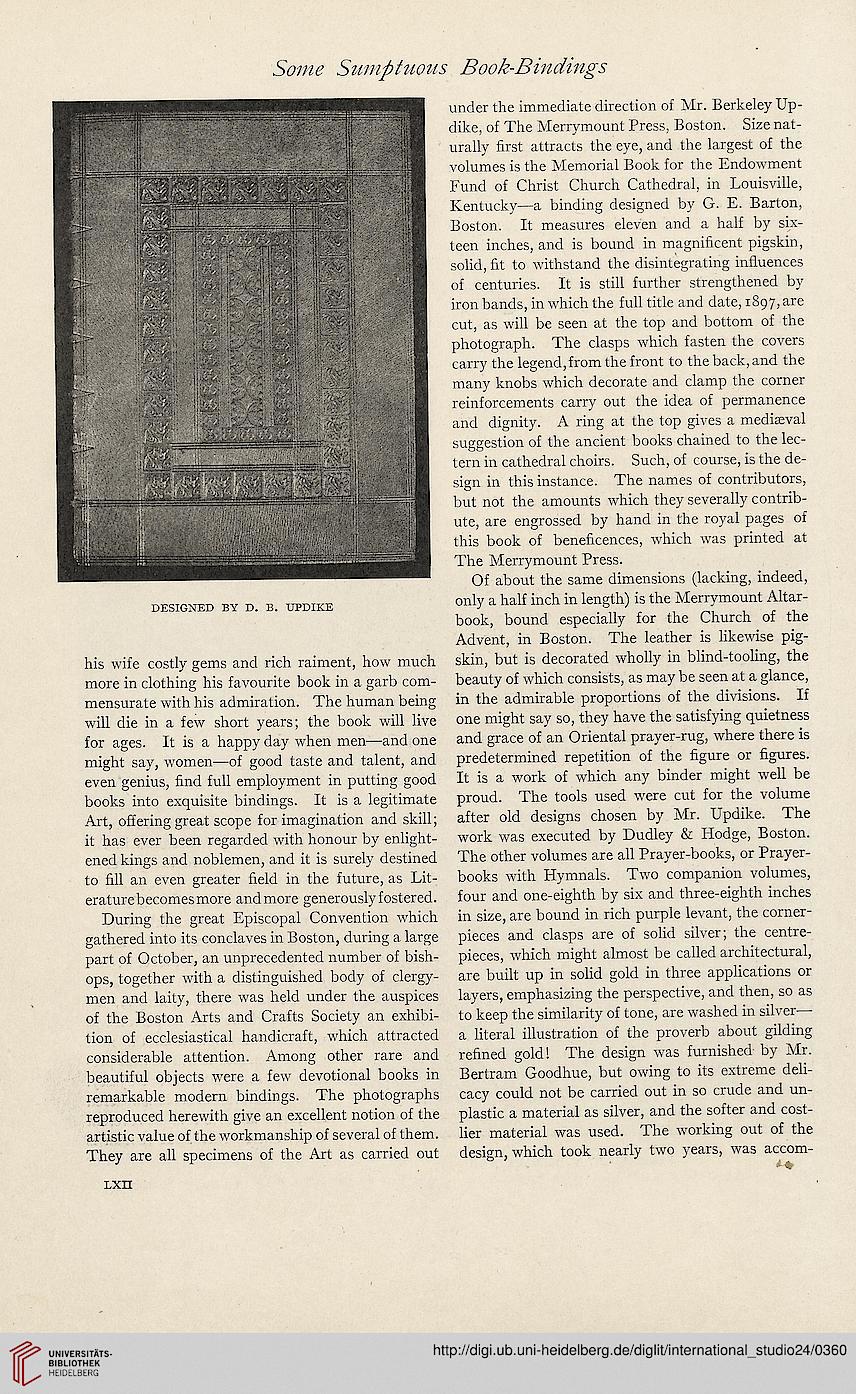 
DESIGNED BY D. B. UPDIKE
his wife costly gems and rich raiment, how much
more in clothing his favourite book in a garb com-
mensurate with his admiration. The human being
will die in a few short years; the book will live
for ages. It is a happy day when men—and one
might say, women—of good taste and talent, and
even genius, find full employment in putting good
books into exquisite bindings. It is a legitimate
Art, offering great scope for imagination and skill;
it has ever been regarded with honour by enlight-
ened kings and noblemen, and it is surely destined
to fill an even greater field in the future, as Lit-
erature becomes more and more generously fostered.
During the great Episcopal Convention which
gathered into its conclaves in Boston, during a large
part of October, an unprecedented number of bish-
ops, together with a distinguished body of clergy-
men and laity, there was held under the auspices
of the Boston Arts and Crafts Society an exhibi-
tion of ecclesiastical handicraft, which attracted
considerable attention. Among other rare and
beautiful objects were a few devotional books in
remarkable modern bindings. The photographs
reproduced herewith give an excellent notion of the
artistic value of the workmanship of several of them.
They are all specimens of the Art as carried out

under the immediate direction of Mr. Berkeley Up-
dike, of The Merrymount Press, Boston. Size nat-
urally first attracts the eye, and the largest of the
volumes is the Memorial Book for the Endowment
Fund of Christ Church Cathedral, in Louisville,
Kentucky—a binding designed by G. E. Barton,
Boston. It measures eleven and a half by six-
teen inches, and is bound in magnificent pigskin,
solid, fit to withstand the disintegrating influences
of centuries. It is still further strengthened by
iron bands, in which the full title and date, 1897, are
cut, as will be seen at the top and bottom of the
photograph. The clasps which fasten the covers
carry the legend,from the front to the back, and the
many knobs which decorate and clamp the corner
reinforcements carry out the idea of permanence
and dignity. A ring at the top gives a mediaeval
suggestion of the ancient books chained to the lec-
tern in cathedral choirs. Such, of course, is the de-
sign in this instance. The names of contributors,
but not the amounts which they severally contrib-
ute, are engrossed by hand in the royal pages of
this book of beneficences, which was printed at
The Merrymount Press.
Of about the same dimensions (lacking, indeed,
only a half inch in length) is the Merrymount Altar-
book, bound especially for the Church of the
Advent, in Boston. The leather is likewise pig-
skin, but is decorated wholly in blind-tooling, the
beauty of which consists, as may be seen at a glance,
in the admirable proportions of the divisions. If
one might say so, they have the satisfying quietness
and grace of an Oriental prayer-rug, where there is
predetermined repetition of the figure or figures.
It is a work of which any binder might well be
proud. The tools used were cut for the volume
after old designs chosen by Mr. Updike. The
work was executed by Dudley & Hodge, Boston.
The other volumes are all Prayer-books, or Prayer-
books with Hymnals. Two companion volumes,
four and one-eighth by six and three-eighth inches
in size, are bound in rich purple levant, the corner-
pieces and clasps are of solid silver; the centre-
pieces, which might almost be called architectural,
are built up in solid gold in three applications or
layers, emphasizing the perspective, and then, so as
to keep the similarity of tone, are washed in silver—
a literal illustration of the proverb about gilding
refined gold! The design was furnished by Mr.
Bertram Goodhue, but owing to its extreme deli-
cacy could not be carried out in so crude and un-
plastic a material as silver, and the softer and cost-
lier material was used. The working out of the
design, which took nearly two years, was accom-