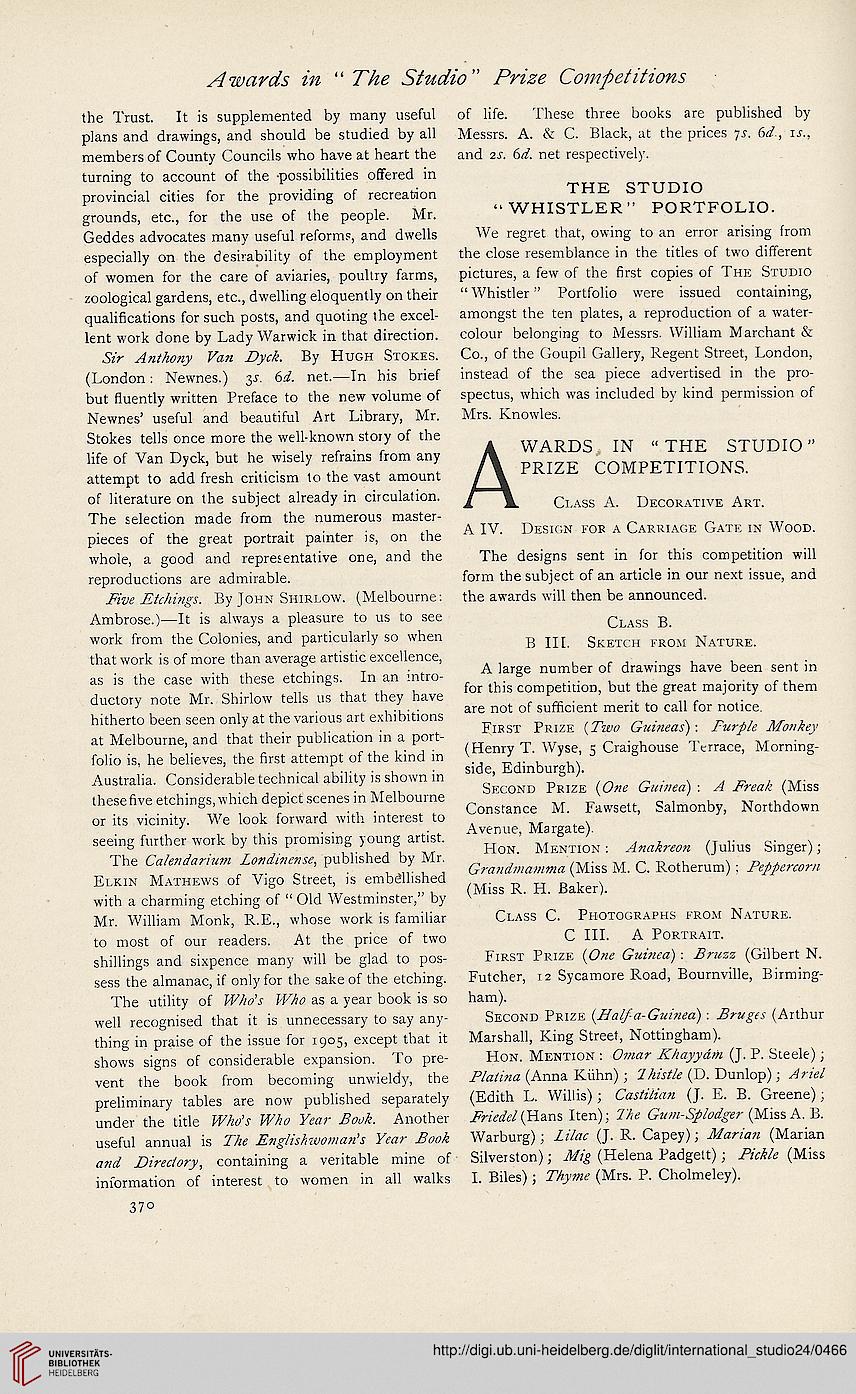 Information about OCR text
Awards in “ The Studio” Prize Competitions

the Trust. It is supplemented by many useful
plans and drawings, and should be studied by all
members of County Councils who have at heart the
turning to account of the possibilities offered in
provincial cities for the providing of recreation
grounds, etc., for the use of the people. Mr.
Geddes advocates many useful reforms, and dwells
especially on the desirability of the employment
of women for the care of aviaries, poultry farms,
zoological gardens, etc., dwelling eloquently on their
qualifications for such posts, and quoting the excel-
lent work done by Lady Warwick in that direction.
Sir Anthony Van Dyck. By Hugh Stokes.
(London: Newnes.) y. 6d. net.—Tn his brief
but fluently written Preface to the new volume of
Newnes’ useful and beautiful Art Library, Mr.
Stokes tells once more the well-known story of the
life of Van Dyck, but he wisely refrains from any
attempt to add fresh criticism to the vast amount
of literature on the subject already in circulation.
The selection made from the numerous master-
pieces of the great portrait painter is, on the
whole, a good and representative one, and the
reproductions are admirable.
Five Etchings. By John Shirlow. (Melbourne:
Ambrose.)—It is always a pleasure to us to see
work from the Colonies, and particularly so when
that work is of more than average artistic excellence,
as is the case with these etchings. In an intro-
ductory note Mr. Shirlow tells us that they have
hitherto been seen only at the various art exhibitions
at Melbourne, and that their publication in a port-
folio is, he believes, the first attempt of the kind in
Australia. Considerable technical ability is shown in
thesefive etchings, which depict scenes in Melbourne
or its vicinity. We look forward with interest to
seeing further work by this promising young artist.
The Calendarium Londincnse, published by Mr.
Elkin Mathews of Vigo Street, is embellished
with a charming etching of “ Old Westminster,” by
Mr. William Monk, R.E., whose work is familiar
to most of our readers. At the price of two
shillings and sixpence many will be glad to pos-
sess the almanac, if only for the sake of the etching.
The utility of Who’s Who as a year book is so
well recognised that it is unnecessary to say any-
thing in praise of the issue for 1905, except that it
shows signs of considerable expansion. To pre-
vent the book from becoming unwieldy, the
preliminary tables are now published separately
under the title Who's Who Year Book. Another
useful annual is The Englishwoman's Year Book
and Directory, containing a veritable mine of
information of interest to women in all walks

of life. These three books are published by
Messrs. A. & C. Black, at the prices 7s. 6d., is.,
and 2s. 6d. net respectively.
THE STUDIO
“WHISTLER” PORTFOLIO.
We regret that, owing to an error arising from
the close resemblance in the titles of two different
pictures, a few of the first copies of The; Studio
“ Whistler ” Portfolio were issued containing,
amongst the ten plates, a reproduction of a water-
colour belonging to Messrs. William Marchant &
Co., of the Goupil Gallery, Regent Street, London,
instead of the sea piece advertised in the pro-
spectus, which was included by kind permission of
Mrs. Knowles.
WARDS IN “ THE STUDIO ”
PRIZE COMPETITIONS.
Class A. Decorative Art.
A IV. Design for a Carriage Gate in Wood.
The designs sent in for this competition will
form the subject of an article in our next issue, and
the awards will then be announced.
Class B.
B III. Sketch from Nature.
A large number of drawings have been sent in
for this competition, but the great majority of them
are not of sufficient merit to call for notice.
First Prize (Two Guineas): Purple Monkey
(Henry T. Wyse, 5 Craighouse Terrace, Morning-
side, Edinburgh).
Second Prize (One Guinea) : A Freak (Miss
Constance M. Fawsett, Salmonby, Northdown
Avenue, Margate).
Hon. Mention: Anakreon (Julius Singer);
Grandmamma (Miss M. C. Rotherum) : Peppercorn
(Miss R. H. Baker).
Class C. Photographs from Nature.
C III. A Portrait.
First Prize {One Guinea): Brtizz (Gilbert N.
Futcher, 12 Sycamore Road, Boumville, Birming-
ham).
Second Prize {Balfa-Guinea): Bruges (Arthur
Marshall, King Street, Nottingham).
Hon. Mention : Omar Khayyam (J. P. Steele);
Plaiina (Anna Kiihn) ; 'lhistle (D. Dunlop) ; Ariel
(Edith L. Willis); Castilian (J. E. B. Greene);
Priedel (Hans Iten); The Gum-Splodger (Miss A. B.
Warburg); Lilac (J. R. Capey); Marian (Marian
Silverston); Mig (Helena Padgett); Pickle (Miss
I. Biles); Thyme (Mrs. P. Cholmeley).