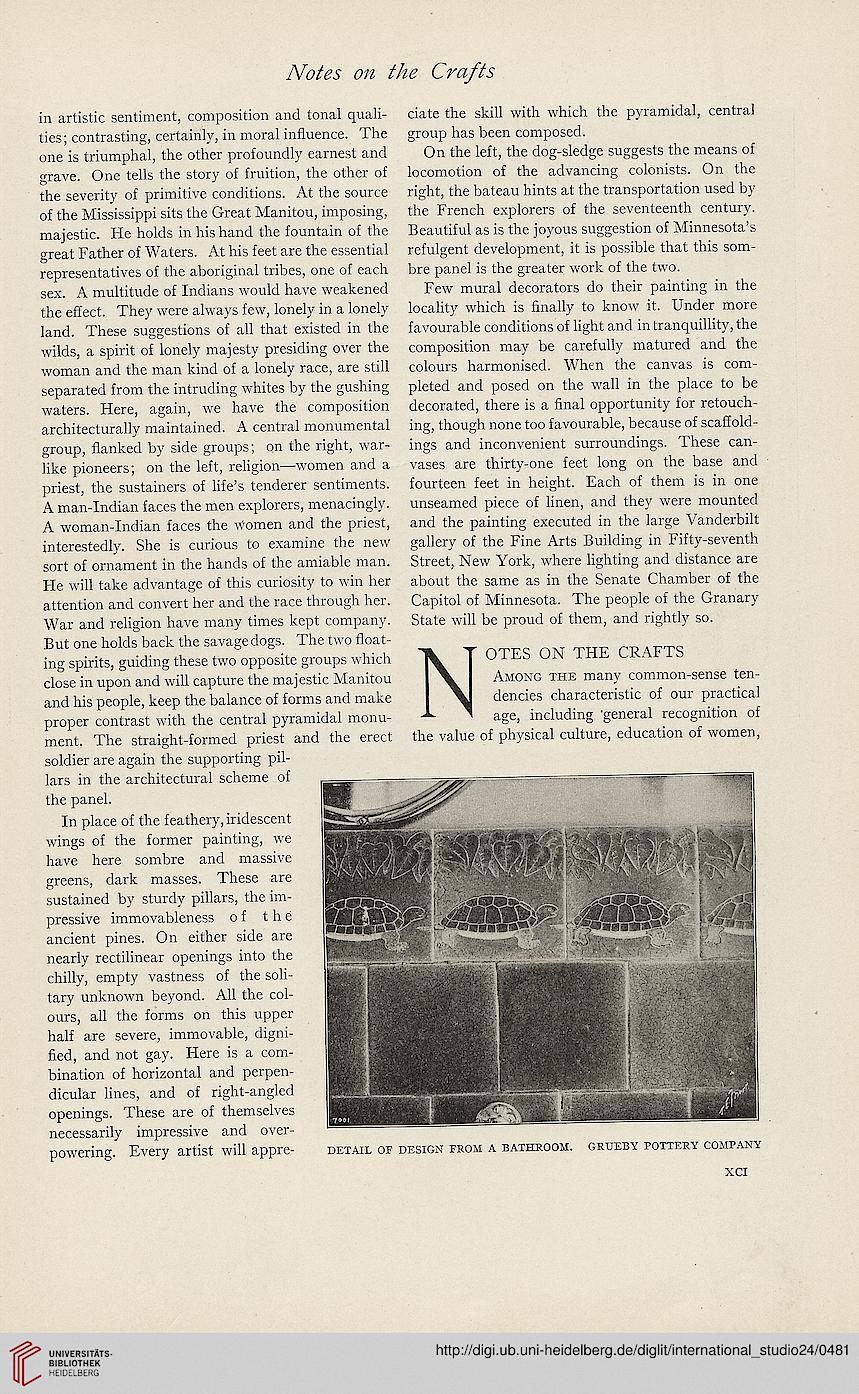 
in artistic sentiment, composition and tonal quali-
ties; contrasting, certainly, in moral influence. The
one is triumphal, the other profoundly earnest and
grave. One tells the story of fruition, the other of
the severity of primitive conditions. At the source
of the Mississippi sits the Great Manitou, imposing,
majestic. He holds in his hand the fountain of the
great Father of Waters. At his feet are the essential
representatives of the aboriginal tribes, one of each
sex. A multitude of Indians would have weakened
the effect. They were always few, lonely in a lonely
land. These suggestions of all that existed in the
wilds, a spirit of lonely majesty presiding over the
woman and the man kind of a lonely race, are still
separated from the intruding whites by the gushing
waters. Here, again, we have the composition
architecturally maintained. A central monumental
group, flanked by side groups; on the right, war-
like pioneers; on the left, religion—women and a
priest, the sustainers of life’s tenderer sentiments.
A man-Indian faces the men explorers, menacingly.
A woman-Indian faces the women and the priest,
interestedly. She is curious to examine the new
sort of ornament in the hands of the amiable man.
Fie will take advantage of this curiosity to win her
attention and convert her and the race through her.
War and religion have many times kept company.
But one holds back the savage dogs. The two float-
ing spirits, guiding these two opposite groups which
close in upon and will capture the majestic Manitou
and his people, keep the balance of forms and make
proper contrast with the central pyramidal monu-
ment. The straight-formed priest and the erect
soldier are again the supporting pil-
lars in the architectural scheme of
the panel.
In place of the feathery, iridescent
wings of the former painting, we
have here sombre and massive
greens, dark masses. These are
sustained by sturdy pillars, the im-
pressive immovableness of the
ancient pines. On either side are
nearly rectilinear openings into the
chilly, empty vastness of the soli-
tary unknown beyond. All the col-
ours, all the forms on this upper
half are severe, immovable, digni-
fied, and not gay. Here is a com-
bination of horizontal and perpen-
dicular lines, and of right-angled
openings. These are of themselves
necessarily impressive and over-
powering. Every artist will appre- detail of design from a bathroom, grxjeby pottery company

ciate the skill with which the pyramidal, central
group has been composed.
On the left, the dog-sledge suggests the means of
locomotion of the advancing colonists. On the
right, the bateau hints at the transportation used by
the French explorers of the seventeenth century.
Beautiful as is the joyous suggestion of Minnesota’s
refulgent development, it is possible that this som-
bre panel is the greater work of the two.
Few mural decorators do their painting in the
locality which is finally to know it. Under more
favourable conditions of light and in tranquillity, the
composition may be carefully matured and the
colours harmonised. When the canvas is com-
pleted and posed on the wall in the place to be
decorated, there is a final opportunity for retouch-
ing, though none too favourable, because of scaffold-
ings and inconvenient surroundings. These can-
vases are thirty-one feet long on the base and
fourteen feet in height. Each of them is in one
unseamed piece of linen, and they were mounted
and the painting executed in the large Vanderbilt
gallery of the Fine Arts Building in Fifty-seventh
Street, New York, where lighting and distance are
about the same as in the Senate Chamber of the
Capitol of Minnesota. The people of the Granary
State will be proud of them, and rightly so.
Notes on the crafts
Among the many common-sense ten-
dencies characteristic of our practical
age, including 'general recognition of
the value of physical culture, education of women,