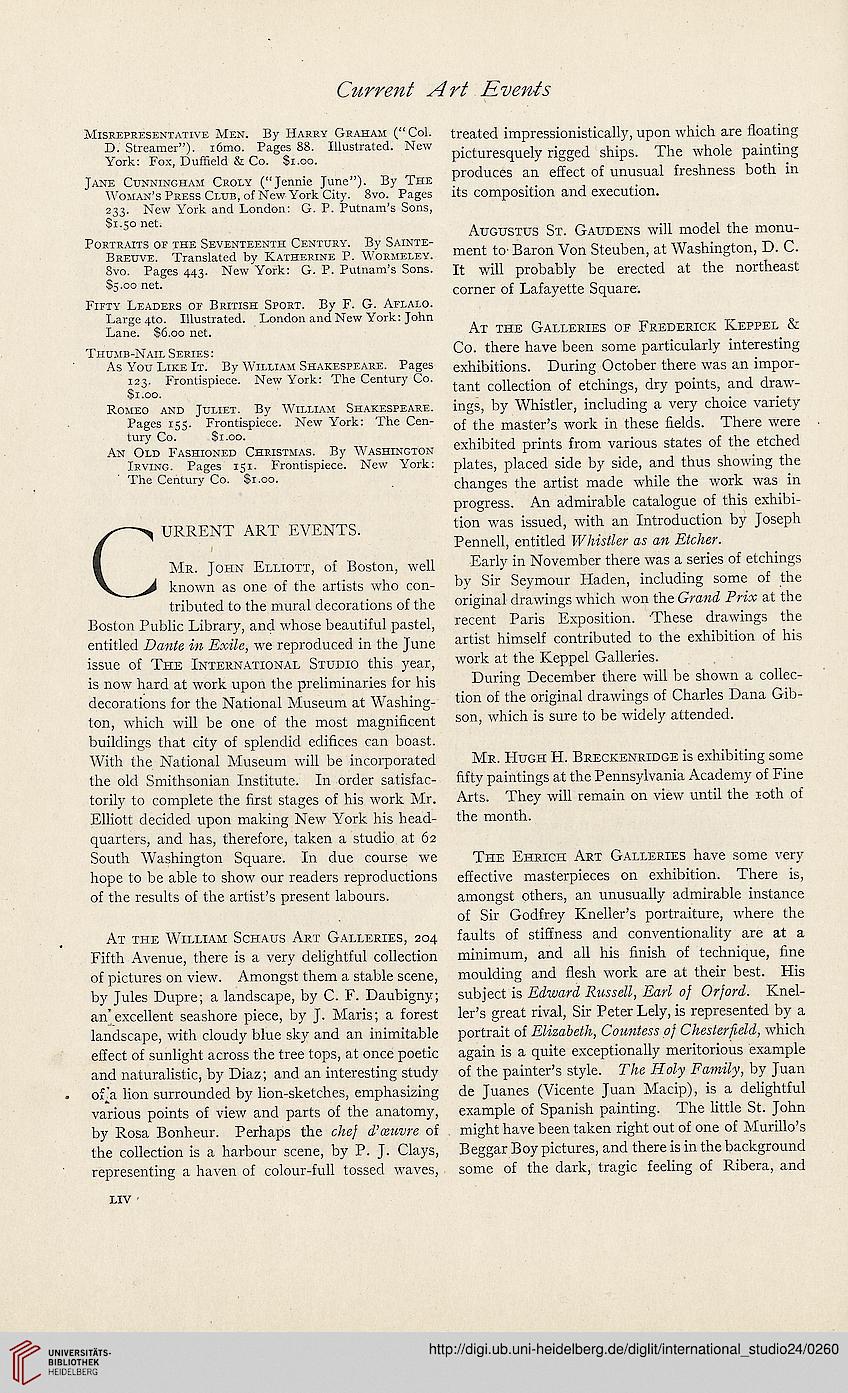 CURRENT ART EVENTS.
Me. John Elliott, of Boston, well
known as one of the artists who con-
tributed to the mural decorations of the
Boston Public Library, and whose beautiful pastel,
entitled Dante in Exile, we reproduced in the June
issue of The International Studio this year,
is now hard at work upon the preliminaries for his
decorations for the National Museum at Washing-
ton, which will be one of the most magnificent
buildings that city of splendid edifices can boast.
With the National Museum will be incorporated
the old Smithsonian Institute. In order satisfac-
torily to complete the first stages of his work Mr.
Elliott decided upon making New York his head-
quarters, and has, therefore, taken a studio at 62
South Washington Square. In due course we
hope to be able to show our readers reproductions
of the results of the artist’s present labours.

At the William Schaus Art Galleries, 204
Fifth Avenue, there is a very delightful collection
of pictures on view. Amongst them a stable scene,
by Jules Dupre; a landscape, by C. F. Daubigny;
an’excellent seashore piece, by J. Maris; a forest
landscape, with cloudy blue sky and an inimitable
effect of sunlight across the tree tops, at once poetic
and naturalistic, by Diaz; and an interesting study
oLa lion surrounded by lion-sketches, emphasizing
various points of view and parts of the anatomy,
by Rosa Bonheur. Perhaps the chef d’ceuvre of
the collection is a harbour scene, by P. J. Clays,
representing a haven of colour-full tossed waves,

treated impressionistically, upon which are floating
picturesquely rigged ships. The whole painting
produces an effect of unusual freshness both in
its composition and execution.
Augustus St. Gaudens will model the monu-
ment to- Baron Von Steuben, at Washington, D. C.
It will probably be erected at the northeast
corner of Lafayette Square.
At the Galleries oe Frederick Keppel &
Co. there have been some particularly interesting
exhibitions. During October there was an impor-
tant collection of etchings, dry points, and draw-
ings, by Whistler, including a very choice variety
of the master’s work in these fields. There were
exhibited prints from various states of the etched
plates, placed side by side, and thus showing the
changes the artist made while the work was in
progress. An admirable catalogue of this exhibi-
tion was issued, with an Introduction by Joseph
Pennell, entitled Whistler as an Etcher.
Early in November there was a series of etchings
by Sir Seymour Haden, including some of the
original drawings which won the Grand Prix at the
recent Paris Exposition. These drawings the
artist himself contributed to the exhibition of his
work at the Keppel Galleries.
During December there will be shown a collec-
tion of the original drawings of Charles Dana Gib-
son, which is sure to be widely attended.
Mr. FIugh H. Breckenridge is exhibiting some
fifty paintings at the Pennsylvania Academy of Fine
Arts. They will remain on view until the 10th of
the month.
The Eiirich Art Galleries have some very
effective masterpieces on exhibition. There is,
amongst others, an unusually admirable instance
of Sir Godfrey Kneller’s portraiture, where the
faults of stiffness and conventionality are at a
minimum, and all his finish of technique, fine
moulding and flesh work are at their best. His
subject is Edward Russell, Earl of Orford. Knel-
ler’s great rival, Sir Peter Lely, is represented by a
portrait of Elizabeth, Countess of Chesterfield, which
again is a quite exceptionally meritorious example
of the painter’s style. The Holy Family, by Juan
de Juanes (Vicente Juan Macip), is a delightful
example of Spanish painting. The little St. John
might have been taken right out of one of Murillo’s
Beggar Boy pictures, and there is in the background
some of the dark, tragic feeling of Ribera, and