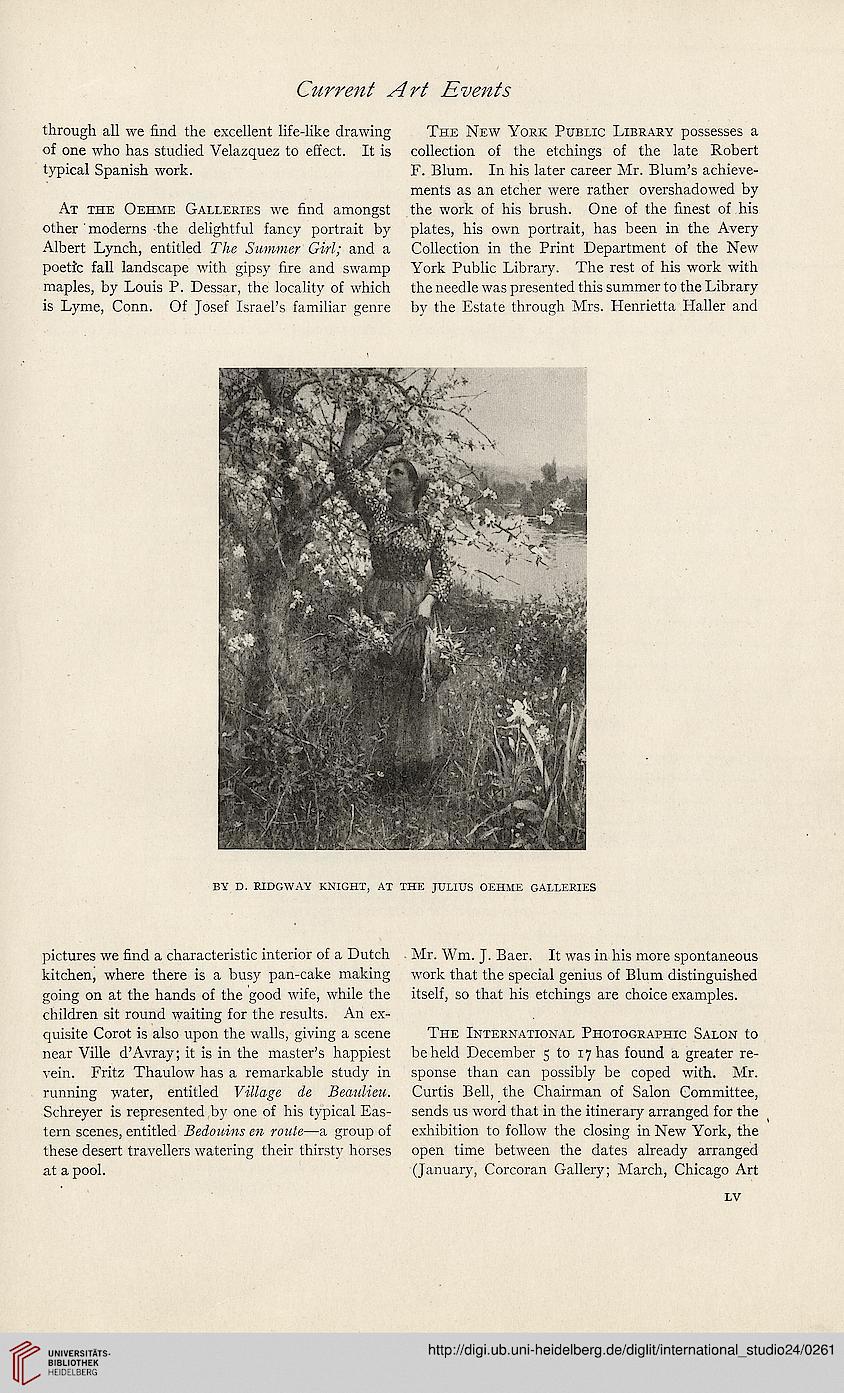 through all we find the excellent life-like drawing
of one who has studied Velazquez to effect. It is
typical Spanish work.
At the Oehme Galleries we find amongst
other ' moderns the delightful fancy portrait by
Albert Lynch, entitled The Summer Girl; and a
poetic fall landscape with gipsy fire and swamp
maples, by Louis P. Dessar, the locality of which
is Lyme, Conn. Of Josef Israel’s familiar genre

The New York Public Library possesses a
collection of the etchings of the late Robert
F. Blum. In his later career Mr. Blum’s achieve-
ments as an etcher were rather overshadowed by
the work of his brush. One of the finest of his
plates, his own portrait, has been in the Avery
Collection in the Print Department of the New
York Public Library. The rest of his work with
the needle was presented this summer to the Library
by the Estate through Mrs. Henrietta Haller and


BY D. RIDGWAY KNIGHT, AT THE JULIUS OEHME GALLERIES

pictures we find a characteristic interior of a Dutch
kitchen, where there is a busy pan-cake making
going on at the hands of the good wife, while the
children sit round waiting for the results. An ex-
quisite Corot is also upon the walls, giving a scene
near Ville d’Avray; it is in the master’s happiest
vein. Fritz Thaulow has a remarkable study in
running water, entitled Village de Beaulieu.
Schreyer is represented by one of his typical Eas-
tern scenes, entitled Bedouins en route—a group of
these desert travellers watering their thirsty horses
at a pool.

Mr. Wm. J. Baer. It was in his more spontaneous
work that the special genius of Blum distinguished
itself, so that his etchings are choice examples.
The International Photographic Salon to
be held December 5 to 17 has found a greater re-
sponse than can possibly be coped with. Mr.
Curtis Bell, the Chairman of Salon Committee,
sends us word that in the itinerary arranged for the
exhibition to follow the closing in New York, the
open time between the dates already arranged
(January, Corcoran Gallery; March, Chicago Art