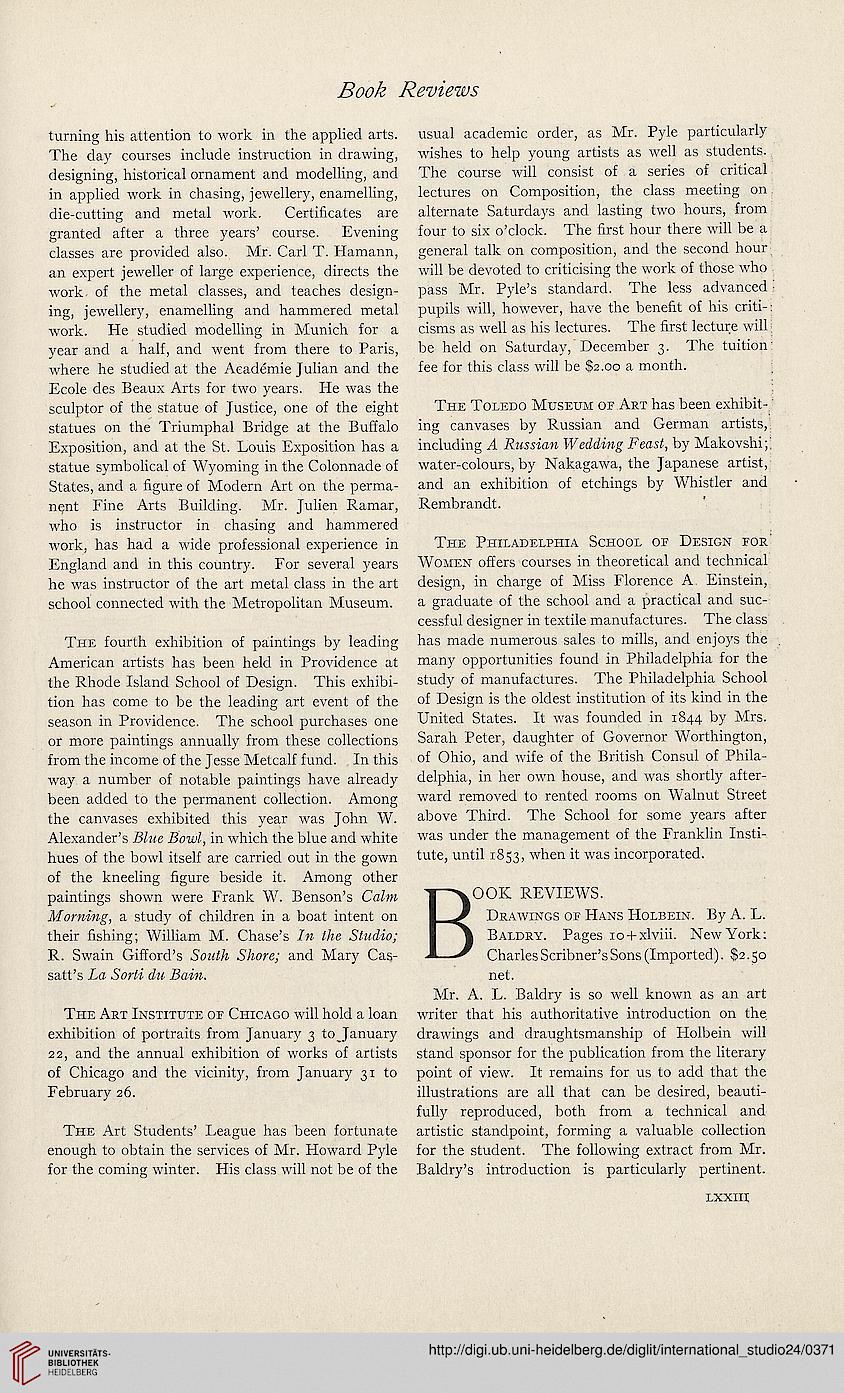 turning his attention to work in the applied arts.
The day courses include instruction in drawing,
designing, historical ornament and modelling, and
in applied work in chasing, jewellery, enamelling,
die-cutting and metal work. Certificates are
granted after a three years’ course. Evening
classes are provided also. Mr. Carl T. Hamann,
an expert jeweller of large experience, directs the
work of the metal classes, and teaches design-
ing, jewellery, enamelling and hammered metal
work. He studied modelling in Munich for a
year and a half, and went from there to Paris,
where he studied at the Academie Julian and the
Ecole des Beaux Arts for two years. He was the
sculptor of the statue of Justice, one of the eight
statues on the Triumphal Bridge at the Buffalo
Exposition, and at the St. Louis Exposition has a
statue symbolical of Wyoming in the Colonnade of
States, and a figure of Modern Art on the perma-
nent Fine Arts Building. Mr. Julien Ramar,
who is instructor in chasing and hammered
work, has had a wide professional experience in
England and in this country. For several years
he was instructor of the art metal class in the art
school connected with the Metropolitan Museum.
The fourth exhibition of paintings by leading
American artists has been held in Providence at
the Rhode Island School of Design. This exhibi-
tion has come to be the leading art event of the
season in Providence. The school purchases one
or more paintings annually from these collections
from the income of the Jesse Metcalf fund. In this
way a number of notable paintings have already
been added to the permanent collection. Among
the canvases exhibited this year was John W.
Alexander’s Blue Bowl, in which the blue and white
hues of the bowl itself are carried out in the gown
of the kneeling figure beside it. Among other
paintings shown were Frank W. Benson’s Calm
Morning, a study of children in a boat intent on
their fishing; William M. Chase’s In the Studio;
R. Swain Gifford’s South Shore; and Mary Cas-
satt’s La Sorti du Bain.
The Art Institute of Chicago will hold a loan
exhibition of portraits from January 3 to January
22, and the annual exhibition of works of artists
of Chicago and the vicinity, from January 31 to
February 26.
The Art Students’ League has been fortunate
enough to obtain the services of Mr. Howard Pyle
for the coming winter. His class will not be of the

usual academic order, as Mr. Pyle particularly
wishes to help young artists as well as students.
The course will consist of a series of critical
lectures on Composition, the class meeting on
alternate Saturdays and lasting two hours, from
four to six o’clock. The first hour there will be a
general talk on composition, and the second hour
will be devoted to criticising the work of those who
pass Mr. Pyle’s standard. The less advanced
pupils will, however, have the benefit of his criti-
cisms as well as his lectures. The first lecture will
be held on Saturday, December 3. The tuition
fee for this class will be $2.00 a month.
The Toledo Museum of Art has been exhibit-
ing canvases by Russian and German artists,
including A Russian Wedding Feast, by Makovshi;
water-colours, by Nakagawa, the Japanese artist,
and an exhibition of etchings by Whistler and
Rembrandt.
The Philadelphia School of Design for
Women offers courses in theoretical and technical
design, in charge of Miss Florence A Einstein,
a graduate of the school and a practical and suc-
cessful designer in textile manufactures. The class
has made numerous sales to mills, and enjoys the
many opportunities found in Philadelphia for the
study of manufactures. The Philadelphia School
of Design is the oldest institution of its kind in the
United States. It was founded in 1844 by Mrs.
Sarah Peter, daughter of Governor Worthington,
of Ohio, and wife of the British Consul of Phila-
delphia, in her own house, and was shortly after-
ward removed to rented rooms on Walnut Street
above Third. The School for some years after
was under the management of the Franklin Insti-
tute, until 1853, when it was incorporated.
Book reviews.
Drawings of Hans Holbein. By A. L.
Baldry. Pages 10 + xlviii. New York:
Charles Scribner’s Sons (Imported). $2.50
net.
Mr. A. L. Baldry is so well known as an art
writer that his authoritative introduction on the
drawings and draughtsmanship of Holbein will
stand sponsor for the publication from the literary
point of view. It remains for us to add that the
illustrations are all that can be desired, beauti-
fully reproduced, both from a technical and
artistic standpoint, forming a valuable collection
for the student. The following extract from Mr.
Baldry’s introduction is particularly pertinent.