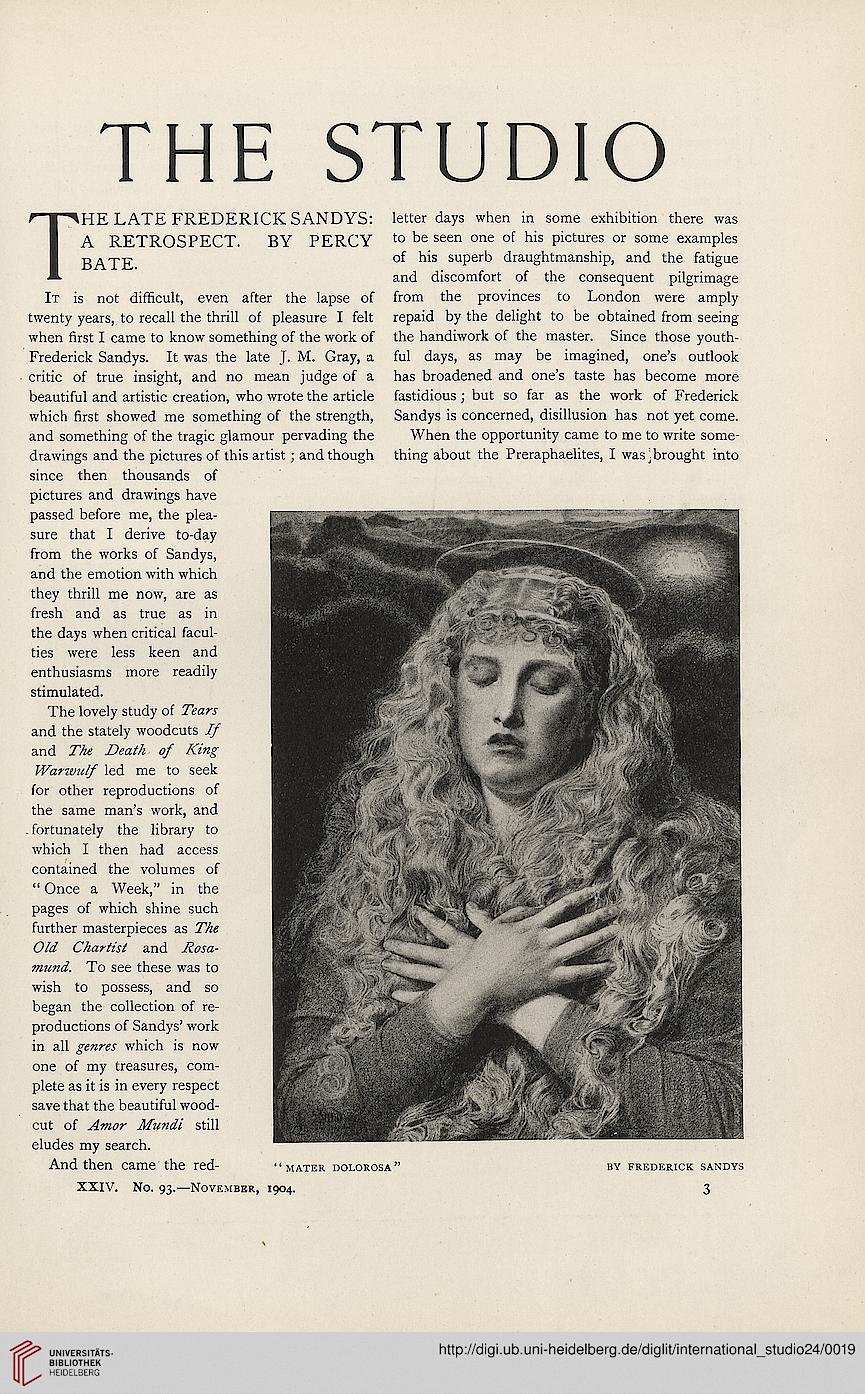 The late Frederick sandys:
A RETROSPECT. BY PERCY
BATE.
It is not difficult, even after the lapse of
twenty years, to recall the thrill of pleasure I felt
when first I came to know something of the work of
Frederick Sandys. It was the late J. M. Gray, a
critic of true insight, and no mean judge of a
beautiful and artistic creation, who wrote the article
which first showed me something of the strength,
and something of the tragic glamour pervading the
drawings and the pictures of this artist; and though
since then thousands of
pictures and drawings have
passed before me, the plea-
sure that I derive to-day
from the works of Sandys,
and the emotion with which
they thrill me now, are as
fresh and as true as in
the days when critical facul-
ties were less keen and
enthusiasms more readily
stimulated.
The lovely study of Tears
and the stately woodcuts If
and The Death of King
Warwulf led me to seek
for other reproductions of
the same man’s work, and
-fortunately the library to
which I then had access
contained the volumes of
“ Once a Week,” in the
pages of which shine such
further masterpieces as The
Old Chartist and Rosa-
mund. To see these was to
wish to possess, and so
began the collection of re-
productions of Sandys’ work
in all genres which is now
one of my treasures, com-
plete as it is in every respect
save that the beautiful wood-
cut of Amor Mundi still
eludes my search.
And then came the red- “mater dolorosa” by Frederick sandys
XXIV. No. 93.—November, 1904.

letter days when in some exhibition there was
to be seen one of his pictures or some examples
of his superb draughtmanship, and the fatigue
and discomfort of the consequent pilgrimage
from the provinces to London were amply
repaid by the delight to be obtained from seeing
the handiwork of the master. Since those youth-
ful days, as may be imagined, one’s outlook
has broadened and one’s taste has become more
fastidious ; but so far as the work of Frederick
Sandys is concerned, disillusion has not yet come.
When the opportunity came to me to write some-
thing about the Preraphaelites, I was!brought into