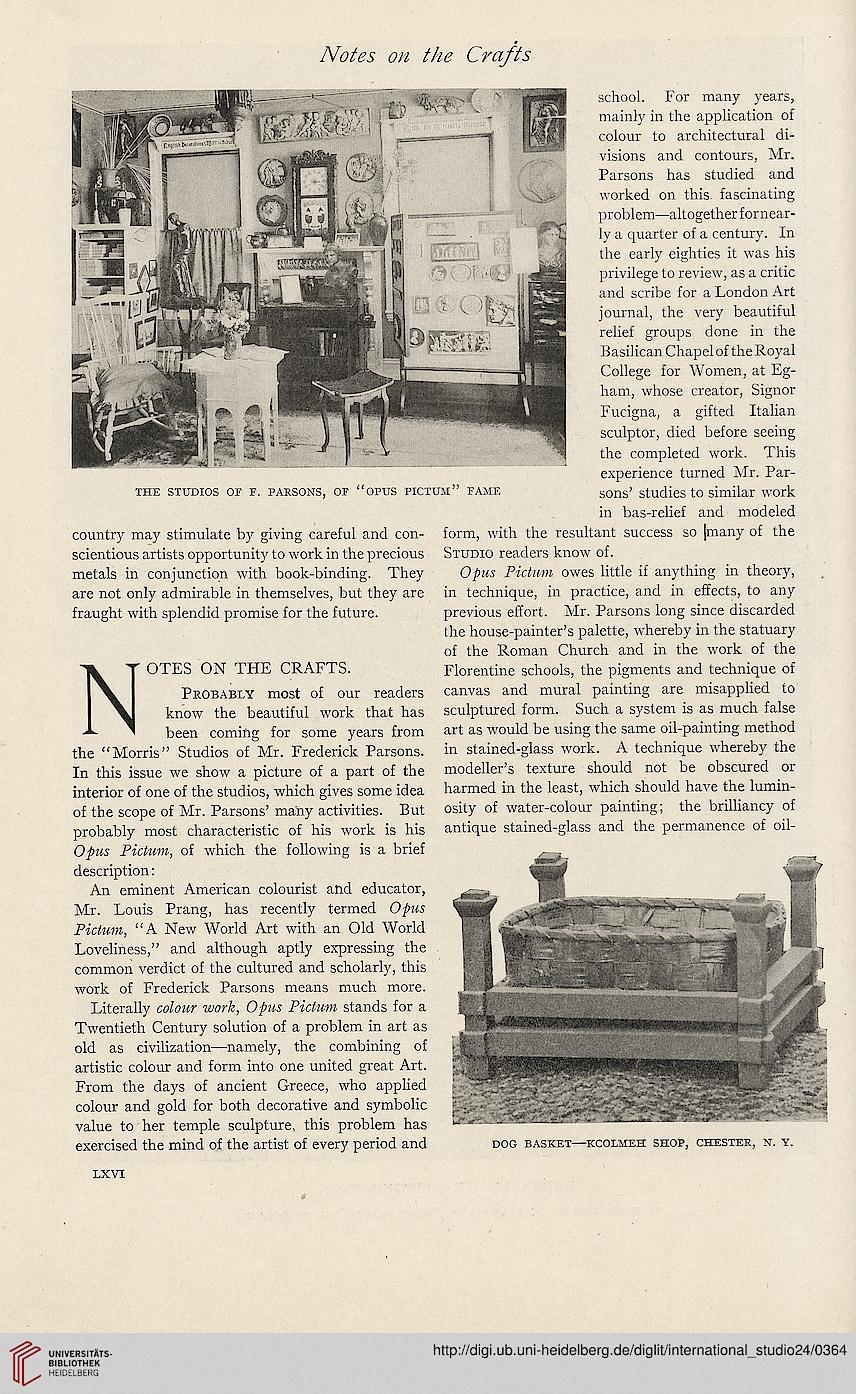 
country may stimulate by giving careful and con-
scientious artists opportunity to work in the precious
metals in conjunction with book-binding. They
are not only admirable in themselves, but they are
fraught with splendid promise for the future.
OTES ON THE CRAFTS.
Probably most of our readers
know the beautiful work that has
been coming for some years from
the “Morris” Studios of Mr. Frederick Parsons.
In this issue we show a picture of a part of the
interior of one of the studios, which gives some idea
of the scope of Mr. Parsons’ many activities. But
probably most characteristic of his work is his
Opus Pictum, of which the following is a brief
description:
An eminent American colourist and educator,
Mr. Louis Prang, has recently termed Opus
Pictum, “A New World Art with an Old World
Loveliness,” and although aptly expressing the
common verdict of the cultured and scholarly, this
work of Frederick Parsons means much more.
Literally colour work, Opus Pictum stands for a
Twentieth Century solution of a problem in art as
old as civilization—namely, the combining of
artistic colour and form into one united great Art.
From the days of ancient Greece, who applied
colour and gold for both decorative and symbolic
value to her temple sculpture, this problem has
exercised the mind of the artist of every period and

school. For many years,
mainly in the application of
colour to architectural di-
visions and contours, Mr.
Parsons has studied and
worked on this fascinating
problem—altogetherfornear-
ly a quarter of a century. In
the early eighties it was his
privilege to review, as a critic
and scribe for a London Art
journal, the very beautiful
relief groups done in the
Basilican Chapel of the Royal
College for Women, at Eg-
ham, whose creator, Signor
Fucigna, a gifted Italian
sculptor, died before seeing
the completed work. This
experience turned Mr. Par-
sons’ studies to similar work
in bas-relief and modeled
form, with the resultant success so |many of the
Studio readers know of.
Opus Pictum owes little if anything in theory,
in technique, in practice, and in effects, to any
previous effort. Mr. Parsons long since discarded
Ihe house-painter’s palette, whereby in the statuary
of the Roman Church and in the work of the
Florentine schools, the pigments and technique of
canvas and mural painting are misapplied to
sculptured form. Such a system is as much false
art as would be using the same oil-painting method
in stained-glass work. A technique whereby the
modeller’s texture should not be obscured or
harmed in the least, which should have the lumin-
osity of water-colour painting; the brilliancy of
antique stained-glass and the permanence of oil-