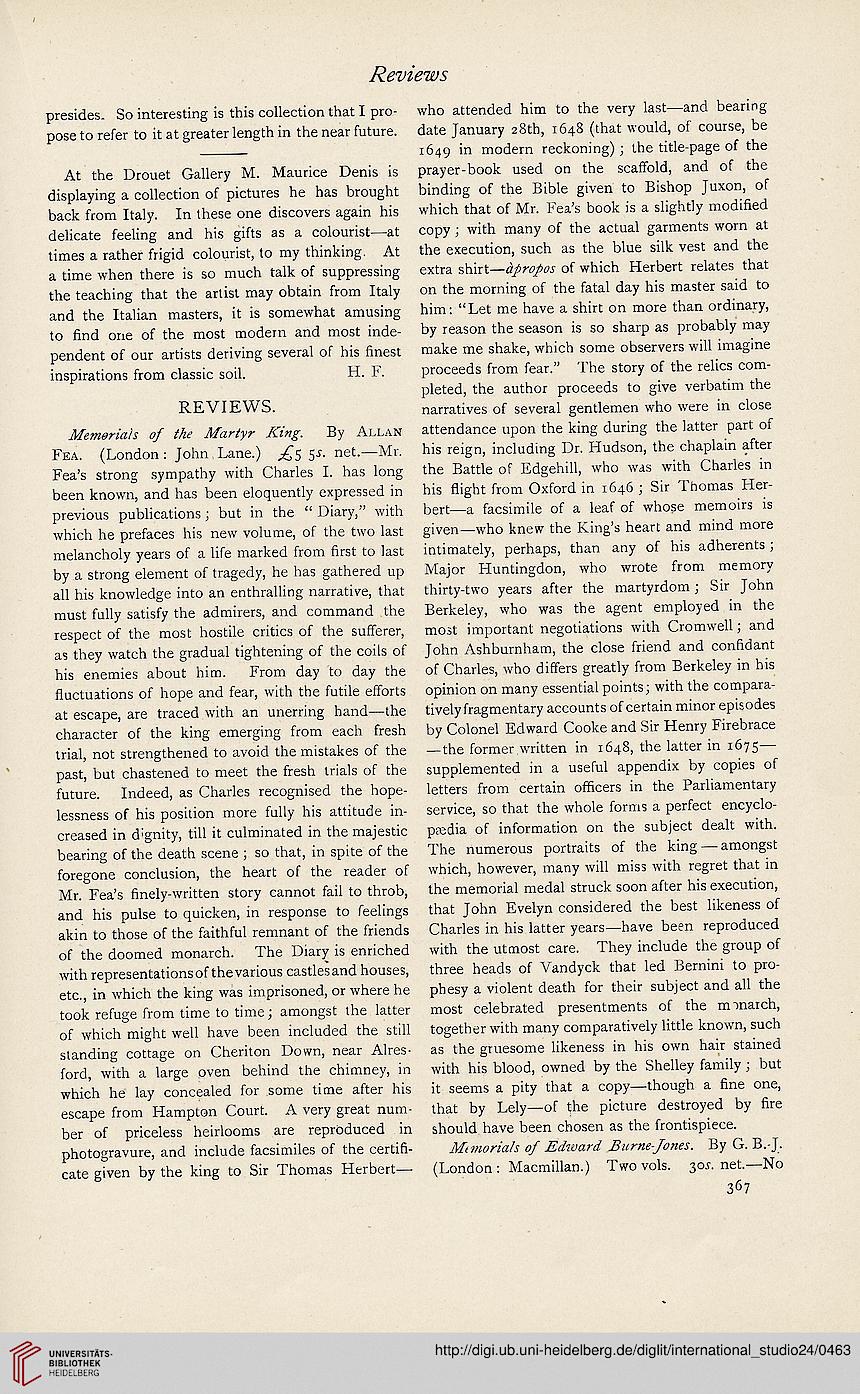 presides. So interesting is this collection that I pro-
pose to refer to it at greater length in the near future.

At the Drouet Gallery M. Maurice Denis is
displaying a collection of pictures he has brought
back from Italy. In these one discovers again his
delicate feeling and his gifts as a colourist—at
times a rather frigid colourist, to my thinking. At
a time when there is so much talk of suppressing
the teaching that the artist may obtain from Italy
and the Italian masters, it is somewhat amusing
to find one of the most modern and most inde-
pendent of our artists deriving several of his finest
inspirations from classic soil. H. F.
REVIEWS.
Memorials of the Martyr King. By Allan
Fea. (London : John Lane.) 5^. net.—Mr.
Fea’s strong sympathy with Charles I. has long
been known, and has been eloquently expressed in
previous publications; but in the “ Diary,” with
which he prefaces his new volume, of the two last
melancholy years of a life marked from first to last
by a strong element of tragedy, he has gathered up
all his knowledge into an enthralling narrative, that
must fully satisfy the admirers, and command the
respect of the most hostile critics of the sufferer,
as they watch the gradual tightening of the coils of
his enemies about him. From day to day the
fluctuations of hope and fear, with the futile efforts
at escape, are traced with an unerring hand—the
character of the king emerging from each fresh
trial, not strengthened to avoid the mistakes of the
past, but chastened to meet the fresh trials of the
future. Indeed, as Charles recognised the hope-
lessness of his position more fully his attitude in-
creased in d’gnity, till it culminated in the majestic
bearing of the death scene ; so that, in spite of the
foregone conclusion, the heart of the reader of
Mr. Fea’s finely-written story cannot fail to throb,
and his pulse to quicken, in response to feelings
akin to those of the faithful remnant of the friends
of the doomed monarch. The Diary is enriched
with representations of thevarious castles and houses,
etc., in which the king was imprisoned, or where he
took refuge from time to time; amongst the latter
of which might well have been included the still
standing cottage on Cheriton Down, near Alres-
ford, with a large oven behind the chimney, in
which he lay concealed for some time after his
escape from Hampton Court. A very great num-
ber of priceless heirlooms are reproduced in
photogravure, and include facsimiles of the certifi-
cate given by the king to Sir Thomas Herbert—

who attended him to the very last—and bearing
date January 28th, 1648 (that would, of course, be
1649 in modern reckoning); the title-page of the
prayer-book used on the scaffold, and of the
binding of the Bible given to Bishop Juxon, of
which that of Mr. Fea’s book is a slightly modified
copy; with many of the actual garments worn at
the execution, such as the blue silk vest and the
extra shirt—apropos of which Herbert relates that
on the morning of the fatal day his master said to
him: “Let me have a shirt on more than ordinary,
by reason the season is so sharp as probably may
make me shake, which some observers will imagine
proceeds from fear.” The story of the relics com-
pleted, the author proceeds to give verbatim the
narratives of several gentlemen who were in close
attendance upon the king during the latter part of
his reign, including Dr. Hudson, the chaplain after
the Battle of Edgehill, who was with Charles in
his flight from Oxford in 1646 ; Sir Thomas Her-
bert—a facsimile of a leaf of whose memoirs is
given—who knew the King’s heart and mind more
intimately, perhaps, than any of his adherents ;
Major Huntingdon, who wrote from memory
thirty-two years after the martyrdom; Sir John
Berkeley, who was the agent employed in the
most important negotiations with Cromwell; and
John Ashburnham, the close friend and confidant
of Charles, who differs greatly from Berkeley in his
opinion on many essential points; with the compara-
tively fragmentary accounts of certain minor episodes
by Colonel Edward Cooke and Sir Henry Firebrace
—the former written in 1648, the latter in 1675—
supplemented in a useful appendix by copies of
letters from certain officers in the Parliamentary
service, so that the whole forms a perfect encyclo-
paedia of information on the subject dealt with.
The numerous portraits of the king—-amongst
which, however, many will miss with regret that in
the memorial medal struck soon after his execution,
that John Evelyn considered the best likeness of
Charles in his latter years—have been reproduced
with the utmost care. They include the group of
three heads of Vandyck that led Bernini to pro-
phesy a violent death for their subject and all the
most celebrated presentments of the m inarch,
together with many comparatively little known, such
as the gruesome likeness in his own hair stained
with his blood, owned by the Shelley family; but
it seems a pity that a copy—though a fine one,
that by Lely—of the picture destroyed by fire
should have been chosen as the frontispiece.
Mtmorials of Edward Burne-fones. By G. B.-J.
(London: Macmillan.) Twovols. 30j-.net.—No
367