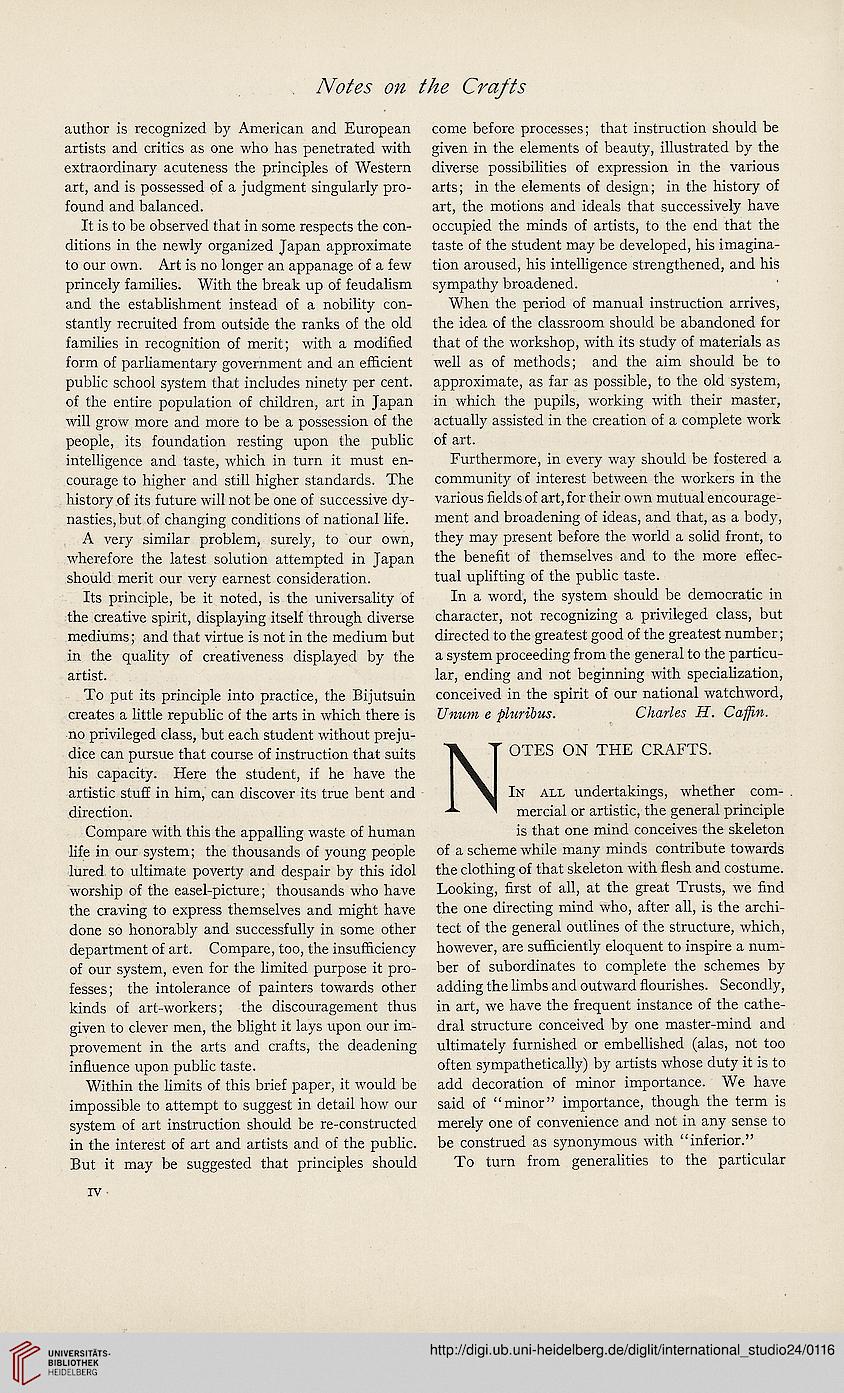 author is recognized by American and European
artists and critics as one who has penetrated with
extraordinary acuteness the principles of Western
art, and is possessed of a judgment singularly pro-
found and balanced.
It is to be observed that in some respects the con-
ditions in the newly organized Japan approximate
to our own. Art is no longer an appanage of a few
princely families. With the break up of feudalism
and the establishment instead of a nobility con-
stantly recruited from outside the ranks of the old
families in recognition of merit; with a modified
form of parliamentary government and an efficient
public school system that includes ninety per cent,
of the entire population of children, art in Japan
will grow more and more to be a possession of the
people, its foundation resting upon the public
intelligence and taste, which in turn it must en-
courage to higher and still higher standards. The
history of its future will not be one of successive dy-
nasties, but of changing conditions of national life.
A very similar problem, surely, to our own,
wherefore the latest solution attempted in Japan
should merit our very earnest consideration.
Its principle, be it noted, is the universality of
the creative spirit, displaying itself through diverse
mediums; and that virtue is not in the medium but
in the quality of creativeness displayed by the
artist.
To put its principle into practice, the Bijutsuin
creates a little republic of the arts in which there is
no privileged class, but each student without preju-
dice can pursue that course of instruction that suits
his capacity. Here the student, if he have the
artistic stuff in him, can discover its true bent and
direction.
Compare with this the appalling waste of human
life in our system; the thousands of young people
lured to ultimate poverty and despair by this idol
worship of the easel-picture; thousands who have
the craving to express themselves and might have
done so honorably and successfully in some other
department of art. Compare, too, the insufficiency
of our system, even for the limited purpose it pro-
fesses; the intolerance of painters towards other
kinds of art-workers; the discouragement thus
given to clever men, the blight it lays upon our im-
provement in the arts and crafts, the deadening
influence upon public taste.
Within the limits of this brief paper, it would be
impossible to attempt to suggest in detail how our
system of art instruction should be re-constructed
in the interest of art and artists and of the public.
But it may be suggested that principles should
rv

come before processes; that instruction should be
given in the elements of beauty, illustrated by the
diverse possibilities of expression in the various
arts; in the elements of design; in the history of
art, the motions and ideals that successively have
occupied the minds of artists, to the end that the
taste of the student may be developed, his imagina-
tion aroused, his intelligence strengthened, and his
sympathy broadened.
When the period of manual instruction arrives,
the idea of the classroom should be abandoned for
that of the workshop, with its study of materials as
well as of methods; and the aim should be to
approximate, as far as possible, to the old system,
in which the pupils, working with their master,
actually assisted in the creation of a complete work
of art.
Furthermore, in every way should be fostered a
community of interest between the workers in the
various fields of art, for their own mutual encourage-
ment and broadening of ideas, and that, as a body,
they may present before the world a solid front, to
the benefit of themselves and to the more effec-
tual uplifting of the public taste.
In a word, the system should be democratic in
character, not recognizing a privileged class, but
directed to the greatest good of the greatest number;
a system proceeding from the general to the particu-
lar, ending and not beginning with specialization,
conceived in the spirit of our national watchword,
Unum e pluribus. Charles H. Cafjin.

Notes on the crafts.
In all undertakings, whether com- .
mercial or artistic, the general principle
is that one mind conceives the skeleton
of a scheme while many minds contribute towards
the clothing of that skeleton with flesh and costume.
Looking, first of all, at the great Trusts, we find
the one directing mind who, after all, is the archi-
tect of the general outlines of the structure, which,
however, are sufficiently eloquent to inspire a num-
ber of subordinates to complete the schemes by
adding the limbs and outward flourishes. Secondly,
in art, we have the frequent instance of the cathe-
dral structure conceived by one master-mind and
ultimately furnished or embellished (alas, not too
often sympathetically) by artists whose duty it is to
add decoration of minor importance. We have
said of “minor” importance, though the term is
merely one of convenience and not in any sense to
be construed as synonymous with “inferior.”
To turn from generalities to the particular