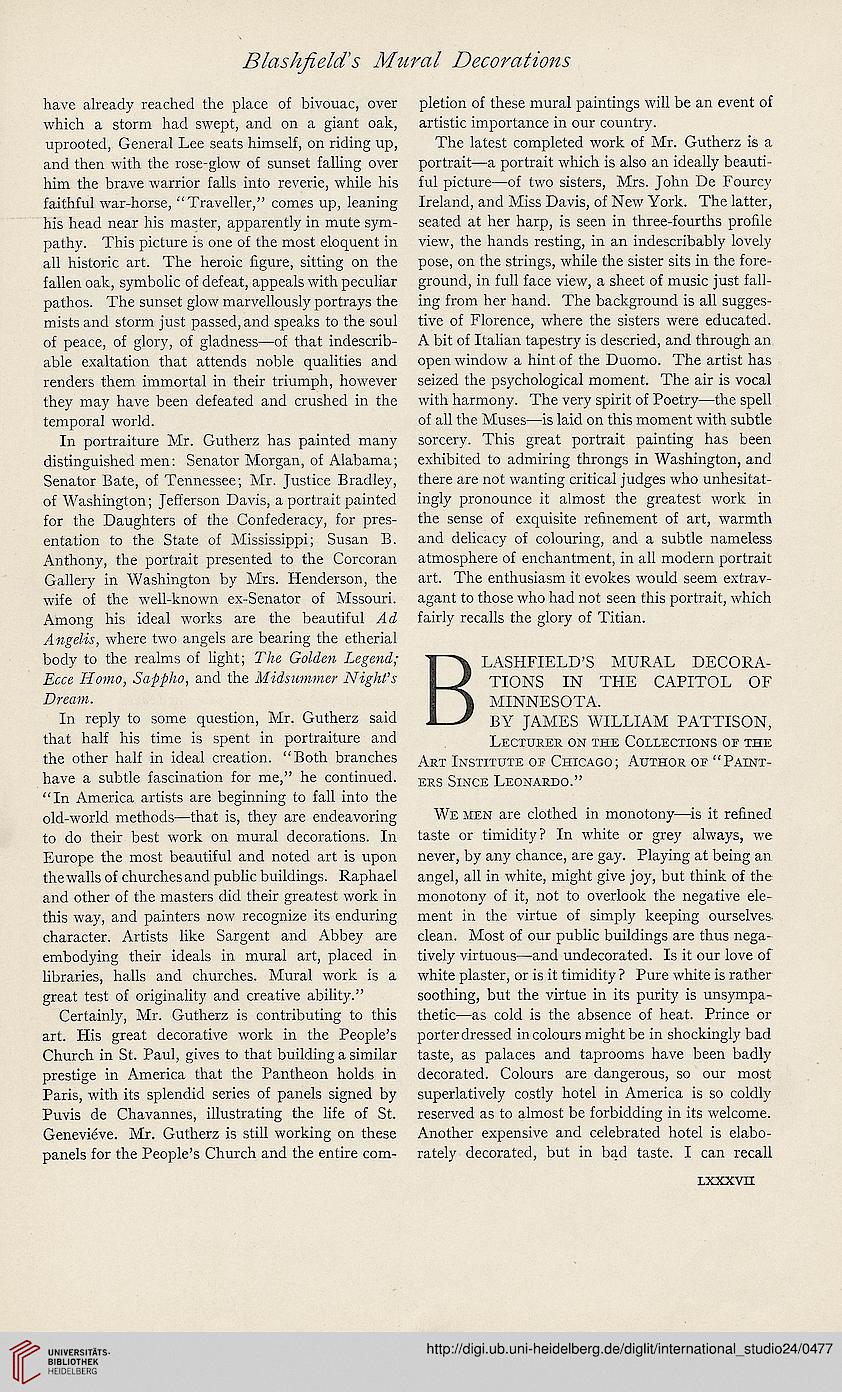 have already reached the place of bivouac, over
which a storm had swept, and on a giant oak,
uprooted, General Lee seats himself, on riding up,
and then with the rose-glow of sunset falling over
him the brave warrior falls into reverie, while his
faithful war-horse, “Traveller,” comes up, leaning
his head near his master, apparently in mute sym-
pathy. This picture is one of the most eloquent in
all historic art. The heroic figure, sitting on the
fallen oak, symbolic of defeat, appeals with peculiar
pathos. The sunset glow marvellously portrays the
mists and storm just passed, and speaks to the soul
of peace, of glory, of gladness—of that indescrib-
able exaltation that attends noble qualities and
renders them immortal in their triumph, however
they may have been defeated and crushed in the
temporal world.
In portraiture Mr. Gutherz has painted many
distinguished men: Senator Morgan, of Alabama;
Senator Bate, of Tennessee; Mr. Justice Bradley,
of Washington; Jefferson Davis, a portrait painted
for the Daughters of the Confederacy, for pres-
entation to the State of Mississippi; Susan B.
Anthony, the portrait presented to the Corcoran
Gallery in Washington by Mrs. Henderson, the
wife of the well-known ex-Senator of Mssouri.
Among his ideal works are the beautiful Ad
Angelis, where two angels are bearing the etherial
body to the realms of light; The Golden Legend;
Ecce Homo, Sappho, and the Midsummer Night’s
Dream.
In reply to some question, Mr. Gutherz said
that half his time is spent in portraiture and
the other half in ideal creation. “Both branches
have a subtle fascination for me,” he continued.
“In America artists are beginning to fall into the
old-world methods—that is, they are endeavoring
to do their best work on mural decorations. In
Europe the most beautiful and noted art is upon
the walls of churches and public buildings. Raphael
and other of the masters did their greatest work in
this way, and painters now recognize its enduring
character. Artists like Sargent and Abbey are
embodying their ideals in mural art, placed in
libraries, halls and churches. Mural work is a
great test of originality and creative ability.”
Certainly, Mr. Gutherz is contributing to this
art. His great decorative work in the People’s
Church in St. Paul, gives to that building a similar
prestige in America that the Pantheon holds in
Paris, with its splendid series of panels signed by
Puvis de Chavannes, illustrating the life of St.
Genevieve. Mr. Gutherz is still working on these
panels for the People’s Church and the entire com-

pletion of these mural paintings will be an event of
artistic importance in our country.
The latest completed work of Mr. Gutherz is a
portrait—a portrait which is also an ideally beauti-
ful picture—of two sisters, Mrs. John De Fourcy
Ireland, and Miss Davis, of New York. The latter,
seated at her harp, is seen in three-fourths profile
view, the hands resting, in an indescribably lovely
pose, on the strings, while the sister sits in the fore-
ground, in full face view, a sheet of music just fall-
ing from her hand. The background is all sugges-
tive of Florence, where the sisters were educated.
A bit of Italian tapestry is descried, and through an
open window a hint of the Duomo. The artist has
seized the psychological moment. The air is vocal
with harmony. The very spirit of Poetry—the spell
of all the Muses—is laid on this moment with subtle
sorcery. This great portrait painting has been
exhibited to admiring throngs in Washington, and
there are not wanting critical judges who unhesitat-
ingly pronounce it almost the greatest work in
the sense of exquisite refinement of art, warmth
and delicacy of colouring, and a subtle nameless
atmosphere of enchantment, in all modern portrait
art. The enthusiasm it evokes would seem extrav-
agant to those who had not seen this portrait, which
fairly recalls the glory of Titian.
LASHFIELD’S MURAL DECORA-
TIONS IN THE CAPITOL OF
MINNESOTA.
BY JAMES WILLIAM PATTISON,
Lecturer on the Collections of the
Art Institute of Chicago; Author of “Paint-
ers Since Leonardo.”
We men are clothed in monotony—is it refined
taste or timidity? In white or grey always, we
never, by any chance, are gay. Playing at being an
angel, all in white, might give joy, but think of the
monotony of it, not to overlook the negative ele-
ment in the virtue of simply keeping ourselves,
clean. Most of our public buildings are thus nega-
tively virtuous—and undecorated. Is it our love of
white plaster, or is it timidity ? Pure white is rather
soothing, but the virtue in its purity is unsympa-
thetic—as cold is the absence of heat. Prince or
porter dressed in colours might be in shockingly bad
taste, as palaces and taprooms have been badly
decorated. Colours are dangerous, so our most
superlatively costly hotel in America is so coldly
reserved as to almost be forbidding in its welcome.
Another expensive and celebrated hotel is elabo-
rately decorated, but in bad taste. I can recall