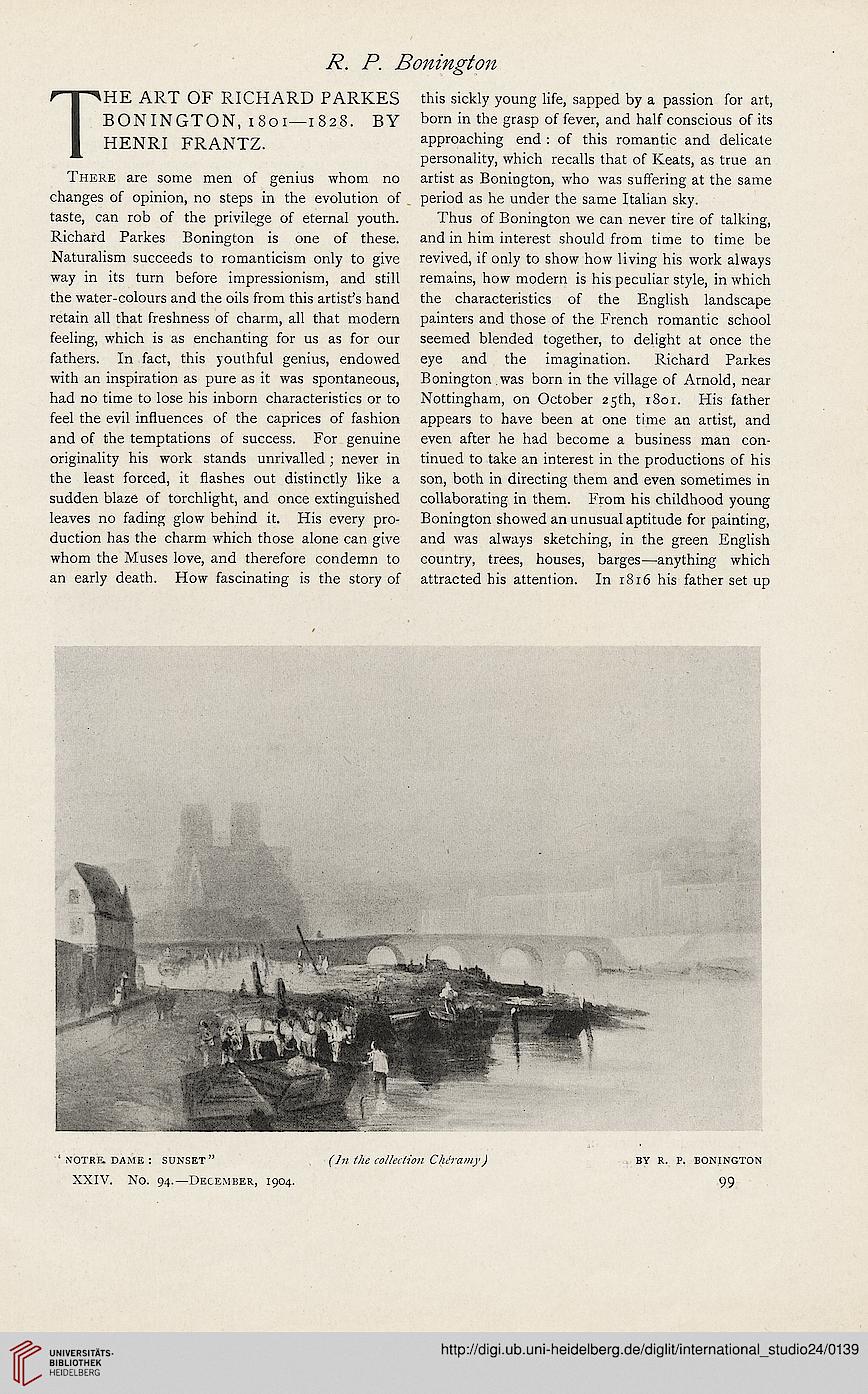 The art of richard parkes
BONINGTON, 1801—1828. BY
HENRI FRANTZ.
There are some men of genius whom no
changes of opinion, no steps in the evolution of
taste, can rob of the privilege of eternal youth.
Richard Parkes Bonington is one of these.
Naturalism succeeds to romanticism only to give
way in its turn before impressionism, and still
the water-colours and the oils from this artist’s hand
retain all that freshness of charm, all that modern
feeling, which is as enchanting for us as for our
fathers. In fact, this youthful genius, endowed
with an inspiration as pure as it was spontaneous,
had no time to lose his inborn characteristics or to
feel the evil influences of the caprices of fashion
and of the temptations of success. For genuine
originality his work stands unrivalled; never in
the least forced, it flashes out distinctly like a
sudden blaze of torchlight, and once extinguished
leaves no fading glow behind it. His every pro-
duction has the charm which those alone can give
whom the Muses love, and therefore condemn to
an early death. How fascinating is the story of

this sickly young life, sapped by a passion for art,
born in the grasp of fever, and half conscious of its
approaching end : of this romantic and delicate
personality, which recalls that of Keats, as true an
artist as Bonington, who was suffering at the same
period as he under the same Italian sky.
Thus of Bonington we can never tire of talking,
and in him interest should from time to time be
revived, if only to show how living his work always
remains, how modem is his peculiar style, in which
the characteristics of the English landscape
painters and those of the French romantic school
seemed blended together, to delight at once the
eye and the imagination. Richard Parkes
Bonington was born in the village of Arnold, near
Nottingham, on October 25th, 1801. His father
appears to have been at one time an artist, and
even after he had become a business man con-
tinued to take an interest in the productions of his
son, both in directing them and even sometimes in
collaborating in them. From his childhood young
Bonington showed an unusual aptitude for painting,
and was always sketching, in the green English
country, trees, houses, barges—anything which
attracted his attention. In 1816 his father set up