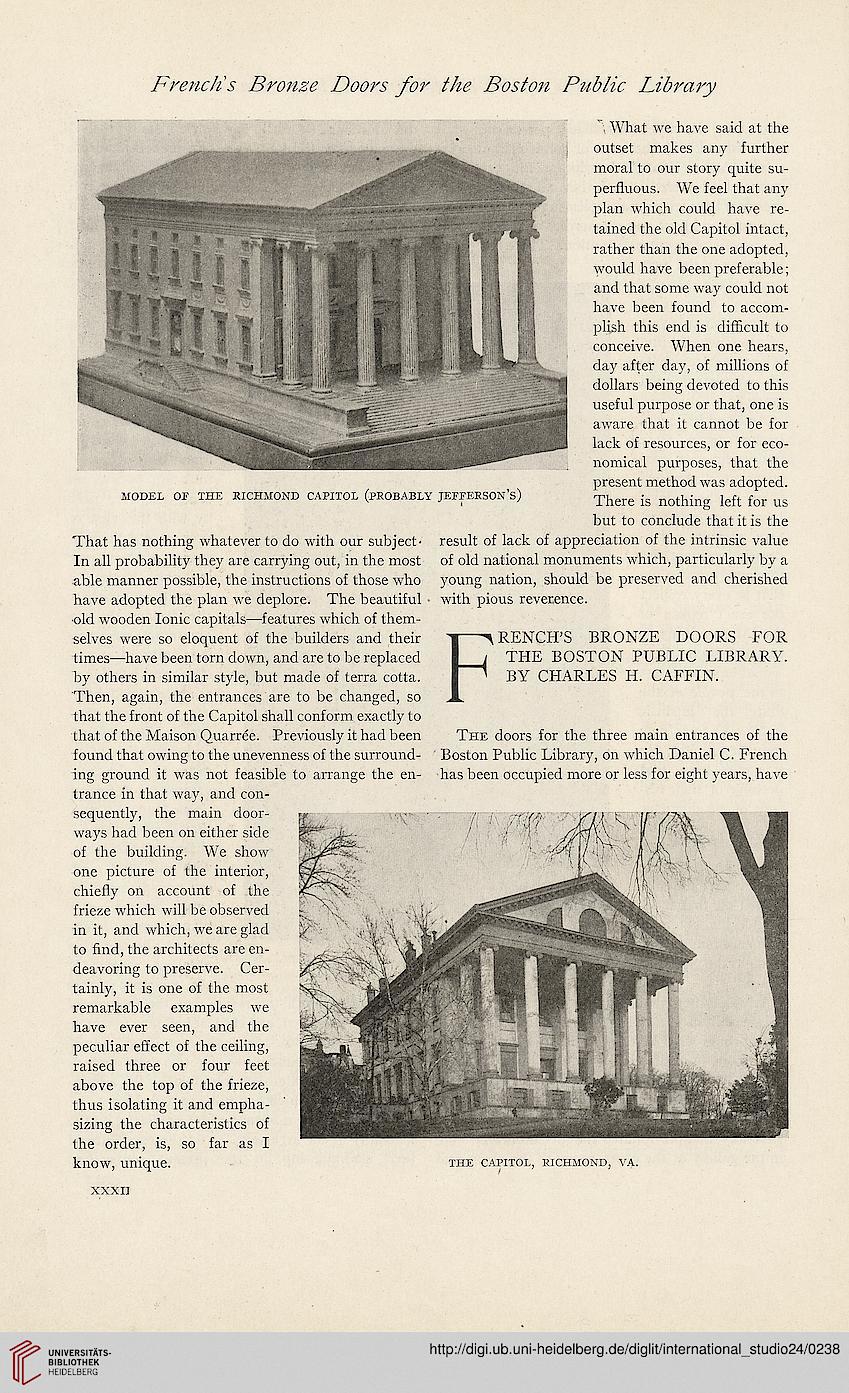 That has nothing whatever to do with our subject-
In all probability they are carrying out, in the most
able manner possible, the instructions of those who
have adopted the plan we deplore. The beautiful
old wooden Ionic capitals—features which of them-
selves were so eloquent of the builders and their
times—have been torn down, and are to be replaced
by others in similar style, but made of terra cotta.
Then, again, the entrances are to be changed, so
that the front of the Capitol shall conform exactly to
that of the Maison Quarree. Previously it had been
found that owing to the unevenness of the surround-
ing ground it was not feasible to arrange the en-
trance in that way, and con-
sequently, the main door-
ways had been on either side
of the building. We show
one picture of the interior,
chiefly on account of the
frieze which will be observed
in it, and which, we are glad
to find, the architects are en-
deavoring to preserve. Cer-
tainly, it is one of the most
remarkable examples we
have ever seen, and the
peculiar effect of the ceiling,
raised three or four feet
above the top of the frieze,
thus isolating it and empha-
sizing the characteristics of

the order, is, so tar as JL
know, unique.

\ What we have said at the
outset makes any further
moral to our story quite su-
perfluous. We feel that any
plan which could have re-
tained the old Capitol intact,
rather than the one adopted,
would have been preferable;
and that some way could not
have been found to accom-
plish this end is difficult to
conceive. When one hears,
day after day, of millions of
dollars being devoted to this
useful purpose or that, one is
aware that it cannot be for
lack of resources, or for eco-
nomical purposes, that the
present method was adopted.
There is nothing left for us
but to conclude that it is the
result of lack of appreciation of the intrinsic value
of old national monuments which, particularly by a
young nation, should be preserved and cherished
with pious reverence.
FRENCH’S BRONZE DOORS FOR
THE BOSTON PUBLIC LIBRARY.
BY CHARLES H. CAFFIN.
The doors for the three main entrances of the
Boston Public Library, on which Daniel C. French
has been occupied more or less for eight years, have