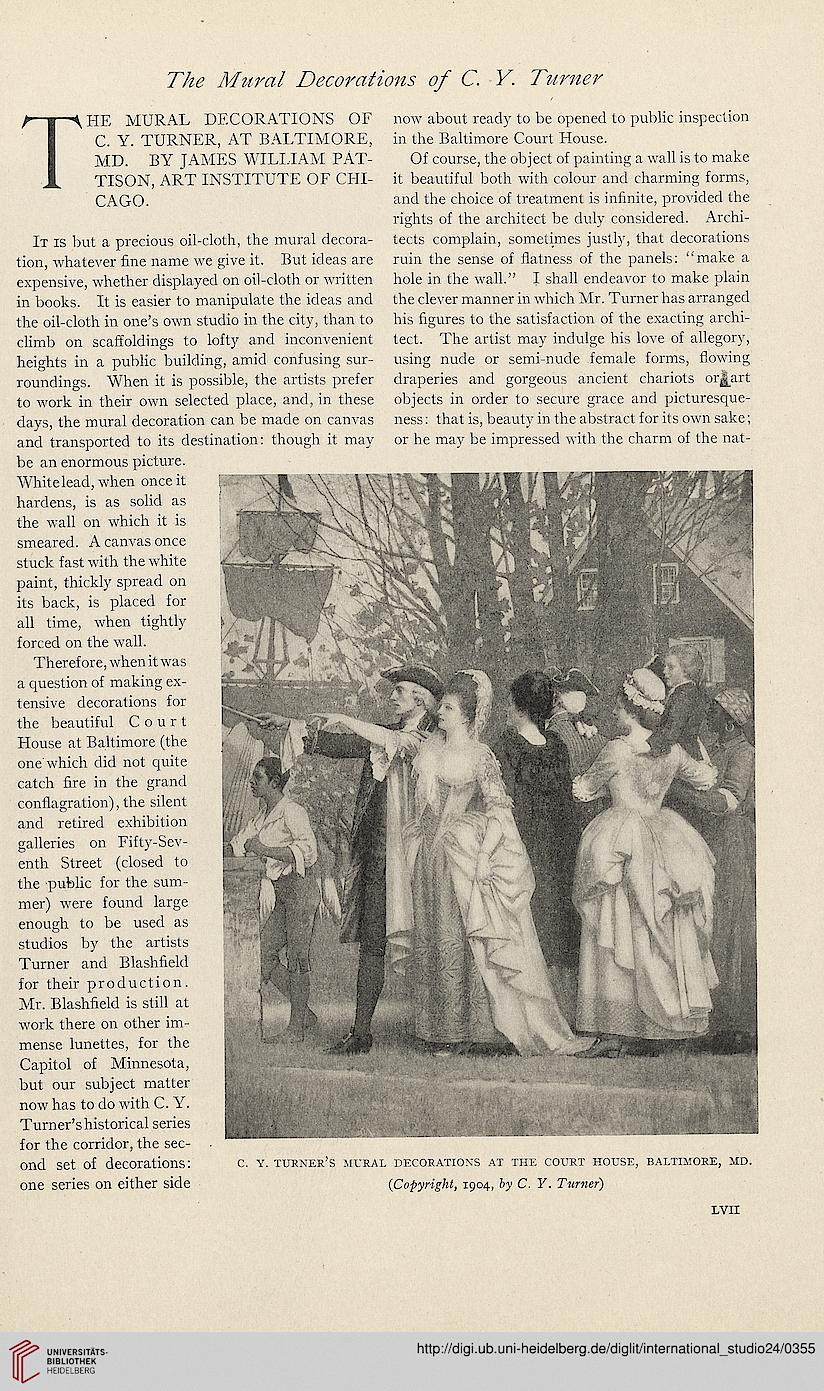 The mural decorations of
C. Y. TURNER, AT BALTIMORE,
MD. BY JAMES WILLIAM PAT-
TISON, ART INSTITUTE OF CHI-
CAGO.
It is but a precious oil-cloth, the mural decora-
tion, whatever fine name we give it. But ideas are
expensive, whether displayed on oil-cloth or written
in books. It is easier to manipulate the ideas and
the oil-cloth in one’s own studio in the city, than to
climb on scaffoldings to lofty and inconvenient
heights in a public building, amid confusing sur-
roundings. When it is possible, the artists prefer
to work in their own selected place, and, in these
days, the mural decoration can be made on canvas
and transported to its destination: though it may
be an enormous picture.
White lead, when once it
hardens, is as solid as
the wall on which it is
smeared. A canvas once
stuck fast with the white
paint, thickly spread on
its back, is placed for
all time, when tightly
forced on the wall.
Therefore, when it was
a question of making ex-
tensive decorations for
the beautiful Court
House at Baltimore (the
one which did not quite
catch fire in the grand
conflagration), the silent
and retired exhibition
galleries on Fifty-Sev-
enth Street (closed to
the public for the sum-
mer) were found large
enough to be used as
studios by the artists
Turner and Blashfield
for their production.
Mr. Blashfield is still at
work there on other im-
mense lunettes, for the
Capitol of Minnesota,
but our subject matter
now has to do with C. Y.
Turner’s historical series
for the corridor, the sec-
ond set of decorations:
one series on either side

now about ready to be opened to public inspection
in the Baltimore Court House.
Of course, the object of painting a wall is to make
it beautiful both with colour and charming forms,
and the choice of treatment is infinite, provided the
rights of the architect be duly considered. Archi-
tects complain, sometimes justly, that decorations
ruin the sense of flatness of the panels: “make a
hole in the wall.” I shall endeavor to make plain
the clever manner in which Mr. Turner has arranged
his figures to the satisfaction of the exacting archi-
tect. The artist may indulge his love of allegory,
using nude or semi-nude female forms, flowing
draperies and gorgeous ancient chariots or^art
objects in order to secure grace and picturesque-
ness : that is, beauty in the abstract for its own sake;
or he may be impressed with the charm of the nat-