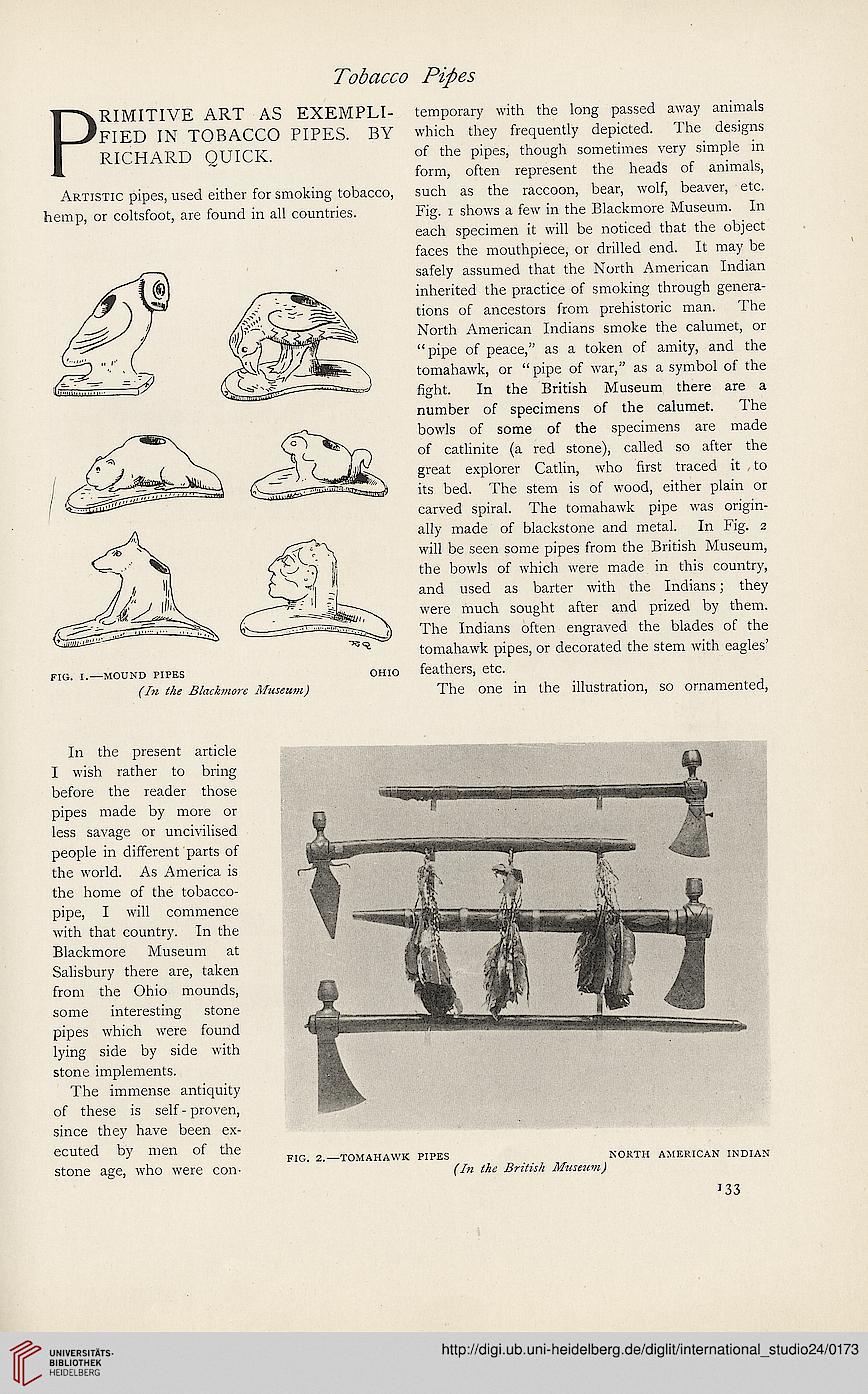 PRIMITIVE ART AS EXEMPLI-
FIED IN TOBACCO PIPES. BY
RICHARD QUICK.
Artistic pipes, used either for smoking tobacco,
hemp, or coltsfoot, are found in all countries.

temporary with the long passed away animals
which they frequently depicted. The designs
of the pipes, though sometimes very simple in
form, often represent the heads of animals,
such as the raccoon, bear, wolf, beaver, etc.
Fig. i shows a few in the Blackmore Museum. In
each specimen it will be noticed that the object
faces the mouthpiece, or drilled end. It may be
safely assumed that the North American Indian
inherited the practice of smoking through genera-
tions of ancestors from prehistoric man. The
North American Indians smoke the calumet, or
“pipe of peace,” as a token of amity, and the
tomahawk, or “ pipe of war,” as a symbol of the
fight. In the British Museum there are a
number of specimens of the calumet. The
bowls of some of the specimens are made
of catlinite (a red stone), called so after the
great explorer Catlin, who first traced it to
its bed. The stem is of wood, either plain or
carved spiral. The tomahawk pipe was origin-
ally made of blackstone and metal. In Fig. 2
will be seen some pipes from the British Museum,
the bowls of which were made in this country,
and used as barter with the Indians; they
were much sought after and prized by them.
The Indians often engraved the blades of the
tomahawk pipes, or decorated the stem with eagles’
feathers, etc.
The one in the illustration, so ornamented,

In the present article
I wish rather to bring
before the reader those
pipes made by more or
less savage or uncivilised
people in different parts of
the world. As America is
the home of the tobacco-
pipe, I will commence
with that country. In the
Blackmore Museum at
Salisbury there are, taken
from the Ohio mounds,
some interesting stone
pipes which were found
lying side by side with
stone implements.
The immense antiquity
of these is self - proven,
since they have been ex-
ecuted by men of the
stone age, who were con-