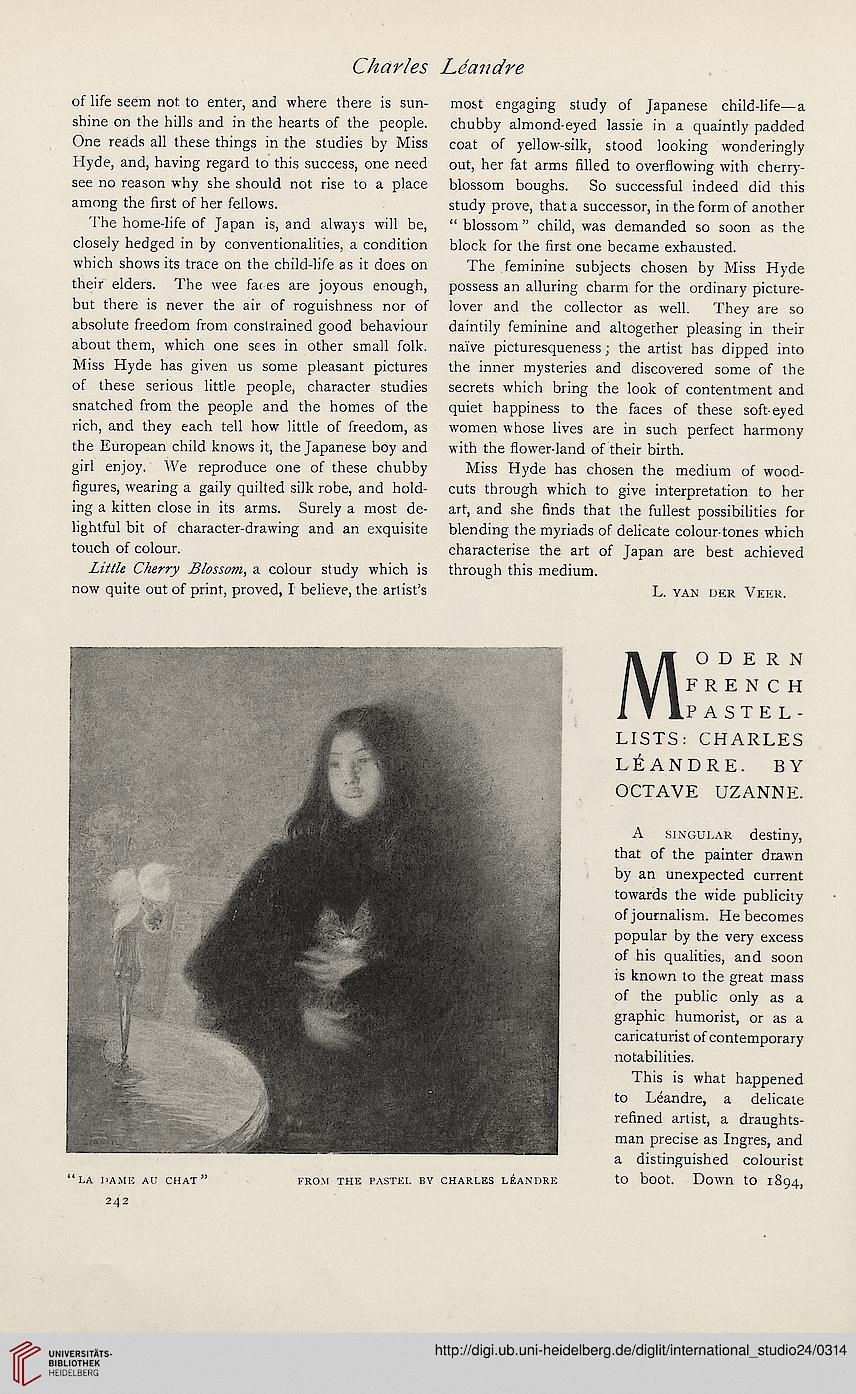 of life seem not to enter, and where there is sun-
shine on the hills and in the hearts of the people.
One reads all these things in the studies by Miss
Hyde, and, having regard to this success, one need
see no reason why she should not rise to a place
among the first of her fellows.
The home-life of Japan is, and always will be,
closely hedged in by conventionalities, a condition
which shows its trace on the child-life as it does on
their elders. The wee fates are joyous enough,
but there is never the air of roguishness nor of
absolute freedom from constrained good behaviour
about them, which one sees in other small folk.
Miss Hyde has given us some pleasant pictures
of these serious little people, character studies
snatched from the people and the homes of the
rich, and they each tell how little of freedom, as
the European child knows it, the Japanese boy and
girl enjoy. We reproduce one of these chubby
figures, wearing a gaily quilted silk robe, and hold-
ing a kitten close in its arms. Surely a most de-
lightful bit of character-drawing and an exquisite
touch of colour.
Little Cherry Blossom, a colour study which is
now quite out of print, proved, I believe, the artist’s

most engaging study of Japanese child-life—a
chubby almond-eyed lassie in a quaintly padded
coat of yellow-silk, stood looking wonderingly
out, her fat arms filled to overflowing with cherry-
blossom boughs. So successful indeed did this
study prove, that a successor, in the form of another
“ blossom ” child, was demanded so soon as the
block for the first one became exhausted.
The feminine subjects chosen by Miss Hyde
possess an alluring charm for the ordinary picture-
lover and the collector as well. They are so
daintily feminine and altogether pleasing in their
naive picturesqueness; the artist has dipped into
the inner mysteries and discovered some of the
secrets which bring the look of contentment and
quiet happiness to the faces of these soft-eyed
women whose lives are in such perfect harmony
with the flower-land of their birth.
Miss Hyde has chosen the medium of wood-
cuts through which to give interpretation to her
art, and she finds that the fullest possibilities for
blending the myriads of delicate colour-tones which
characterise the art of Japan are best achieved
through this medium.
L. yan der Veer.

FROM THE PASTEL BY CHARLES LEANDRE

Modern
FRENCH
PASTEL-
LISTS: CHARLES
LEANDRE. BY
OCTAVE UZANNE.
A singular destiny,
that of the painter drawn
by an unexpected current
towards the wide publicity
of journalism. He becomes
popular by the very excess
of his qualities, and soon
is known to the great mass
of the public only as a
graphic humorist, or as a
caricaturist of contemporary
notabilities.
This is what happened
to Leandre, a delicate
refined artist, a draughts-
man precise as Ingres, and
a distinguished colourist
to boot. Down to 1894,