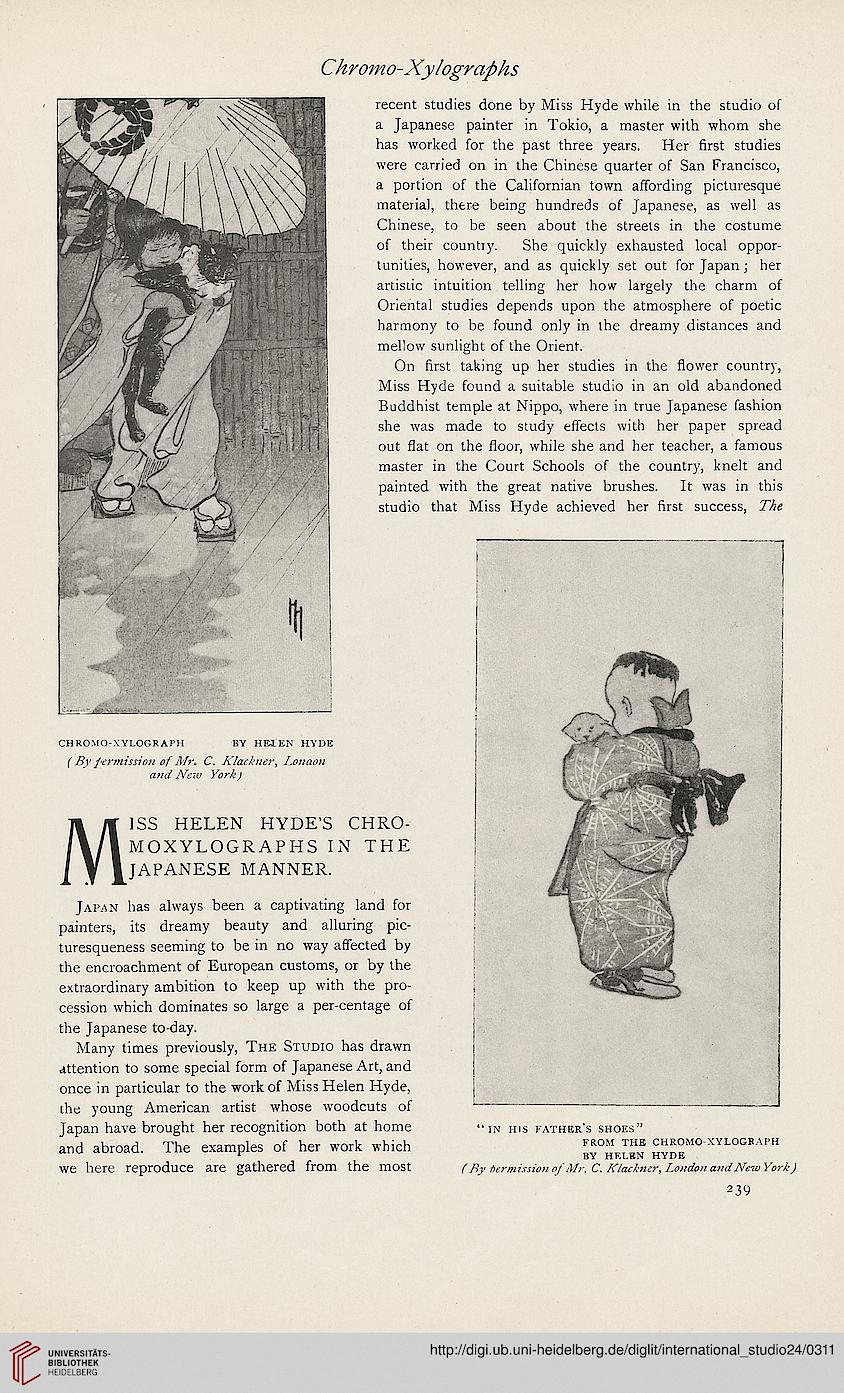 
recent studies done by Miss Hyde while in the studio of
a Japanese painter in Tokio, a master with whom she
has worked for the past three years. Her first studies
were carried on in the Chinese quarter of San Francisco,
a portion of the Californian town affording picturesque
material, there being hundreds of Japanese, as well as
Chinese, to be seen about the streets in the costume
of their country. She quickly exhausted local oppor-
tunities, however, and as quickly set out for Japan; her
artistic intuition telling her how largely the charm of
Oriental studies depends upon the atmosphere of poetic
harmony to be found only in the dreamy distances and
mellow sunlight of the Orient.
On first taking up her studies in the flower country,
Miss Hyde found a suitable studio in an old abandoned
Buddhist temple at Nippo, where in true Japanese fashion
she was made to study effects with her paper spread
out flat on the floor, while she and her teacher, a famous
master in the Court Schools of the country, knelt and
painted with the great native brushes. It was in this
studio that Miss Hyde achieved her first success, The

CHROMO-XYLOGRAPH BY HELEN HYDE
( By permission of Mr* C. Klackner, Lonaon
ami New York )
MISS HELEN HYDE’S CHRO-
MOXYLOGRAPHS IN THE
JAPANESE MANNER.
Japan has always been a captivating land for
painters, its dreamy beauty and alluring pic-
turesqueness seeming to be in no way affected by
the encroachment of European customs, or by the
extraordinary ambition to keep up with the pro-
cession which dominates so large a per-centage of
the Japanese to-day.
Many times previously, The Studio has drawn
attention to some special form of Japanese Art, and
once in particular to the work of Miss Helen Hyde,
the young American artist whose woodcuts of
Japan have brought her recognition both at home
and abroad. The examples of her work which
we here reproduce are gathered from the most

“IN HIS FATHER'S SHOES”
FROM THE CHROMO XYLOGRAPH
BY HF.LKN HYDE
( By her mission of Mr. C. Klackner, London and New York)