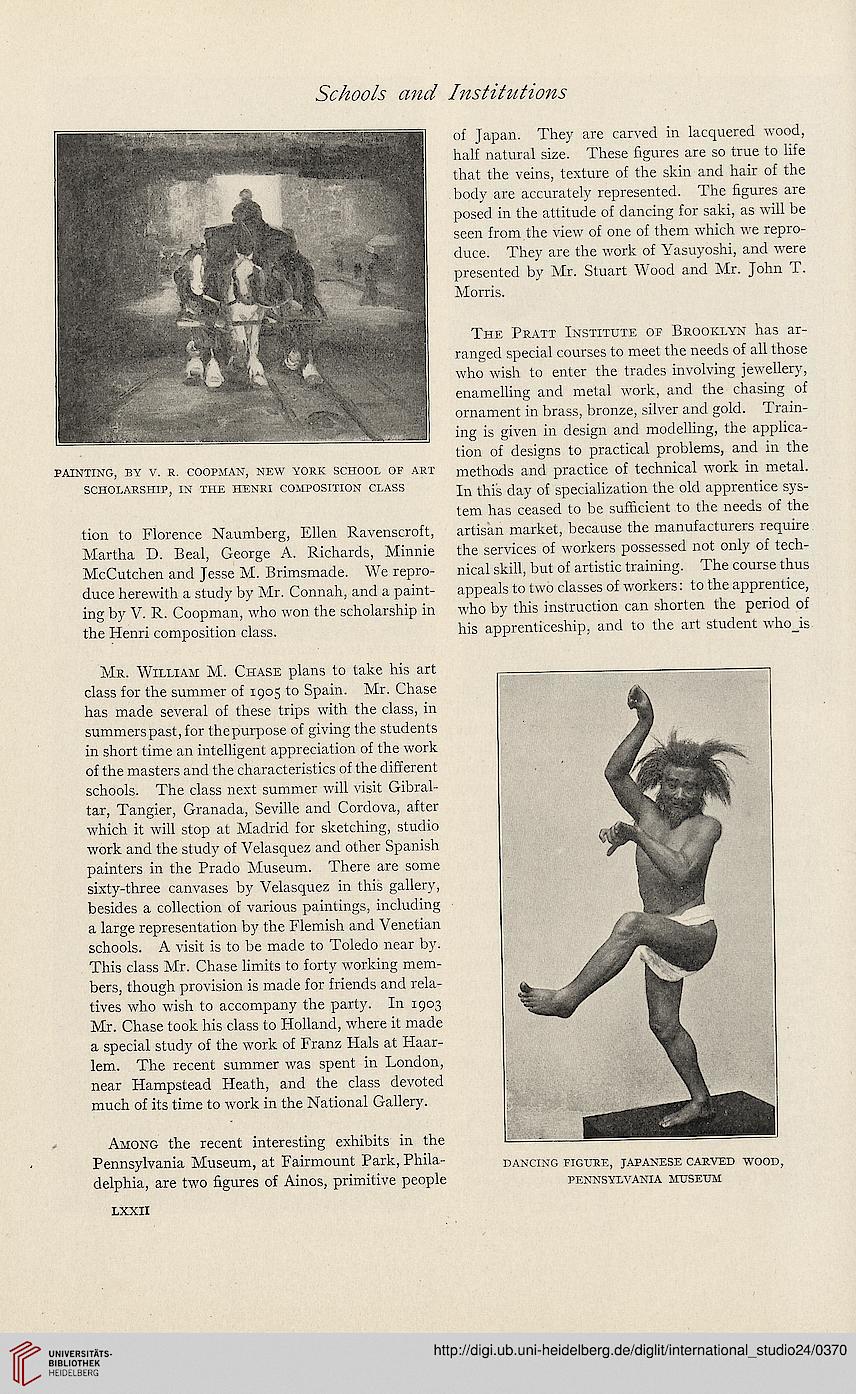 
PAINTING, BY V. R. COOPMAN, NEW YORK SCHOOL OF ART
SCHOLARSHIP, IN THE HENRI COMPOSITION CLASS
tion to Florence Naumberg, Ellen Ravenscroft,
Martha D. Beal, George A. Richards, Minnie
McCutchen and Jesse M. Brimsmade. We repro-
duce herewith a study by Mr. Connah, and a paint-
ing by V. R. Coopman, who won the scholarship in
the Henri composition class.
Mr. William M. Chase plans to take his art
class for the summer of 1905 to Spain. Mr. Chase
has made several of these trips with the class, in
summers past, for thepurpose of giving the students
in short time an intelligent appreciation of the work
of the masters and the characteristics of the different
schools. The class next summer will visit Gibral-
tar, Tangier, Granada, Seville and Cordova, after
which it will stop at Madrid for sketching, studio
work and the study of Velasquez and other Spanish
painters in the Prado Museum. There are some
sixty-three canvases by Velasquez in this gallery,
besides a collection of various paintings, including
a large representation by the Flemish and Venetian
schools. A visit is to be made to Toledo near by.
This class Mr. Chase limits to forty working mem-
bers, though provision is made for friends and rela-
tives who wish to accompany the party. In 1903
Mr. Chase took his class to Holland, where it made
a special study of the work of Franz Hals at Haar-
lem. The recent summer was spent in London,
near Hampstead Heath, and the class devoted
much of its time to work in the National Gallery.
Among the recent interesting exhibits in the
Pennsylvania Museum, at Fairmount Park, Phila-
delphia, are two figures of Ainos, primitive people

of Japan. They are carved in lacquered wood,
half natural size. These figures are so true to life
that the veins, texture of the skin and hair of the
body are accurately represented. The figures are
posed in the attitude of dancing for saki, as will be
seen from the view of one of them which we repro-
duce. They are the work of Yasuyoshi, and were
presented by Mr. Stuart Wood and Mr. John T.
Morris.
The Pratt Institute of Brooklyn has ar-
ranged special courses to meet the needs of all those
who wish to enter the trades involving jewellery,
enamelling and metal work, and the chasing of
ornament in brass, bronze, silver and gold. Train-
ing is given in design and modelling, the applica-
tion of designs to practical problems, and in the
methods and practice of technical work in metal.
In this day of specialization the old apprentice sys-
tem has ceased to be sufficient to the needs of the
artisan market, because the manufacturers require
the services of workers possessed not only of tech-
nical skill, but of artistic training. The course thus
appeals to two classes of workers: to the apprentice,
who by this instruction can shorten the period of
his apprenticeship, and to the art student who^is