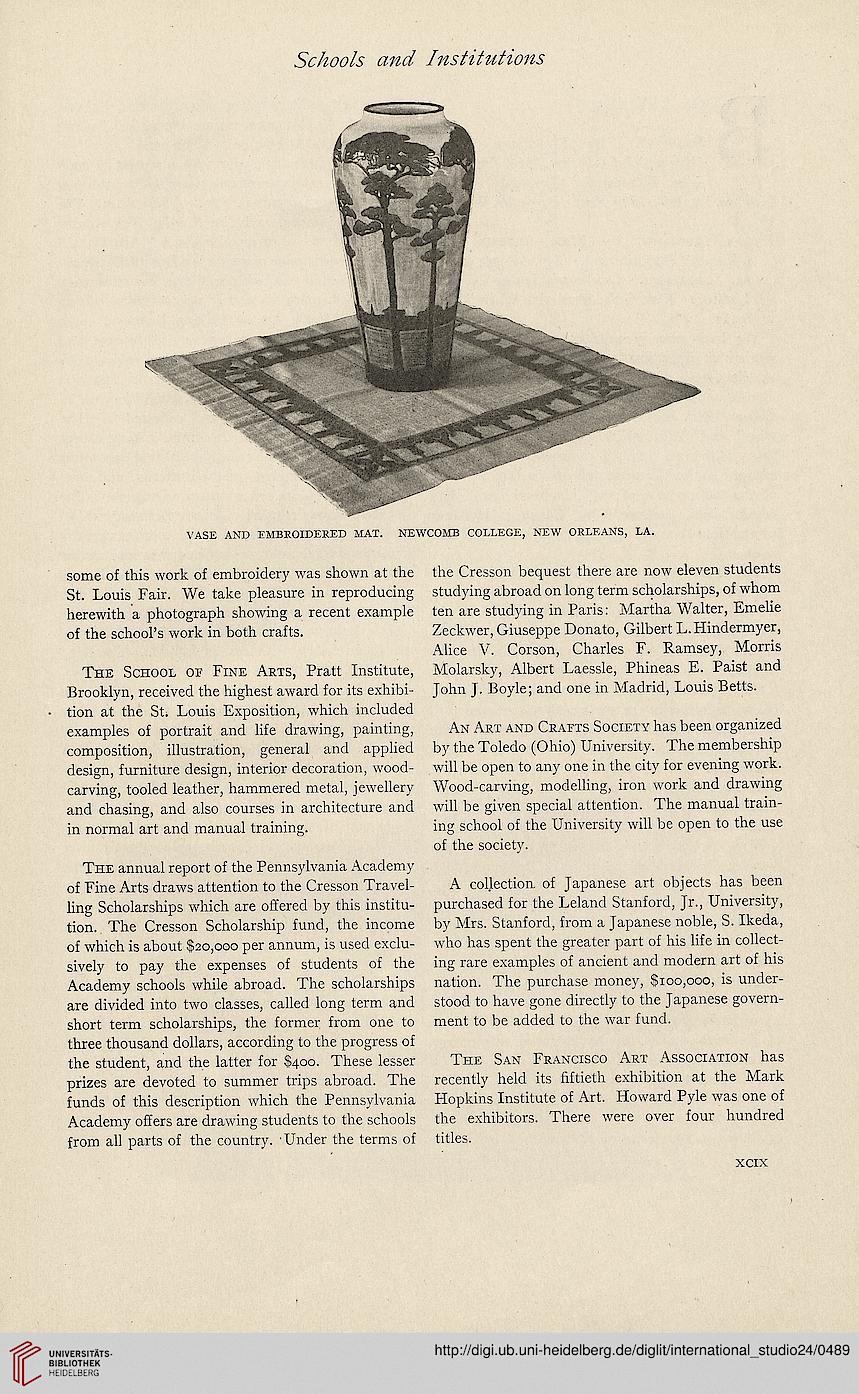 
some of this work of embroidery was shown at the
St. Louis Fair. We take pleasure in reproducing
herewith a photograph showing a recent example
of the school’s work in both crafts.
The School or Fine Arts, Pratt Institute,
Brooklyn, received the highest award for its exhibi-
tion at the St. Louis Exposition, which included
examples of portrait and life drawing, painting,
composition, illustration, general and applied
design, furniture design, interior decoration, wood-
carving, tooled leather, hammered metal, jewellery
and chasing, and also courses in architecture and
in normal art and manual training.
The annual report of the Pennsylvania Academy
of Fine Arts draws attention to the Cresson Travel-
ling Scholarships which are offered by this institu-
tion. The Cresson Scholarship fund, the income
of which is about $20,000 per annum, is used exclu-
sively to pay the expenses of students of the
Academy schools while abroad. The scholarships
are divided into two classes, called long term and
short term scholarships, the former from one to
three thousand dollars, according to the progress of
the student, and the latter for $400. These lesser
prizes are devoted to summer trips abroad. The
funds of this description which the Pennsylvania
Academy offers are drawing students to the schools
from all parts of the country. Under the terms of

the Cresson bequest there are now eleven students
studying abroad on long term scholarships, of whom
ten are studying in Paris: Martha Walter, Emelie
Zeckwer, Giuseppe Donato, Gilbert L.Hindermyer,
Alice V. Corson, Charles F. Ramsey, Morris
Molarsky, Albert Laessle, Phineas E. Paist and
John J. Boyle; and one in Madrid, Louis Betts.
An Art and Crafts Society has been organized
by the Toledo (Ohio) University. The membership
will be open to any one in the city for evening work.
Wood-carving, modelling, iron work and drawing
will be given special attention. The manual train-
ing school of the University will be open to the use
of the society.
A collection of Japanese art objects has been
purchased for the Leland Stanford, Jr., University,
by Mrs. Stanford, from a Japanese noble, S. Ikeda,
who has spent the greater part of his life in collect-
ing rare examples of ancient and modern art of his
nation. The purchase money, $100,000, is under-
stood to have gone directly to the Japanese govern-
ment to be added to the war fund.
The San Francisco Art Association has
recently held its fiftieth exhibition at the Mark
Hopkins Institute of Art. Howard Pyle was one of
the exhibitors. There were over four hundred
titles.