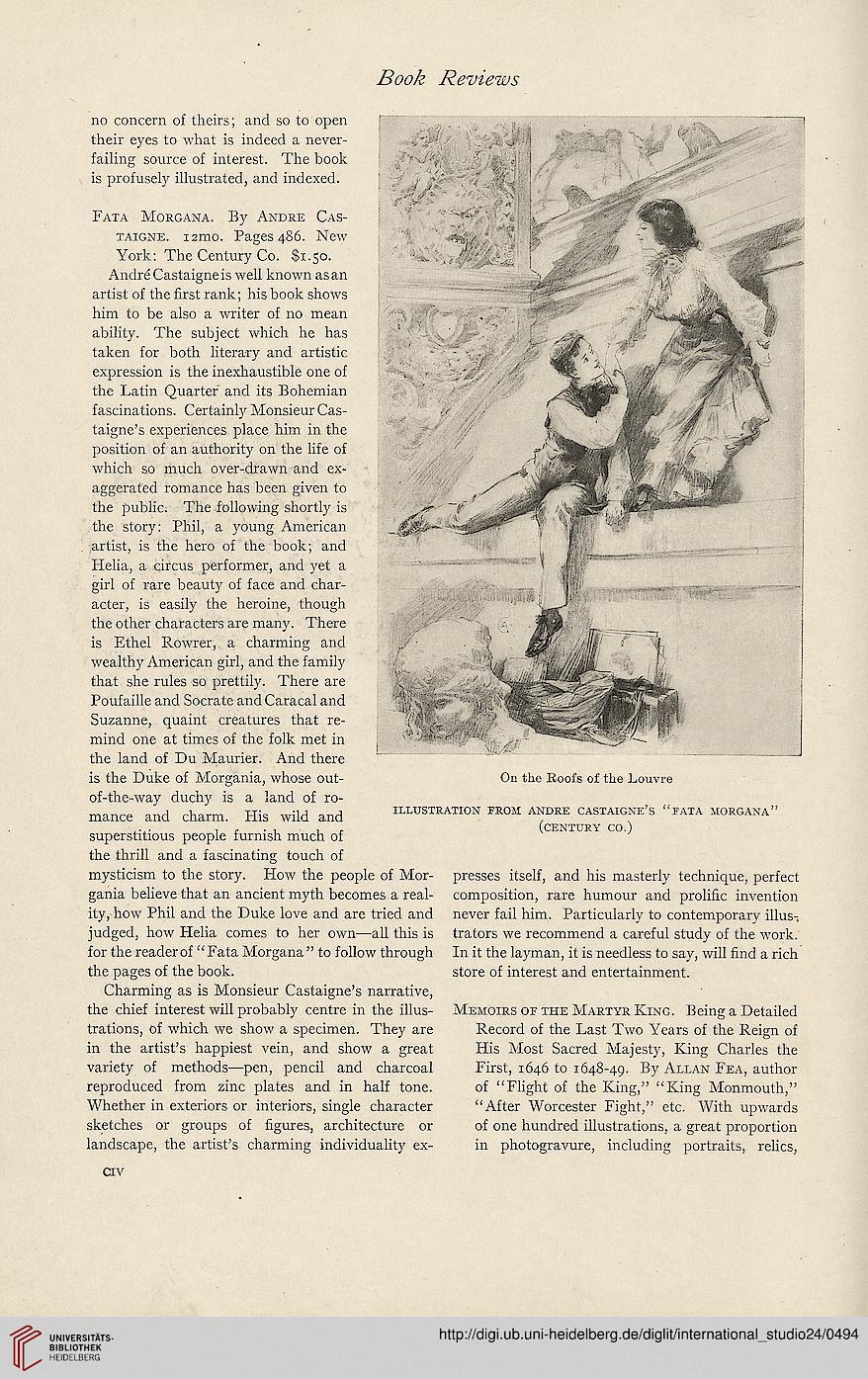 
no concern of theirs; and so to open
their eyes to what is indeed a never-
failing source of interest. The book
is profusely illustrated, and indexed.

Fata Morgana. By Andre Cas-
taigne. i2mo. Pages 486. New
York: The Century Co. $1.50.
Andre Castaigne is well known as an
artist of the first rank; his book shows
him to be also a writer of no mean
ability. The subject which he has
taken for both literary and artistic
expression is the inexhaustible one of
the Latin Quarter and its Bohemian
fascinations. Certainly Monsieur Cas-
taigne’s experiences place him in the
position of an authority on the life of
which so much over-drawn and ex-
aggerated romance has been given to
the public. The following shortly is
the story: Phil, a young American
artist, is the hero of the book; and
Helia, a circus performer, and yet a
girl of rare beauty of face and char-
acter, is easily the heroine, though
the other characters are many. There
is Ethel Rowrer, a charming and
wealthy American girl, and the family
that she rules so prettily. There are
Poufaille and Socrate and Caracal and
Suzanne, quaint creatures that re-
mind one at times of the folk met in
the land of Du Maurier. And there
is the Duke of Morgania, whose out-
of-the-way duchy is a land of ro-
mance and charm. His wild and
superstitious people furnish much of
the thrill and a fascinating touch of
mysticism to the story. How the people of Mor-
gania believe that an ancient myth becomes a real-
ity, how Phil and the Duke love and are tried and
judged, how Helia comes to her own—all this is
for the reader of “Fata Morgana” to follow through
the pages of the book.
Charming as is Monsieur Castaigne’s narrative,
the chief interest will probably centre in the illus-
trations, of which we show a specimen. They are
in the artist’s happiest vein, and show a great
variety of methods—pen, pencil and charcoal
reproduced from zinc plates and in half tone.
Whether in exteriors or interiors, single character
sketches or groups of figures, architecture or
landscape, the artist’s charming individuality ex-

On the Roofs of the Louvre
ILLUSTRATION FROM ANDRE CASTAIGNE’S “FATA MORGANA’
(CENTURY CO.)

presses itself, and his masterly technique, perfect
composition, rare humour and prolific invention
never fail him. Particularly to contemporary illus-
trators we recommend a careful study of the work.
In it the layman, it is needless to say, will find a rich
store of interest and entertainment.
Memoirs of the Martyr King. Being a Detailed
Record of the Last Two Years of the Reign of
His Most Sacred Majesty, King Charles the
First, 1646 to 1648-49. By Allan Fea, author
of “Flight of the King,” “King Monmouth,”
“After Worcester Fight,” etc. With upwards
of one hundred illustrations, a great proportion
in photogravure, including portraits, relics,