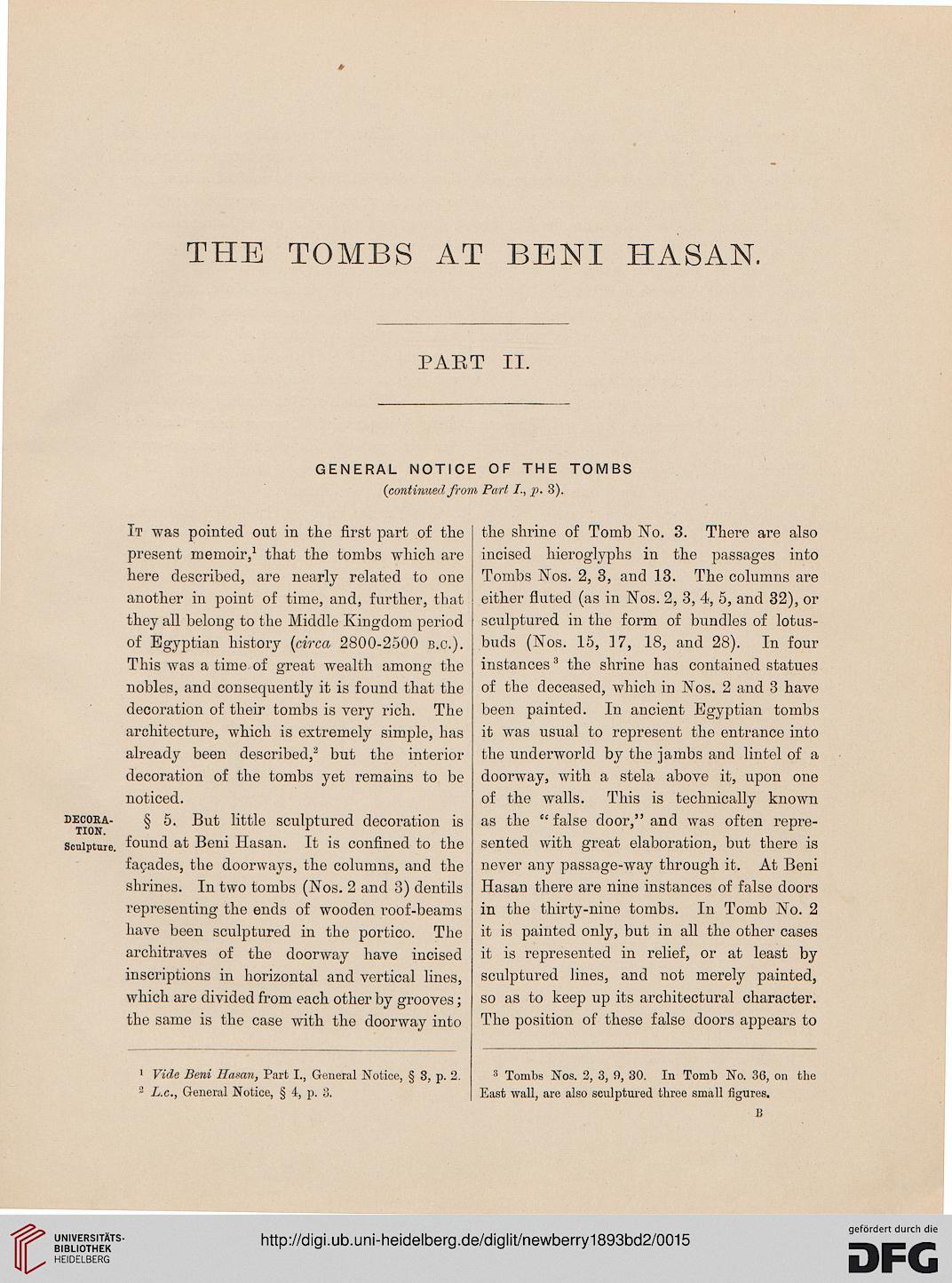 THE TOMBS AT BENI HASAN.

GENERAL NOTICE OF THE TOMBS

It was pointed out in the first part of the
present memoir,1 that the tombs which are
here described, are nearly related to one
another in point of time, and, further, that
they all belong to the Middle Kingdom period
of Egyptian history {circa 2800-2500 b.c.).
This was a time of great wealth among the
nobles, and consequently it is found that the
decoration of their tombs is very rich. The
architecture, which is extremely simple, has
already been described,3 but the interior
decoration of the tombs yet remains to be
noticed.

decoea- § 5. But little sculptured decoration is

sculpture, found at Beni Hasan. It is confined to the
facades, the doorways, the columns, and the
shrines. In two tombs (Nos. 2 and 3) dentils
representing the ends of wooden roof-beams
have been sculptured in the portico. The
architraves of the doorway have incised
inscriptions in horizontal and vertical lines,
which are divided from each other by grooves;
the same is the case with the doorway into

the shrine of Tomb No. 3. There are also
incised hieroglyphs in the passages into
Tombs Nos. 2, 3, and 13. The columns are
either fluted (as in Nos. 2, 3, 4, 5, and 32), or
sculptured in the form of bundles of lotus-
buds (Nos. 15, 17, 18, and 28). In four
instances3 the shrine has contained statues
of the deceased, which in Nos. 2 and 3 have
been painted. In ancient Egyptian tombs
it was usual to represent the entrance into
the underworld by the jambs and lintel of a
doorway, with a stela above it, upon one
of the walls. This is technically known
as the " false door," and was often repre-
sented with great elaboration, but there is
never any passage-way through it. At Beni
Hasan there are nine instances of false doors
in the thirty-nine tombs. In Tomb No. 2
it is painted only, but in all the other cases
it is represented in relief, or at least by
sculptured lines, and not merely painted,
so as to keep up its architectural character.
The position of these false doors appears to