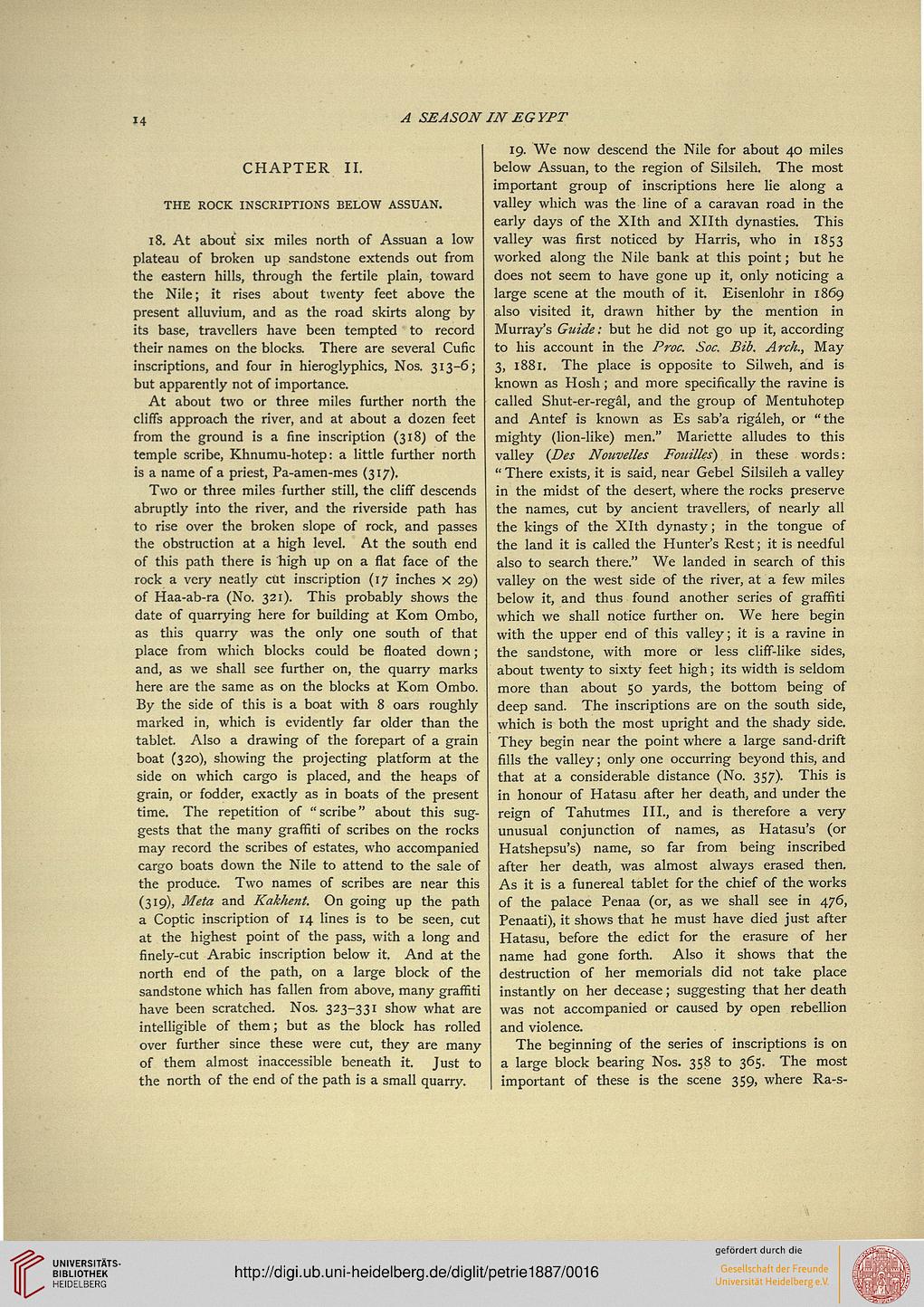 A SEASON IN EGYPT

THE ROCK INSCRIPTIONS BELOW ASSUAN.

18. At about six miles north of Assuan a low-
plateau of broken up sandstone extends out from
the eastern hills, through the fertile plain, toward
the Nile; it rises about twenty feet above the
present alluvium, and as the road skirts along by
its base, travellers have been tempted to record
their names on the blocks. There are several Cufic
inscriptions, and four in hieroglyphics, Nos. 313-6;
but apparently not of importance.

At about two or three miles further north the
cliffs approach the river, and at about a dozen feet
from the ground is a fine inscription (318) of the
temple scribe, Khnumu-hotep: a little further north
is a name of a priest, Pa-amen-mes (317).

Two or three miles further still, the cliff descends
abruptly into the river, and the riverside path has
to rise over the broken slope of rock, and passes
the obstruction at a high level. At the south end
of this path there is high up on a flat face of the
rock a very neatly cut inscription (17 inches X 29)
of Haa-ab-ra (No. 321). This probably shows the
date of quarrying here for building at Kom Ombo,
as this quarry was the only one south of that
place from which blocks could be floated down;
and, as we shall see further on, the quarry marks
here are the same as on the blocks at Kom Ombo.
By the side of this is a boat with 8 oars roughly
marked in, which is evidently far older than the
tablet. Also a drawing of the forepart of a grain
boat (320), showing the projecting platform at the
side on which cargo is placed, and the heaps of
grain, or fodder, exactly as in boats of the present
time. The repetition of "scribe" about this sug-
gests that the many graffiti of scribes on the rocks
may record the scribes of estates, who accompanied
cargo boats down the Nile to attend to the sale of
the produce. Two names of scribes are near this
(319), Meta and Kakhent. On going up the path
a Coptic inscription of 14 lines is to be seen, cut
at the highest point of the pass, with a long and
finely-cut Arabic inscription below it. And at the
north end of the path, on a large block of the
sandstone which has fallen from above, many graffiti
have been scratched. Nos. 323-331 show what are
intelligible of them; but as the block has rolled
over further since these were cut, they are many
of them almost inaccessible beneath it. Just to
the north of the end of the path is a small quarry.

19. We now descend the Nile for about 40 miles
below Assuan, to the region of Silsileh. The most
important group of inscriptions here lie along a
valley which was the line of a caravan road in the
early days of the Xlth and Xllth dynasties. This
valley was first noticed by Harris, who in 1853
worked along the Nile bank at this point; but he
does not seem to have gone up it, only noticing a
large scene at the mouth of it. Eisenlohr in 1869
also visited it, drawn hither by the mention in
Murray's Guide: but he did not go up it, according
to his account in the Proc. Soc. Bib. Arch., May
3, 1881. The place is opposite to Silweh, and is
known as Hosh; and more specifically the ravine is
called Shut-er-regal, and the group of Mentuhotep
and Antef is known as Es sab'a rigaleh, or "the
mighty (lion-like) men." Mariette alludes to this
valley (Des Nouvelles Fouilles). in these words:
" There exists, it is said, near Gebel Silsileh a valley
in the midst of the desert, where the rocks preserve
the names, cut by ancient travellers, of nearly all
the kings of the Xlth dynasty; in the tongue of
the land it is called the Hunter's Rest; it is needful
also to search there." We landed in search of this
valley on the west side of the river, at a few miles
below it, and thus found another series of graffiti
which we shall notice further on. We here begin
with the upper end of this valley; it is a ravine in
the sandstone, with more or less cliff-like sides,
about twenty to sixty feet high; its width is seldom
more than about 50 yards, the bottom being of
deep sand. The inscriptions are on the south side,
which is both the most upright and the shady side.
They begin near the point where a large sand-drift
fills the valley; only one occurring beyond this, and
that at a considerable distance (No. 357). This is
in honour of Hatasu after her death, and under the
reign of Tahutmes III., and is therefore a very
unusual conjunction of names, as Hatasu's (or
Hatshepsu's) name, so far from being inscribed
after her death, was almost always erased then.
As it is a funereal tablet for the chief of the works
of the palace Penaa (or, as we shall see in 476,
Penaati), it shows that he must have died just after
Hatasu, before the edict for the erasure of her
name had gone forth. Also it shows that the
destruction of her memorials did not take place
instantly on her decease; suggesting that her death
was not accompanied or caused by open rebellion
and violence.

The beginning of the series of inscriptions is on
a large block bearing Nos. 358 to 365. The most
important of these is the scene 359, where Ra-s-