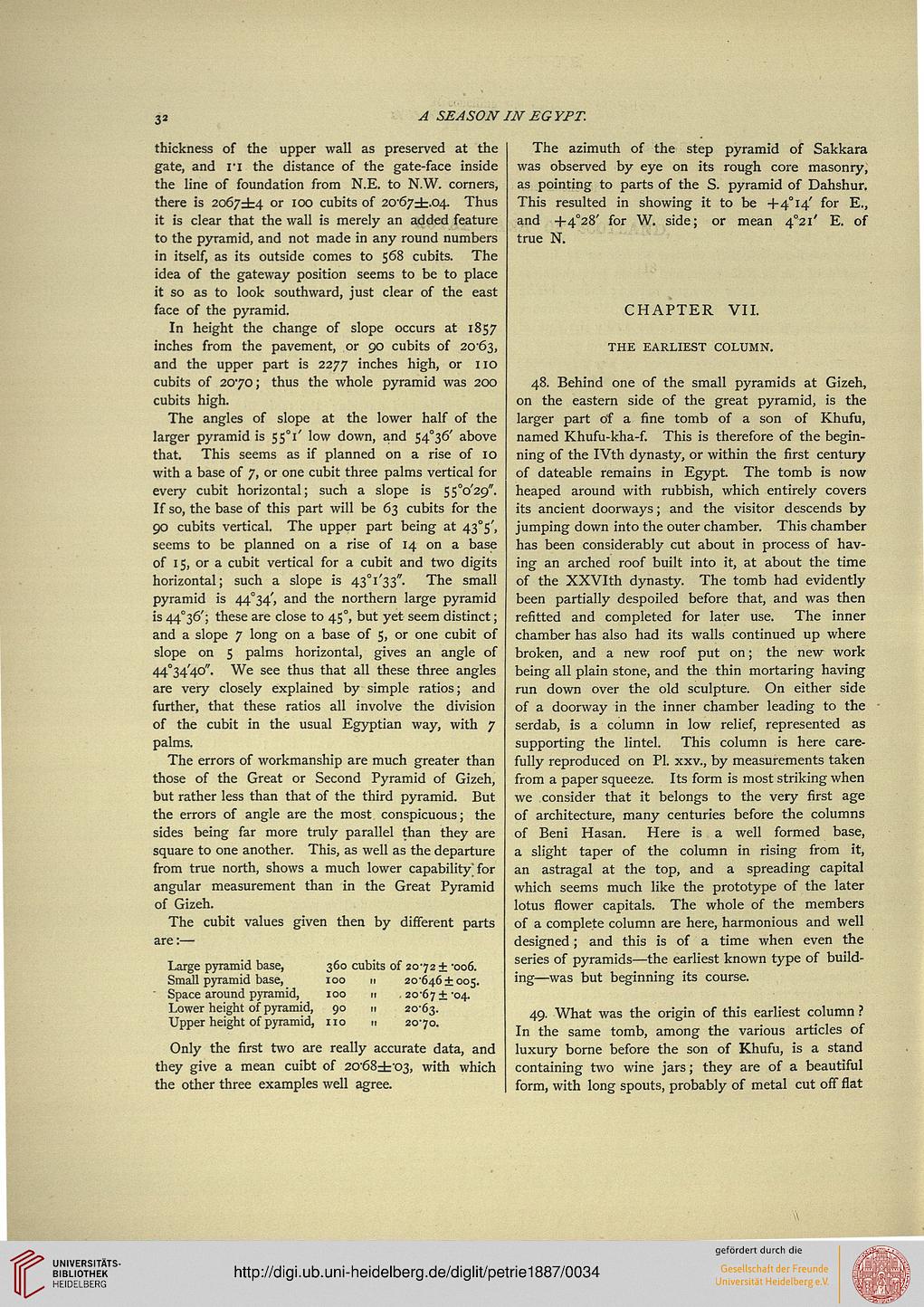 thickness of the upper wall as preserved at the
gate, and ri the distance of the gate-face inside
the line of foundation from N.E. to N.W. corners,
there is 2o67±4 or ioo cubits of 20-67±.04 Thus
it is clear that the wall is merely an added feature
to the pyramid, and not made in any round numbers
in itself, as its outside comes to 568 cubits. The
idea of the gateway position seems to be to place
it so as to look southward, just clear of the east
face of the pyramid.

The angles of slope at the lower half of the
larger pyramid is 55V low down, and S4°36' above
that. This seems as if planned on a rise of 10
with a base of 7, or one cubit three palms vertical for
every cubit horizontal; such a slope is 55°o'29".
If so, the base of this part will be 63 cubits for the
90 cubits vertical. The upper part being at 43°S',
seems to be planned on a rise of 14 on a base
of 15, or a cubit vertical for a cubit and two digits
horizontal; such a slope is 43°i'33". The small
pyramid is 44°34', and the northern large pyramid
is 44°36'; these are close to 450, but yet seem distinct;
and a slope 7 long on a base of 5, or one cubit of
slope on 5 palms horizontal, gives an angle of
44°34'4o". We see thus that all these three angles
are very closely explained by simple ratios; and
further, that these ratios all involve the division
of the cubit in the usual Egyptian way, with 7
palms.

The errors of workmanship are much greater than
those of the Great or Second Pyramid of Gizeh,
but rather less than that of the third pyramid. But
the errors of angle are the most conspicuous; the
sides being far more truly parallel than they are
square to one another. This, as well as the departure
from true north, shows a much lower capability] for
angular measurement than in the Great Pyramid
of Gizeh.

The cubit values given then by different parts
are:—

Only the first two are really accurate data, and
they give a mean cuibt of 20'68±'03, with which
the other three examples well agree.

48. Behind one of the small pyramids at Gizeh,
on the eastern side of the great pyramid, is the
larger part of a fine tomb of a son of Khufu,
named Khufu-kha-f. This is therefore of the begin-
ning of the IVth dynasty, or within the first century
of dateable remains in Egypt. The tomb is now
heaped around with rubbish, which entirely covers
its ancient doorways; and the visitor descends by
jumping down into the outer chamber. This chamber
has been considerably cut about in process of hav-
ing an arched roof built into it, at about the time
of the XXVIth dynasty. The tomb had evidently
been partially despoiled before that, and was then
refitted and completed for later use. The inner
chamber has also had its walls continued up where
broken, and a new roof put on; the new work
being all plain stone, and the thin mortaring having
run down over the old sculpture. On either side
of a doorway in the inner chamber leading to the
serdab, is a column in low relief, represented as
supporting the lintel. This column is here care-
fully reproduced on PI. xxv., by measurements taken
from a paper squeeze. Its form is most striking when
we consider that it belongs to the very first age
of architecture, many centuries before the columns
of Beni Hasan. Here is a well formed base,
a slight taper of the column in rising from it,
an astragal at the top, and a spreading capital
which seems much like the prototype of the later
lotus flower capitals. The whole of the members
of a complete column are here, harmonious and well
designed; and this is of a time when even the
series of pyramids—the earliest known type of build-
ing—was but beginning its course.

49. What was the origin of this earliest column ?
In the same tomb, among the various articles of
luxury borne before the son of Khufu, is a stand
containing two wine jars; they are of a beautiful
form, with long spouts, probably of metal cut off flat