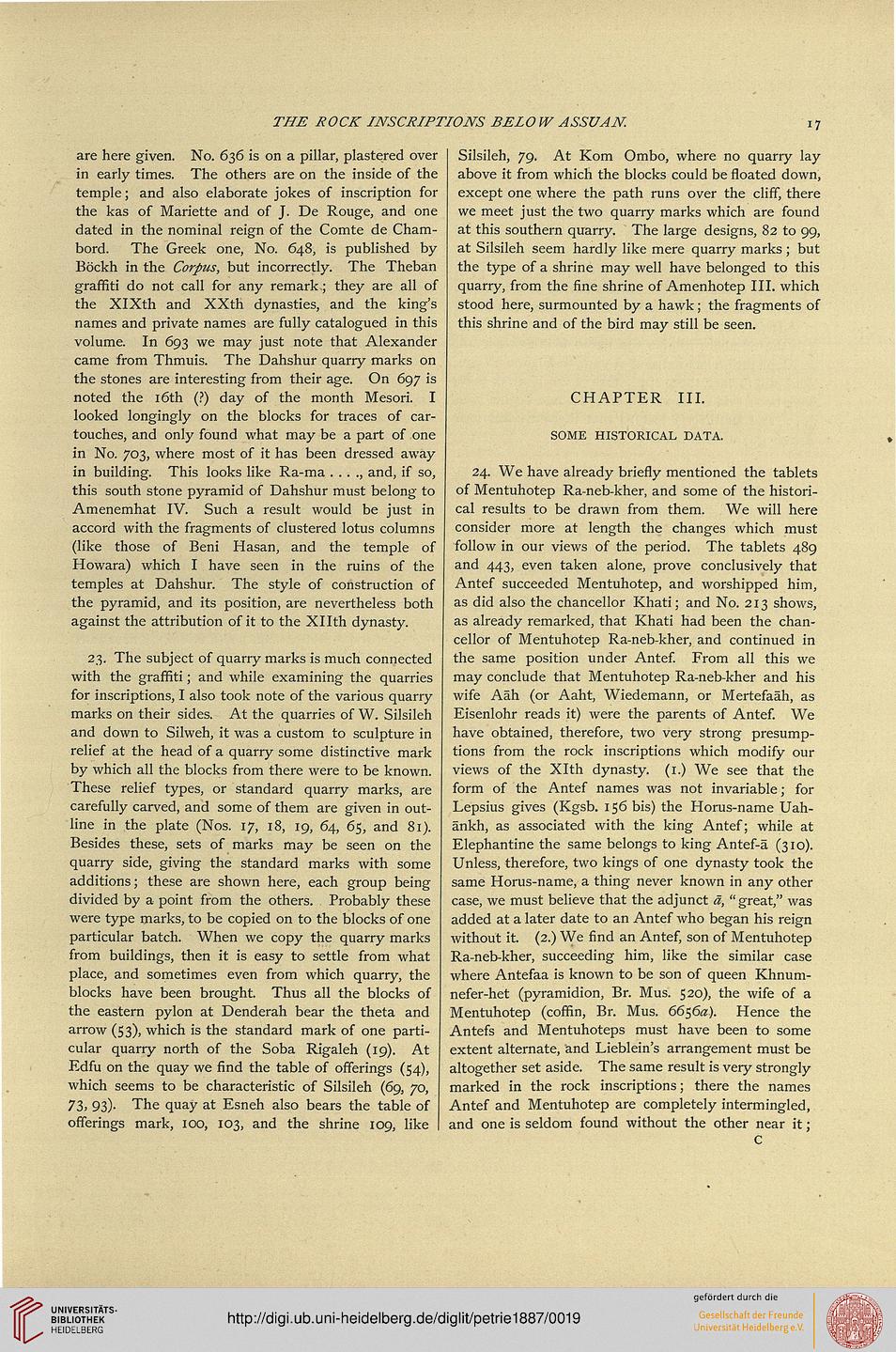 Information about OCR text
THE ROCK INSCRIPTIONS BELOW ASSUAN.

are here given. No. 636 is on a pillar, plastered over
in early times. The others are on the inside of the
temple; and also elaborate jokes of inscription for
the kas of Mariette and of J. De Rouge, and one
dated in the nominal reign of the Comte de Cham-
bord. The Greek one, No. 648, is published by
Bockh in the Corpus, but incorrectly. The Theban
graffiti do not call for any remark.; they are all of
the XlXth and XXth dynasties, and the king's
names and private names are fully catalogued in this
volume. In 693 we may just note that Alexander
came from Thmuis. The Dahshur quarry marks on
the stones are interesting from their age. On 697 is
noted the 16th (?) day of the month Mesori. I
looked longingly on the blocks for traces of car-
touches, and only found what may be a part of one
in No. 703, where most of it has been dressed away
in building. This looks like Ra-ma . .. ., and, if so,
this south stone pyramid of Dahshur must belong to
Amenemhat IV. Such a result would be just in
accord with the fragments of clustered lotus columns
(like those of Beni Hasan, and the temple of
Howara) which I have seen in the ruins of the
temples at Dahshur. The style of construction of
the pyramid, and its position, are nevertheless both
against the attribution of it to the Xllth dynasty.

23. The subject of quarry marks is much connected
with the graffiti; and while examining the quarries
for inscriptions, I also took note of the various quarry
marks on their sides. At the quarries of W. Silsileh
and down to Silweh, it was a custom to sculpture in
relief at the head of a quarry some distinctive mark
by which all the blocks from there were to be known.
These relief types, or standard quarry marks, are
carefully carved, and some of them are given in out-
line in the plate (Nos. 17, 18, 19, 64, 65, and 81).
Besides these, sets of marks may be seen on the
quarry side, giving the standard marks with some
additions; these are shown here, each group being
divided by a point from the others. Probably these
were type marks, to be copied on to the blocks of one
particular batch. When we copy the quarry marks
from buildings, then it is easy to settle from what
place, and sometimes even from which quarry, the
blocks have been brought. Thus all the blocks of
the eastern pylon at Denderah bear the theta and
arrow (53), which is the standard mark of one parti-
cular quarry north of the Soba Rigaleh (19). At
Edfu on the quay we find the table of offerings (54),
which seems to be characteristic of Silsileh (69, 70,
73> 93)- The quay at Esneh also bears the table of
offerings mark, 100, 103, and the shrine 109, like

Silsileh, yg. At Kom Ombo, where no quarry lay
above it from which the blocks could be floated down,
except one where the path runs over the cliff, there
we meet just the two quarry marks which are found
at this southern quarry. The large designs, 82 to 99,
at Silsileh seem hardly like mere quarry marks ; but
the type of a shrine may well have belonged to this
quarry, from the fine shrine of Amenhotep III. which
stood here, surmounted by a hawk; the fragments of
this shrine and of the bird may still be seen.

24. We have already briefly mentioned the tablets
of Mentuhotep Ra-neb-kher, and some of the histori-
cal results to be drawn from them. We will here
consider more at length the changes which must
follow in our views of the period. The tablets 489
and 443, even taken alone, prove conclusively that
Antef succeeded Mentuhotep, and worshipped him,
as did also the chancellor Khati; and No. 213 shows,
as already remarked, that Khati had been the chan-
cellor of Mentuhotep Ra-neb-kher, and continued in
the same position under Antef. From all this we
may conclude that Mentuhotep Ra-neb-kher and his
wife Aah (or Aaht, Wiedemann, or Mertefaah, as
Eisenlohr reads it) were the parents of Antef. We
have obtained, therefore, two very strong presump-
tions from the rock inscriptions which modify our
views of the Xlth dynasty. (1.) We see that the
form of the Antef names was not invariable; for
Lepsius gives (Kgsb. 156 bis) the Horus-name Uah-
ankh, as associated with the king Antef; while at
Elephantine the same belongs to king Antef-a (310).
Unless, therefore, two kings of one dynasty took the
same Horus-name, a thing never known in any other
case, we must believe that the adjunct a, " great," was
added at a later date to an Antef who began his reign
without it. (2.) We find an Antef, son of Mentuhotep
Ra-neb-kher, succeeding him, like the similar case
where Antefaa is known to be son of queen Khnum-
nefer-het (pyramidion, Br. Mus. 520), the wife of a
Mentuhotep (coffin, Br. Mus. 6656a). Hence the
Antefs and Mentuhoteps must have been to some
extent alternate, and Lieblein's arrangement must be
altogether set aside. The same result is very strongly
marked in the rock inscriptions; there the names
Antef and Mentuhotep are completely intermingled,
and one is seldom found without the other near it;