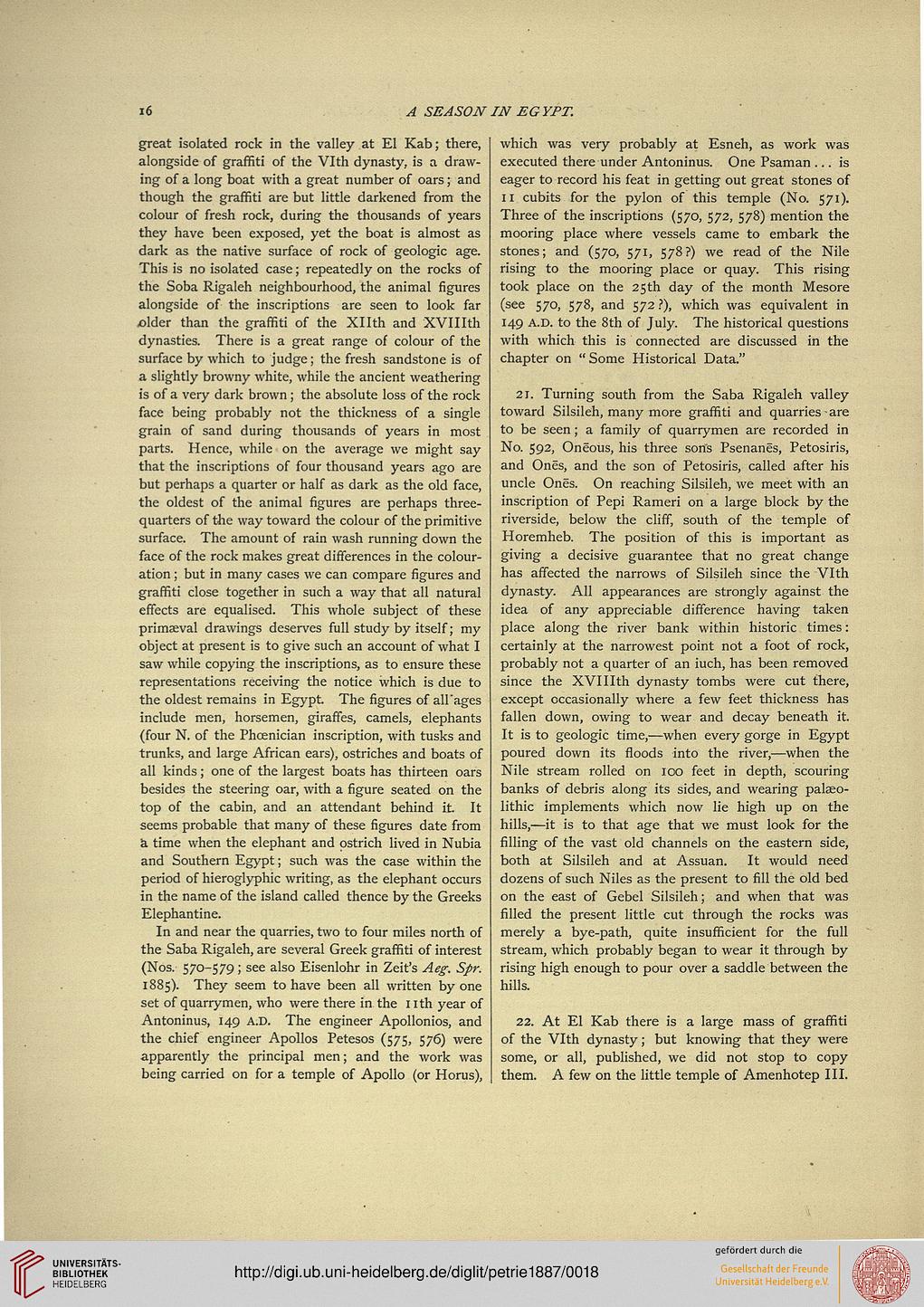 Information about OCR text
i6

A SEASON IN EG YPT.

great isolated rock in the valley at El Kab; there,
alongside of graffiti of the Vlth dynasty, is a draw-
ing of a long boat with a great number of oars; and
though the graffiti are but little darkened from the
colour of fresh rock, during the thousands of years
they have been exposed, yet the boat is almost as
dark as the native surface of rock of geologic age.
This is no isolated case; repeatedly on the rocks of
the Soba Rigaleh neighbourhood, the animal figures
alongside of the inscriptions are seen to look far
alder than the graffiti of the Xllth and XVIIIth
dynasties. There is a great range of colour of the
surface by which to judge; the fresh sandstone is of
a slightly browny white, while the ancient weathering
is of a very dark brown; the absolute loss of the rock
face being probably not the thickness of a single
grain of sand during thousands of years in most
parts. Hence, while on the average we might say
that the inscriptions of four thousand years ago are
but perhaps a quarter or half as dark as the old face,
the oldest of the animal figures are perhaps three-
quarters of the way toward the colour of the primitive
surface. The amount of rain wash running down the
face of the rock makes great differences in the colour-
ation ; but in many cases we can compare figures and
graffiti close together in such a way that all natural
effects are equalised. This whole subject of these
primaeval drawings deserves full study by itself; my
object at present is to give such an account of what I
saw while copying the inscriptions, as to ensure these
representations receiving the notice which is due to
the oldest remains in Egypt. The figures of all'ages
include men, horsemen, giraffes, camels, elephants
(four N. of the Phoenician inscription, with tusks and
trunks, and large African ears), ostriches and boats of
all kinds; one of the largest boats has thirteen oars
besides the steering oar, with a figure seated on the
top of the cabin, and an attendant behind it. It
seems probable that many of these figures date from
a time when the elephant and ostrich lived in Nubia
and Southern Egypt; such was the case within the
period of hieroglyphic writing, as the elephant occurs
in the name of the island called thence by the Greeks
Elephantine.

In and near the quarries, two to four miles north of
the Saba Rigaleh, are several Greek graffiti of interest
(Nos. S70-579; see also Eisenlohr in Zeit's Aeg. Spr.
1885). They seem to have been all written by one
set of quarrymen, who were there in the nth year of
Antoninus, 149 A.D. The engineer Apollonios, and
the chief engineer Apollos Petesos (575, 576) were
apparently the principal men; and the work was
being carried on for a temple of Apollo (or Horus),

which was very probably at Esneh, as work was
executed there under Antoninus. One Psaman ... is
eager to record his feat in getting out great stones of
n cubits for the pylon of this temple (No. 571).
Three of the inscriptions (570, 572, 578) mention the
mooring place where vessels came to embark the
stones; and (570, 571, 578?) we read of the Nile
rising to the mooring place or quay. This rising
took place on the 25th day of the month Mesore
(see 570, 578, and 572 ?), which was equivalent in
149 A.D. to the 8th of July. The historical questions
with which this is connected are discussed in the
chapter on "Some Historical Data."

21. Turning south from the Saba Rigaleh valley
toward Silsileh, many more graffiti and quarries-are
to be seen; a family of quarrymen are recorded in
No. 592, Oneous, his three son's Psenanes, Petosiris,
and Ones, and the son of Petosiris, called after his
uncle Ones. On reaching Silsileh, we meet with an
inscription of Pepi Rameri on a large block by the
riverside, below the cliff, south of the temple of
Horemheb. The position of this is important as
giving a decisive guarantee that no great change
has affected the narrows of Silsileh since the Vlth
dynasty. All appearances are strongly against the
idea of any appreciable difference having taken
place along the river bank within historic times:
certainly at the narrowest point not a foot of rock,
probably not a quarter of an iuch, has been removed
since the XVIIIth dynasty tombs were cut there,
except occasionally where a few feet thickness has
fallen down, owing to wear and decay beneath it.
It is to geologic time,—when every gorge in Egypt
poured down its floods into the river,—when the
Nile stream rolled on 100 feet in depth, scouring
banks of debris along its sides, and wearing palaeo-
lithic implements which now lie high up on the
hills,—it is to that age that we must look for the
filling of the vast old channels on the eastern side,
both at Silsileh and at Assuan. It would need
dozens of such Niles as the present to fill the old bed
on the east of Gebel Silsileh; and when that was
filled the present little cut through the rocks was
merely a bye-path, quite insufficient for the full
stream, which probably began to wear it through by
rising high enough to pour over a saddle between the
hills.

22. At El Kab there is a large mass of graffiti
of the Vlth dynasty; but knowing that they were
some, or all, published, we did not stop to copy
them. A few on the little temple of Amenhotep III.