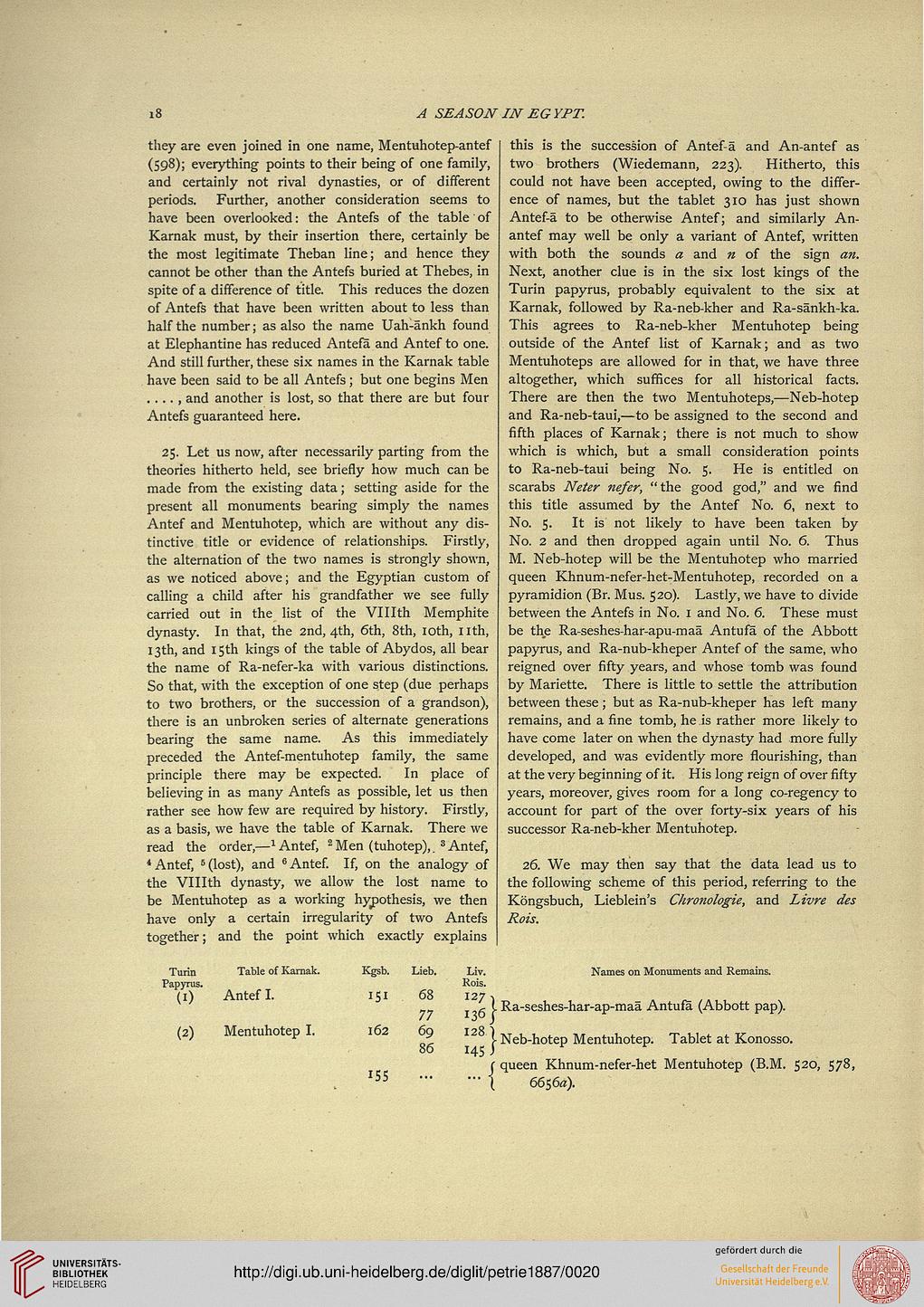 they are even joined in one name, Mentuhotep-antef
(598); everything points to their being of one family,
and certainly not rival dynasties, or of different
periods. Further, another consideration seems to
have been overlooked: the Antefs of the table of
Karnak must, by their insertion there, certainly be
the most legitimate Theban line; and hence they
cannot be other than the Antefs buried at Thebes, in
spite of a difference of title. This reduces the dozen
of Antefs that have been written about to less than
half the number; as also the name Uah:ankh found
at Elephantine has reduced Antefa and Antef to one.
And still further, these six names in the Karnak table
have been said to be all Antefs; but one begins Men

.....and another is lost, so that there are but four

25. Let us now, after necessarily parting from the
theories hitherto held, see briefly how much can be
made from the existing data; setting aside for the
present all monuments bearing simply the names
Antef and Mentuhotep, which are without any dis-
tinctive title or evidence of relationships. Firstly,
the alternation of the two names is strongly shown,
as we noticed above; and the Egyptian custom of
calling a child after his grandfather we see fully
carried out in the list of the VHIth Memphite
dynasty. In that, the 2nd, 4th, 6th, 8th, 10th, nth,
13th, and 15 th kings of the table of Abydos, all bear
the name of Ra-nefer-ka with various distinctions.
So that, with the exception of one step (due perhaps
to two brothers, or the succession of a grandson),
there is an unbroken series of alternate generations
bearing the same name. As this immediately
preceded the Antef-mentuhotep family, the same
principle there may be expected. In place of
believing in as many Antefs as possible, let us then
rather see how few are required by history. Firstly,
as a basis, we have the table of Karnak. There we
read the order,—x Antef, 2 Men (tuhotep),. 3 Antef,
4 Antef, 6 (lost), and 6 Antef. If, on the analogy of
the VHIth dynasty, we allow the lost name to
be Mentuhotep as a working hypothesis, we then
have only a certain irregularity of two Antefs
together; and the point which exactly explains

this is the succession of Antefa and An-antef as
two brothers (Wiedemann, 223). Hitherto, this
could not have been accepted, owing to the differ-
ence of names, but the tablet 310 has just shown
Antef-a to be otherwise Antef; and similarly An-
antef may well be only a variant of Antef, written
with both the sounds a and n of the sign an.
Next, another clue is in the six lost kings of the
Turin papyrus, probably equivalent to the six at
Karnak, followed by Ra-neb-kher and Ra-sankh-ka.
This agrees to Ra-neb-kher Mentuhotep being
outside of the Antef list of Karnak; and as two
Mentuhoteps are allowed for in that, we have three
altogether, which suffices for all historical facts.
There are then the two Mentuhoteps,—Neb-hotep
and Ra-neb-taui,—to be assigned to the second and
fifth places of Karnak; there is not much to show
which is which, but a small consideration points
to Ra-neb-taui being No. 5. He is entitled on
scarabs Neter nefer, "the good god," and we find
this title assumed by the Antef No. 6, next to
No. 5. It is not likely to have been taken by
No. 2 and then dropped again until No. 6. Thus
M. Neb-hotep will be the Mentuhotep who married
queen Khnum-nefer-het-Mentuhotep, recorded on a
pyramidion (Br. Mus. 520). Lastly, we have to divide
between the Antefs in No. 1 and No. 6. These must
be the Ra-seshes-har-apu-maa Antufa of the Abbott
papyrus, and Ra-nub-kheper Antef of the same, who
reigned over fifty years, and whose tomb was found
by Mariette. There is little to settle the attribution
between these; but as Ra-nub-kheper has left many
remains, and a fine tomb, he is rather more likely to
have come later on when the dynasty had more fully
developed, and was evidently more flourishing, than
at the very beginning of it. His long reign of over fifty
years, moreover, gives room for a long co-regency to
account for part of the over forty-six years of his
successor Ra-neb-kher Mentuhotep.

26. We may then say that the data lead us to
the following scheme of this period, referring to the
Kongsbuch, Lieblein's Chronologie, and Livre des
Rois.

Names on Monuments and Remains.