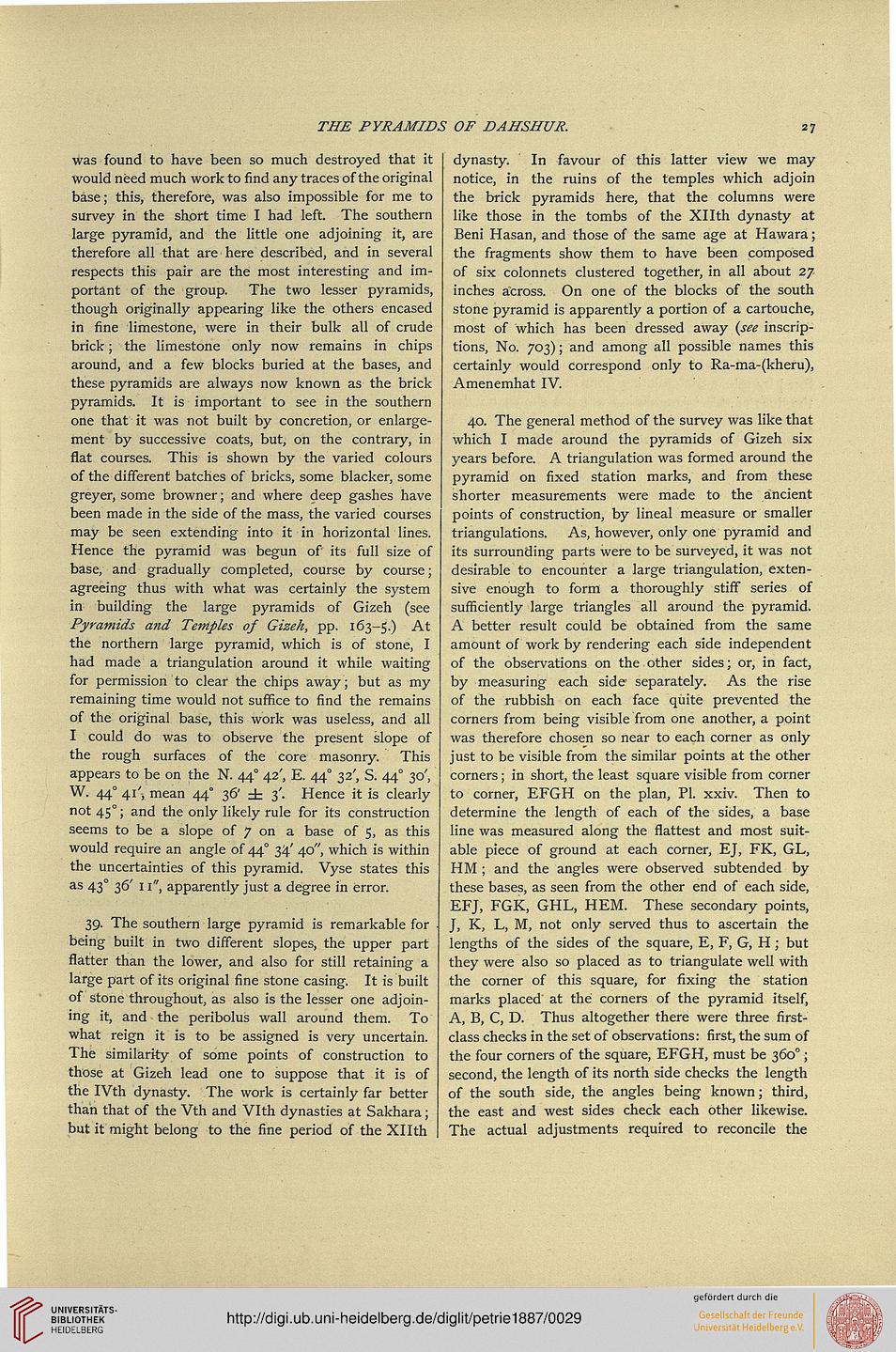 Information about OCR text
THE PYRAMIDS OF DAHSHUR.

was found to have been so much destroyed that it
would need much work to find any traces of the original
base; this, therefore, was also impossible for me to
survey in the short time I had left. The southern
large pyramid, and the little one adjoining it, are
therefore all that are here described, and in several
respects this pair are the most interesting and im-
portant of the group. The two lesser pyramids,
though originally appearing like the others encased
in fine limestone, were in their bulk all of crude
brick; the limestone only now remains in chips
around, and a few blocks buried at the bases, and
these pyramids are always now known as the brick
pyramids. It is important to see in the southern
one that it was not built by concretion, or enlarge-
ment by successive coats, but, on the contrary, in
flat courses. This is shown by the varied colours
of the different batches of bricks, some blacker, some
greyer, some browner; and where deep gashes have
been made in the side of the mass, the varied courses
may be seen extending into it in horizontal lines.
Hence the pyramid was begun of its full size of
base, and gradually completed, course by course;
agreeing thus with what was certainly the system
in building the large pyramids of Gizeh (see
Pyramids and Temples of Gizeh, pp. 163-5.) At
the northern large pyramid, which is of stone, I
had made a triangulation around it while waiting
for permission to clear the chips away; but as my
remaining time would not suffice to find the remains
of the original base, this work was useless, and all
I could do was to observe the present slope of
the rough surfaces of the core masonry. This
appears to be on the N. 44° 42', E. 44° 32', S. 44° 30',
W. 440 41, mean 44° 36' ± 3'. Hence it is clearly
not 45°; and the only likely rule for its construction
seems to be a slope of 7 on a base of 5, as this
would require an angle of 440 34' 40", which is within
the uncertainties of this pyramid. Vyse states this
as 43° 36' 11", apparently just a degree in error.

39. The southern large pyramid is remarkable for
being built in two different slopes, the upper part
flatter than the lower, and also for still retaining a
large part of its original fine stone casing. It is built
of stone throughout, as also is the lesser one adjoin-
ing it, and - the peribolus wall around them. To
what reign it is to be assigned is very uncertain.
The similarity of some points of construction to
those at Gizeh lead one to suppose that it is of
the IVth dynasty. The work is certainly far better
than that of the Vth and Vlth dynasties at Sakhara;
but it might belong to the fine period of the Xllth

dynasty. In favour of this latter view we may
notice, in the ruins of the temples which adjoin
the brick pyramids here, that the columns were
like those in the tombs of the Xllth dynasty at
Beni Hasan, and those of the same age at Hawara;
the fragments show them to have been composed
of six colonnets clustered together, in all about 27
inches across. On one of the blocks of the south
stone pyramid is apparently a portion of a cartouche,
most of which has been dressed away (see inscrip-
tions, No. 703); and among all possible names this
certainly would correspond only to Ra-ma-(kheru),
Amenemhat IV.

40. The general method of the survey was like that
which I made around the pyramids of Gizeh six
years before. A triangulation was formed around the
pyramid on fixed station marks, and from these
shorter measurements were made to the ancient
points of construction, by lineal measure or smaller
triangulations. As, however, only one pyramid and
its surrounding parts were to be surveyed, it was not
desirable to encounter a large triangulation, exten-
sive enough to form a thoroughly stiff series of
sufficiently large triangles all around the pyramid.
A better result could be obtained from the same
amount of work by rendering each side independent
of the observations on the other sides; or, in fact,
by measuring each side separately. As the rise
of the rubbish on each face quite prevented the
corners from being visible from one another, a point
was therefore chosen so near to each corner as only
just to be visible from the similar points at the other
corners; in short, the least square visible from corner
to corner, EFGH on the plan, PI. xxiv. Then to
determine the length of each of the sides, a base
line was measured along the flattest and most suit-
able piece of ground at each corner, EJ, FK, GL,
HM ; and the angles were observed subtended by
these bases, as seen from the other end of each side,
EFJ, FGK, GHL, HEM. These secondary points,
J, K, L, M, not only served thus to ascertain the
lengths of the sides of the square, E, F, G, H; but
they were also so placed as to triangulate well with
the corner of this square, for fixing the station
marks placed* at the corners of the pyramid itself,
A, B, C, D. Thus altogether there were three first-
class checks in the set of observations: first, the sum of
the four corners of the square, EFGH, must be 3600;
second, the length of its north side checks the length
of the south side, the angles being known; third,
the east and west sides check each other likewise.
The actual adjustments required to reconcile the