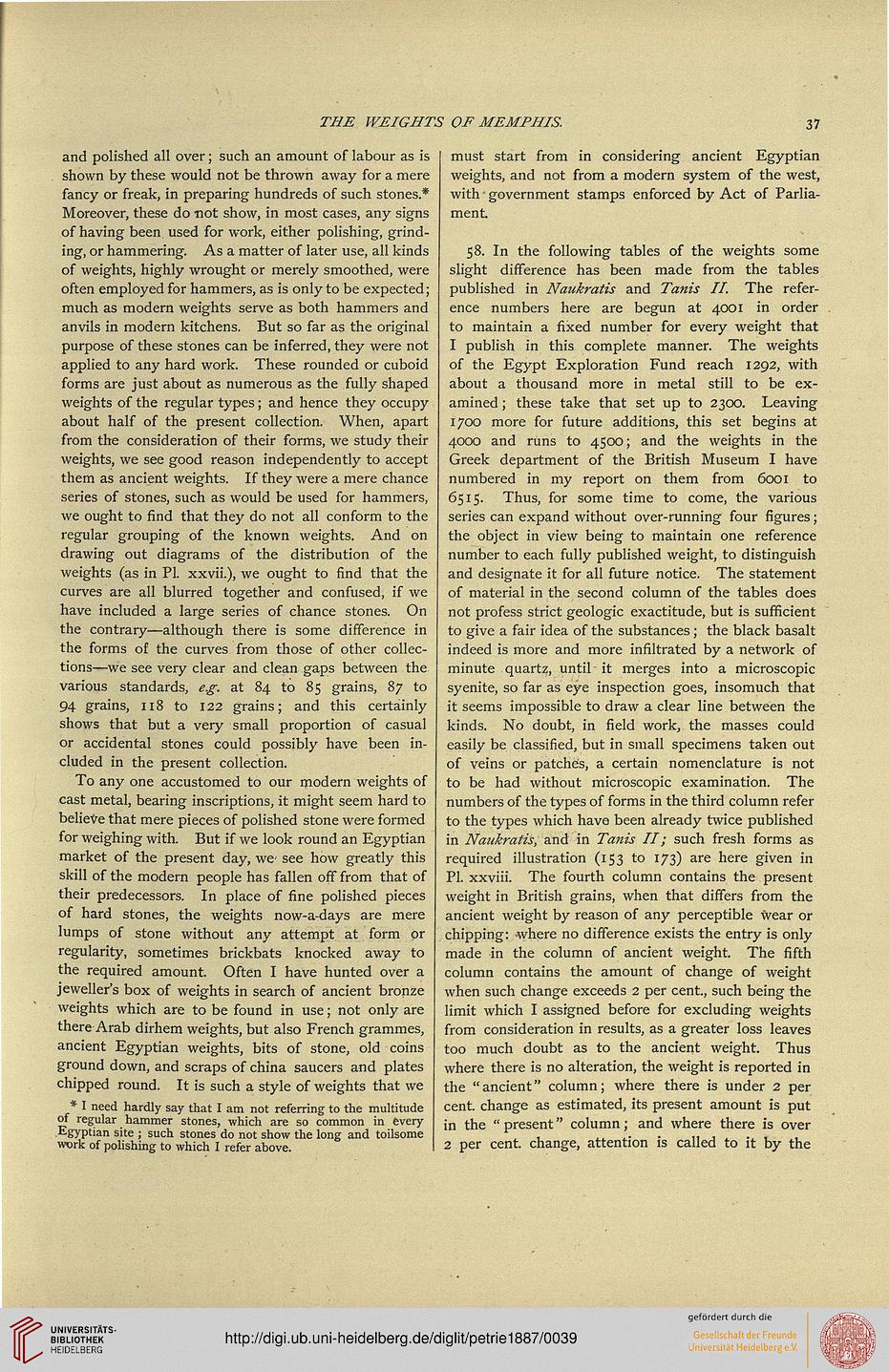 Information about OCR text
THE WEIGHTS OF MEMPHIS.

and polished all over; such an amount of labour as is
shown by these would not be thrown away for a mere
fancy or freak, in preparing hundreds of such stones.*
Moreover, these do -not show, in most cases, any signs
of having been, used for work, either polishing, grind-
ing, or hammering. As a matter of later use, all kinds
of weights, highly wrought or merely smoothed, were
often employed for hammers, as is only to be expected;
much as modern weights serve as both hammers and
anvils in modern kitchens. But so far as the original
purpose of these stones can be inferred, they were not
applied to any hard work. These rounded or cuboid
forms are just about as numerous as the fully shaped
weights of the regular types; and hence they occupy
about half of the present collection. When, apart
from the consideration of their forms, we study their
weights, we see good reason independently to accept
them as ancient weights. If they were a mere chance
series of stones, such as would be used for hammers,
we ought to find that they do not all conform to the
regular grouping of the known weights. And on
drawing out diagrams of the distribution of the
weights (as in PI. xxvii.), we ought to find that the
curves are all blurred together and confused, if we
have included a large series of chance stones. On
the contrary—although there is some difference in
the forms of the curves from those of other collec-
tions—we see very clear and clean gaps between the
various standards, e.g. at 84 to 85 grains, 87 to
94 grains, 118 to 122 grains; and this certainly
shows that but a very small proportion of casual
or accidental stones could possibly have been in-
cluded in the present collection.

To any one accustomed to our modern weights of
cast metal, bearing inscriptions, it might seem hard to
believe that mere pieces of polished stone were formed
for weighing with. But if we look round an Egyptian
market of the present day, wc see how greatly this
skill of the modern people has fallen off from that of
their predecessors. In place of fine polished pieces
of hard stones, the weights now-a-days are mere
lumps of stone without any attempt at form or
regularity, sometimes brickbats knocked away to
the required amount. Often I have hunted over a
jeweller's box of weights in search of ancient bronze
weights which are to be found in use; not only are
there Arab dirhem weights, but also French grammes,
ancient Egyptian weights, bits of stone, old coins
ground down, and scraps of china saucers and plates
chipped round. It is such a style of weights that we

* I need hardly say that I am not referring to the multitude
of regular hammer stones, which are so common in every
Egyptian site ; such stones do not show the long and toilsome
work of polishing to which I refer above.

must start from in considering ancient Egyptian
weights, and not from a modern system of the west,
with - government stamps enforced by Act of Parlia-
ment.

58. In the following tables of the weights some
slight difference has been made from the tables
published in Naukratis and Tarns II. The refer-
ence numbers here are begun at 4001 in order
to maintain a fixed number for every weight that
I publish in this complete manner. The weights
of the Egypt Exploration Fund reach 1292, with
about a thousand more in metal still to be ex-
amined ; these take that set up to 2300. Leaving
1700 more for future additions, this set begins at
4000 and runs to 4500; and the weights in the
Greek department of the British Museum I have
numbered in my report on them from 6001 to
6515. Thus, for some time to come, the various
series can expand without over-running four figures;
the object in view being to maintain one reference
number to each fully published weight, to distinguish
and designate it for all future notice. The statement
of material in the second column of the tables does
not profess strict geologic exactitude, but is sufficient
to give a fair idea of the substances; the black basalt
indeed is more and more infiltrated by a network of
minute quartz, until it merges into a microscopic
syenite, so far as eye inspection goes, insomuch that
it seems impossible to draw a clear line between the
kinds. No doubt, in field work, the masses could
easily be classified, but in small specimens taken out
of veins or patches, a certain nomenclature is not
to be had without microscopic examination. The
numbers of the types of forms in the third column refer
to the types which have been already twice published
in Naukratis, and in Tanis II; such fresh forms as
required illustration (153 to 173) are here given in
PI. xxviii. The fourth column contains the present
weight in British grains, when that differs from the
ancient weight by reason of any perceptible wear or
chipping: where no difference exists the entry is only
made in the column of ancient weight. The fifth
column contains the amount of change of weight
when such change exceeds 2 per cent., such being the
limit which I assigned before for excluding weights
from consideration in results, as a greater loss leaves
too much doubt as to the ancient weight. Thus
where there is no alteration, the weight is reported in
the "ancient" column; where there is under 2 per
cent, change as estimated, its present amount is put
in the " present" column; and where there is over
2 per cent, change, attention is called to it by the