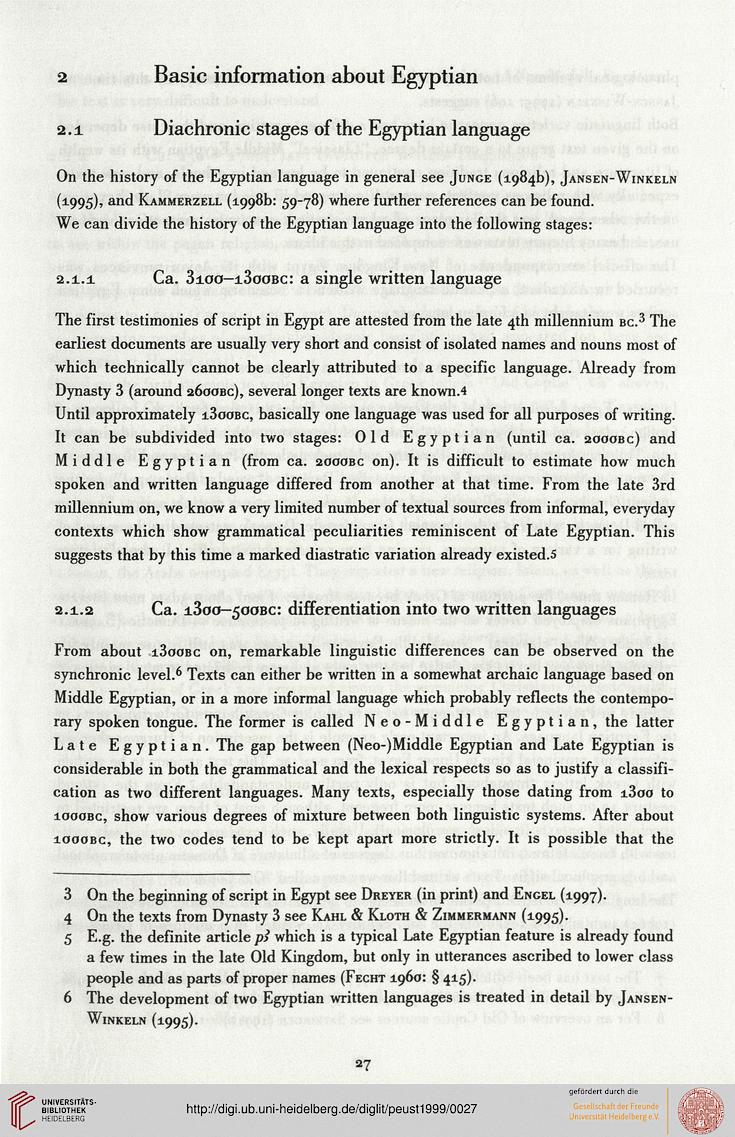 2.1 Diachronic stages of the Egyptian language

The first testimonies of script in Egypt are attested from the late 4th millennium bc.3 The
earliest documents are usually very short and consist of isolated names and nouns most of
which technically cannot be clearly attributed to a specific language. Already from
Dynasty 3 (around 2600BC), several longer texts are known.4

Until approximately i3oobc, basically one language was used for all purposes of writing.
It can be subdivided into two stages: Old Egyptian (until ca. 2000BC) and
Middle Egyptian (from ca. 2000bc on). It is difficult to estimate how much
spoken and written language differed from another at that time. From the late 3rd
millennium on, we know a very limited number of textual sources from informal, everyday
contexts which show grammatical peculiarities reminiscent of Late Egyptian. This
suggests that by this time a marked diastratic variation already existed.5

From about i3oobc on, remarkable linguistic differences can be observed on the
synchronic level.6 Texts can either be written in a somewhat archaic language based on
Middle Egyptian, or in a more informal language which probably reflects the contempo-
rary spoken tongue. The former is called Neo-Middle Egyptian, the latter
Late Egyptian. The gap between (Neo-)Middle Egyptian and Late Egyptian is
considerable in both the grammatical and the lexical respects so as to justify a classifi-
cation as two different languages. Many texts, especially those dating from i3oo to
iooobc, show various degrees of mixture between both linguistic systems. After about
iooobc, the two codes tend to be kept apart more strictly. It is possible that the

5 E.g. the definite article p> which is a typical Late Egyptian feature is already found
a few times in the late Old Kingdom, but only in utterances ascribed to lower class
people and as parts of proper names (Fecht i960: § 415).

6 The development of two Egyptian written languages is treated in detail by Jansen-
Winkeln (1995).