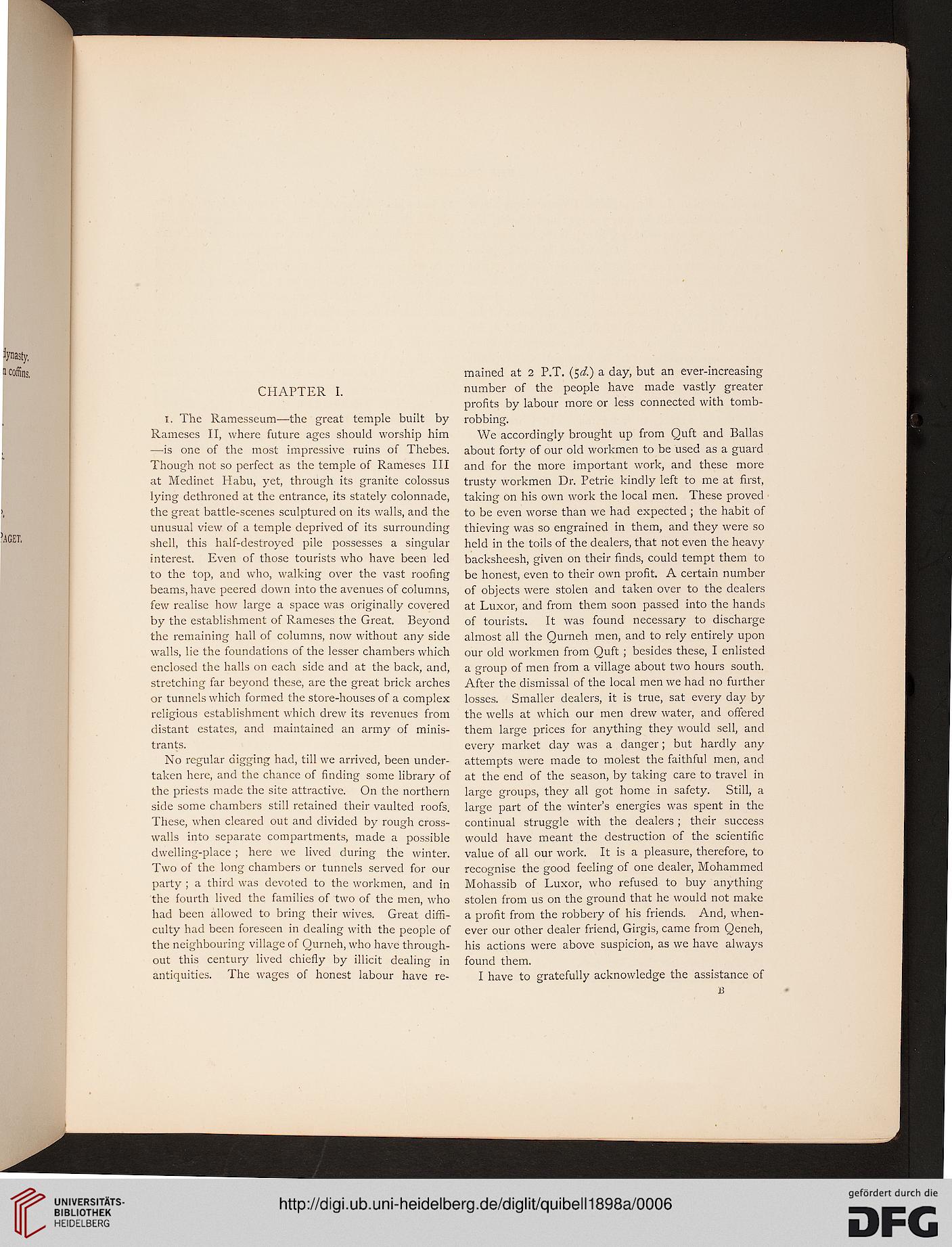 I. The Ramesseum—the great temple built by
Rameses II, where future ages should worship him
—is one of the most impressive ruins of Thebes.
Though not so perfect as the temple of Rameses III
at Mcdinet Habu, yet, through its granite colossus
lying dethroned at the entrance, its stately colonnade,
the great battle-scenes sculptured on its walls, and the
unusual view of a temple deprived of its surrounding
shell, this half-destroyed pile possesses a singular
interest. Even of those tourists who have been led
to the top, and who, walking over the vast roofing
beams, have peered down into the avenues of columns,
few realise how large a space was originally covered
by the establishment of Rameses the Great. Beyond
the remaining hall of columns, now without any side
walls, lie the foundations of the lesser chambers which
enclosed the halls on each side and at the back, and,
stretching far beyond these, are the great brick arches
or tunnels which formed the store-houses of a complex
religious establishment which drew its revenues from
distant estates, and maintained an army of minis-
trants.

No regular digging had, till we arrived, been under-
taken here, and the chance of finding some library of
the priests made the site attractive. On the northern
side some chambers still retained their vaulted roofs.
These, when cleared out and divided by rough cross-
walls into separate compartments, made a possible
dwelling-place ; here we lived during the winter.
Two of the long chambers or tunnels served for our
party ; a third was devoted to the workmen, and in
the fourth lived the families of two of the men, who
had been allowed to bring their wives. Great diffi-
culty had been foreseen in dealing with the people of
the neighbouring village of Qurneh, who have through-
out this century lived chiefly by illicit dealing in
antiquities. The wages of honest labour have re-

mained at 2 P.T. ($d.) a day, but an ever-increasing
number of the people have made vastly greater
profits by labour more or less connected with tomb-
robbing.

We accordingly brought up from Quft and Ballas
about forty of our old workmen to be used as a guard
and for the more important work, and these more
trusty workmen Dr. Petrie kindly left to me at first,
taking on his own work the local men. These proved
to be even worse than we had expected ; the habit of
thieving was so engrained in them, and they were so
held in the toils of the dealers, that not even the heavy
backsheesh, given on their finds, could tempt them to
be honest, even to their own profit. A certain number
of objects were stolen and taken over to the dealers
at Luxor, and from them soon passed into the hands
of tourists. It was found necessary to discharge
almost all the Qurneh men, and to rely entirely upon
our old workmen from Quft ; besides these, I enlisted
a group of men from a village about two hours south.
After the dismissal of the local men we had no further
losses. Smaller dealers, it is true, sat every day by
the wells at which our men drew water, and offered
them large prices for anything they would sell, and
every market day was a danger; but hardly any
attempts were made to molest the faithful men, and
at the end of the season, by taking care to travel in
large groups, they all got home in safety. Still, a
large part of the winter's energies was spent in the
continual struggle with the dealers ; their success
would have meant the destruction of the scientific
value of all our work. It is a pleasure, therefore, to
recognise the good feeling of one dealer, Mohammed
Mohassib of Luxor, who refused to buy anything
stolen from us on the ground that he would not make
a profit from the robbery of his friends. And, when-
ever our other dealer friend, Girgis, came from Oeneh,
his actions were above suspicion, as we have always
found them.

I have to gratefully acknowledge the assistance of