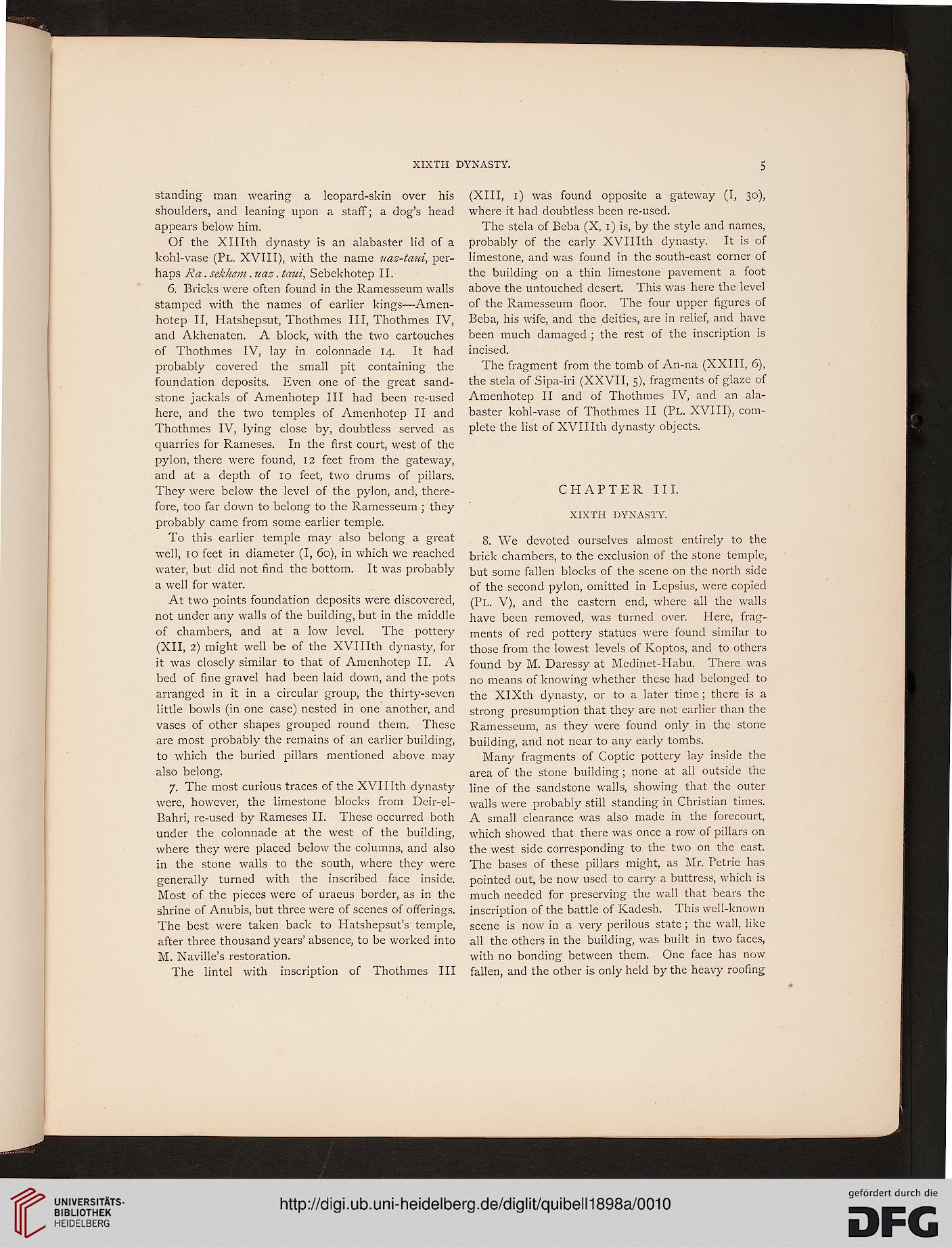 standing man wearing a leopard-skin over his
shoulders, and leaning upon a staff; a dog's head
appears below him.

Of the XHIth dynasty is an alabaster lid of a
kohl-vase (PL. XVIII), with the name uaz-taui, per-
haps Ra. sekhem. uaz. taui, Sebekhotep II.

6. Bricks were often found in the Ramesseum walls
stamped with the names of earlier kings—Amen-
hotep II, Hatshepsut, Thothmes III, Thothmes IV,
and Akhenaten. A block, with the two cartouches
of Thothmes IV, lay in colonnade 14. It had
probably covered the small pit containing the
foundation deposits. Even one of the great sand-
stone jackals of Amenhotep III had been re-used
here, and the two temples of Amenhotep II and
Thothmes IV, lying close by, doubtless served as
quarries for Rameses. In the first court, west of the
pylon, there were found, 12 feet from the gateway,
and at a depth of 10 feet, two drums of pillars.
They were below the level of the pylon, and, there-
fore, too far down to belong to the Ramesseum ; they
probably came from some earlier temple.

To this earlier temple may also belong a great
well, 10 feet in diameter (I, 60), in which we reached
water, but did not find the bottom. It was probably
a well for water.

At two points foundation deposits were discovered,
not under any walls of the building, but in the middle
of chambers, and at a low level. The pottery
(XII, 2) might well be of the XVIIIth dynasty, for
it was closely similar to that of Amenhotep II. A
bed of fine gravel had been laid down, and the pots
arranged in it in a circular group, the thirty-seven
little bowls (in one case) nested in one another, and
vases of other shapes grouped round them. These
are most probably the remains of an earlier building,
to which the buried pillars mentioned above may
also belong.

7. The most curious traces of the XVIIIth dynasty
were, however, the limestone blocks from Deir-el-
Bahri, re-used by Rameses II. These occurred both
under the colonnade at the west of the building,
where they were placed below the columns, and also
in the stone walls to the south, where they were
generally turned with the inscribed face inside.
Most of the pieces were of uraeus border, as in the
shrine of Anubis, but three were of scenes of offerings.
The best were taken back to Hatshepsut's temple,
after three thousand years' absence, to be worked into
M. Naville's restoration.

The lintel with inscription of Thothmes III

The stela of Beba (X, 1) is, by the style and names,
probably of the early XVIIIth dynasty. It is of
limestone, and was found in the south-east corner of
the building on a thin limestone pavement a foot
above the untouched desert. This was here the level
of the Ramesseum floor. The four upper figures of
Beba, his wife, and the deities, are in relief, and have
been much damaged ; the rest of the inscription is
incised.

The fragment from the tomb of An-na (XXIII, 6),
the stela of Sipa-iri (XXVII, 5), fragments of glaze of
Amenhotep II and of Thothmes IV, and an ala-
baster kohl-vase of Thothmes II (PL. XVIII), com-
plete the list of XVIIIth dynasty objects.

8. We devoted ourselves almost entirely to the
brick chambers, to the exclusion of the stone temple,
but some fallen blocks of the scene on the north side
of the second pylon, omitted in Lepsius, were copied
(PL. V), and the eastern end, where all the walls
have been removed, was turned over. Here, frag-
ments of red pottery statues were found similar to
those from the lowest levels of Koptos, and to others
found by M. Daressy at Mcdinet-Habu. There was
no means of knowing whether these had belonged to
the XlXth dynasty, or to a later time ; there is a
strong presumption that they are not earlier than the
Ramesseum, as they were found only in the stone
building, and not near to any early tombs.

Many fragments of Coptic pottery lay inside the
area of the stone building ; none at all outside the
line of the sandstone walls, showing that the outer
walls were probably still standing in Christian times.
A small clearance was also made in the forecourt,
which showed that there was once a row of pillars on
the west side corresponding to the two on the east.
The bases of these pillars might, as Mr. Petrie has
pointed out, be now used to carry a buttress, which is
much needed for preserving the wall that bears the
inscription of the battle of Kadesh. This well-known
scene is now in a very perilous state ; the wall, like
all the others in the building, was built in two faces,
with no bonding between them. One face has now
fallen, and the other is only held by the heavy roofing