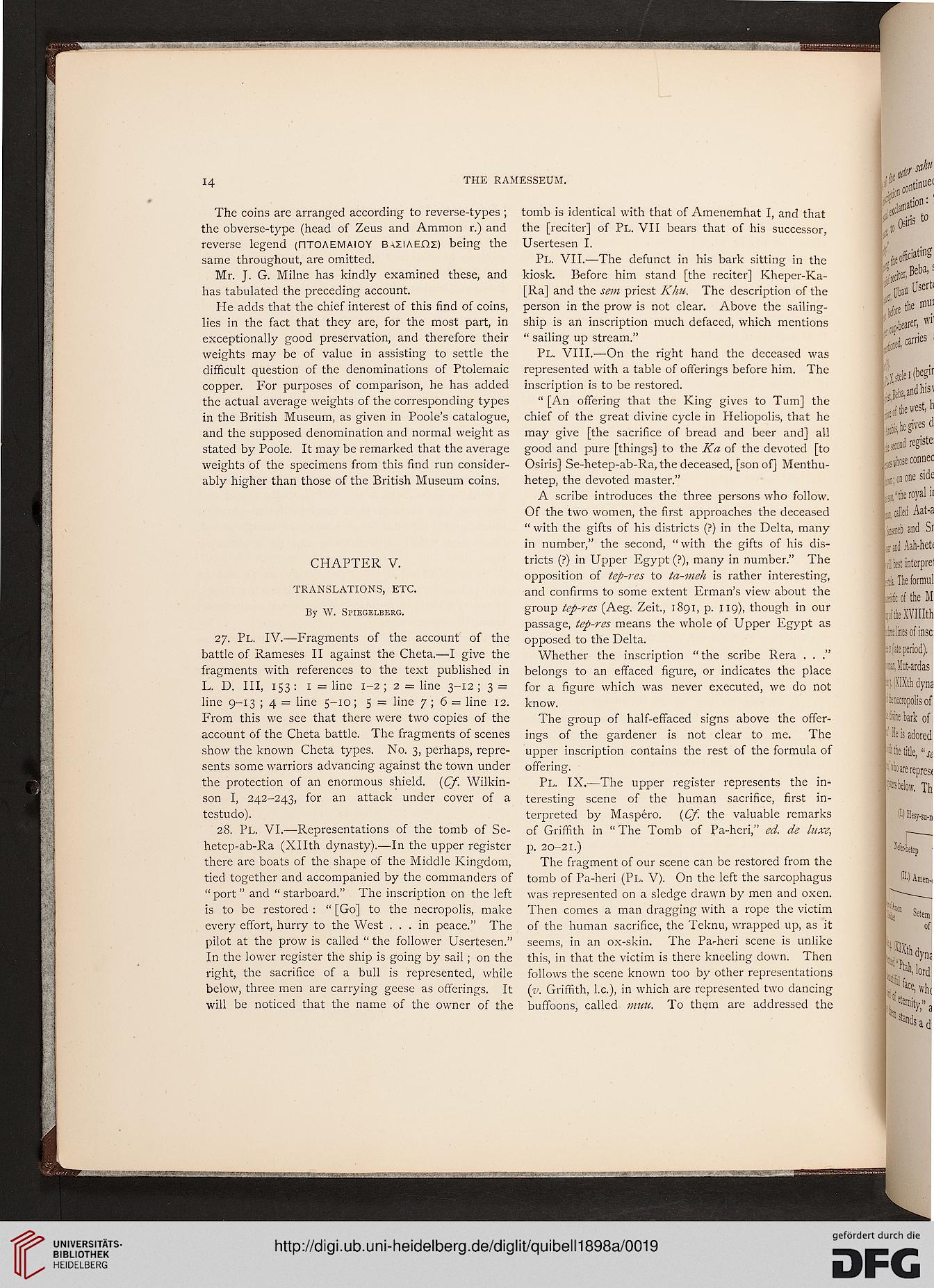 The coins are arranged according to reverse-types ;
the obverse-type (head of Zeus and Ammon r.) and
reverse legend (nTOAEMAlOY BaZIAEQZ) being the
same throughout, are omitted.

Mr. J. G. Milne has kindly examined these, and
has tabulated the preceding account.

He adds that the chief interest of this find of coins,
lies in the fact that they are, for the most part, in
exceptionally good preservation, and therefore their
weights may be of value in assisting to settle the
difficult question of the denominations of Ptolemaic
copper. For purposes of comparison, he has added
the actual average weights of the corresponding types
in the British Museum, as given in Poole's catalogue,
and the supposed denomination and normal weight as
stated by Poole. It may be remarked that the average
weights of the specimens from this find run consider-
ably higher than those of the British Museum coins.

28. Pl. VI.—Representations of the tomb of Se-
hetep-ab-Ra (Xllth dynasty).—In the upper register
there are boats of the shape of the Middle Kingdom,
tied together and accompanied by the commanders of
" port " and " starboard." The inscription on the left
is to be restored : " [Go] to the necropolis, make
every effort, hurry to the West ... in peace." The
pilot at the prow is called " the follower Usertesen."
In the lower register the ship is going by sail; on the
right, the sacrifice of a bull is represented, while
below, three men are carrying geese as offerings. It
will be noticed that the name of the owner of the

tomb is identical with that of Amenemhat I, and that
the [reciter] of Pl. VII bears that of his successor,
Usertesen I.

PL. VII.—The defunct in his bark sitting in the
kiosk. Before him stand [the reciter] Kheper-Ka-
[Ra] and the sent priest Khu. The description of the
person in the prow is not clear. Above the sailing-
ship is an inscription much defaced, which mentions
" sailing up stream."

Pl. VIII.—On the right hand the deceased was
represented with a table of offerings before him. The
inscription is to be restored.

" [An offering that the King gives to Turn] the
chief of the great divine cycle in Heliopolis, that he
may give [the sacrifice of bread and beer and] all
good and pure [things] to the Ka of the devoted [to
Osiris] Se-hetep-ab-Ra, the deceased, [son of] Menthu-
hetep, the devoted master."

A scribe introduces the three persons who follow.
Of the two women, the first approaches the deceased
" with the gifts of his districts (?) in the Delta, many
in number," the second, " with the gifts of his dis-
tricts (?) in Upper Egypt (?), many in number." The
opposition of tep-res to ta-meh is rather interesting,
and confirms to some extent Erman's view about the
group tep-res (Aeg. Zeit., 1891, p. 119), though in our
passage, tep-res means the whole of Upper Egypt as
opposed to the Delta.

Whether the inscription " the scribe Rera . . ."
belongs to an effaced figure, or indicates the place
for a figure which was never executed, we do not
know.

The group of half-effaced signs above the offer-
ings of the gardener is not clear to me. The
upper inscription contains the rest of the formula of
offering.

register represents the in-
human sacrifice, first in-
(Cf. the valuable remarks

The fragment of our scene can be restored from the
tomb of Pa-heri (Pl. V). On the left the sarcophagus
was represented on a sledge drawn by men and oxen.
Then comes a man dragging with a rope the victim
of the human sacrifice, the Teknu, wrapped up, as it
seems, in an ox-skin. The Pa-heri scene is unlike
this, in that the victim is there kneeling down. Then
follows the scene known too by other representations
[v. Griffith, I.e.), in which are represented two dancing
buffoons, called mine. To them are addressed the