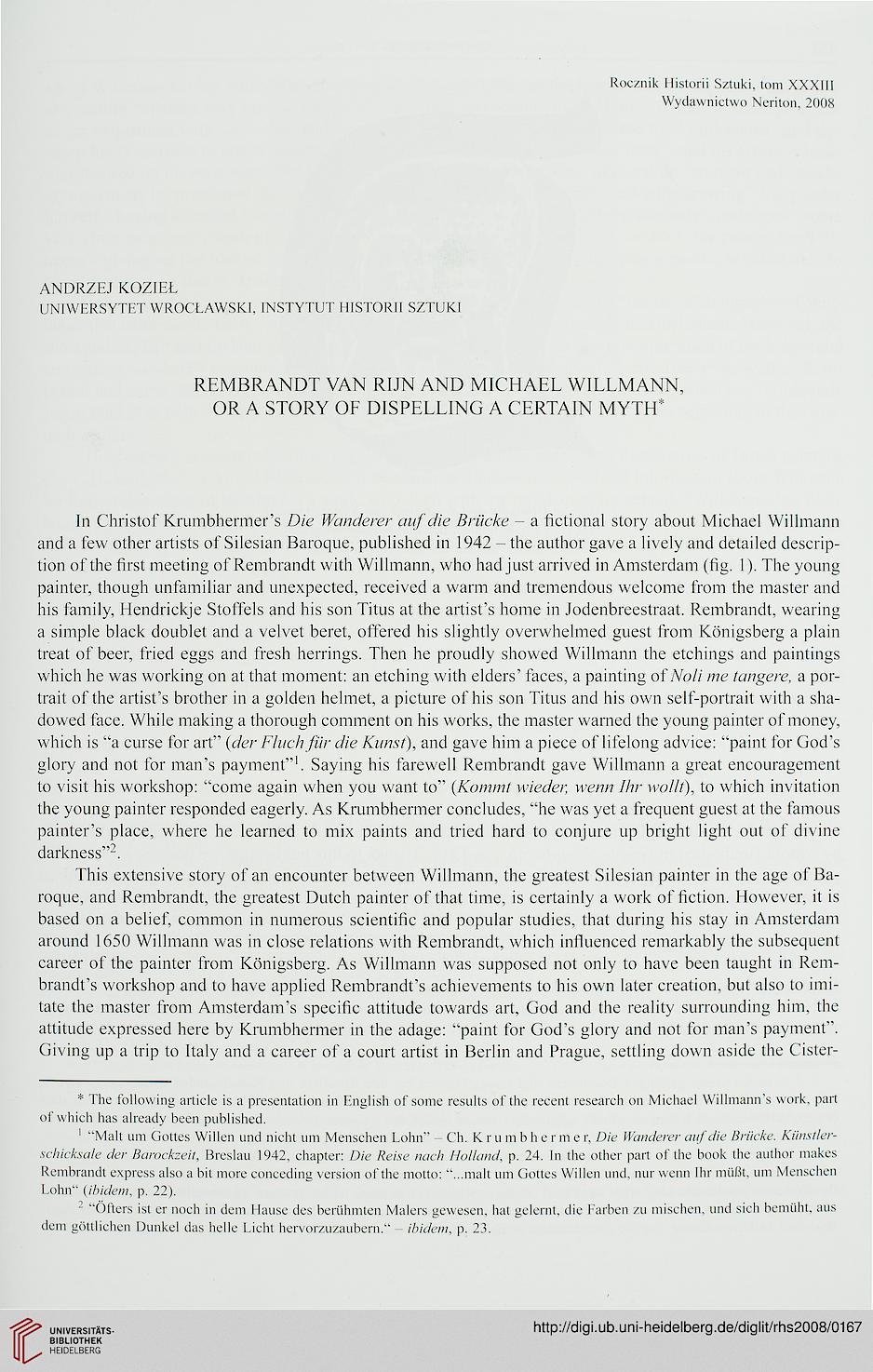 REMBRANDT VAN RUN AND MICHAEL WILLMANN,
OR A STORY OF DISPELLING A CERTAIN MYTH*

In Christof Krumbhermer's Die Wanderer auf die Bruche - a fictional story about Michael Willmann
and a few other artists of Silesian Baroque, published in 1942 - the author gave a lively and detailed descrip-
tion of the first meeting of Rembrandt with Willmann, who had just arrived in Amsterdam (fig. 1 ). The young
painter, though unfamiliar and unexpected, received a warm and tremendous welcome from the master and
his family, Hendrickje Stoffels and his son Titus at the artist's home in Jodenbreestraat. Rembrandt, wearing
a simple black doublet and a velvet beret, offered his slightly overwhelmed guest from Kônigsberg a plain
treat of beer, fried eggs and fresh herrings. Then he proudly showed Willmann the etchings and paintings
which he was working on at that moment: an etching with elders' faces, a painting ofNoli me tangere, a por-
trait of the artist's brother in a golden helmet, a picture of his son Titus and his own self-portrait with a sha-
dowed face. While making a thorough comment on his works, the master warned the young painter of money,
which is "a curse for art" (der Fluch fur die Kunst), and gave him a piece of lifelong advice: "paint for God's
glory and not for man's payment"1. Saying his farewell Rembrandt gave Willmann a great encouragement
to visit his workshop: "corne again when you want to" (Kommt wieder, wenn Ihr woîlt), to which invitation
the young painter responded eagerly. As Krumbhermer concludes, "he was yet a fréquent guest at the famous
painter's place, where he learned to mix paints and tried hard to conjure up bright light out of divine
darkness"2.

This extensive story of an encounter between Willmann, the greatest Silesian painter in the âge of Ba-
roque, and Rembrandt, the greatest Dutch painter of that time, is certainly a work of fiction. However, it is
based on a belief, common in numerous scientific and popular studies, that during his stay in Amsterdam
around 1650 Willmann was in close relations with Rembrandt, which influenced remarkably the subséquent
career of the painter from Kônigsberg. As Willmann was supposed not only to have been taught in Rem-
brandt's workshop and to have applied Rembrandt's achievements to his own later création, but also to imi-
tate the master from Amsterdam's spécifie attitude towards art, God and the reality surrounding him, the
attitude expressed here by Krumbhermer in the adage: "paint for God's glory and not for man's payment".
Giving up a trip to Italy and a career of a court artist in Berlin and Prague, settling down aside the Cister-

* The following article is a présentation in English of some results of the récent research on Michael Willmann's w ork, part
of which has already been published.